The upwelling of material deep in Earth’s mantle can produce volcanoes • Earth.com 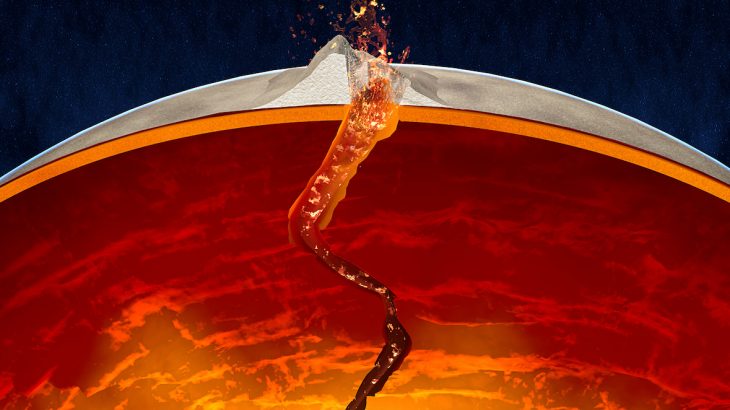 Deep in the ocean below Bermuda, geoscientists have found the first direct evidence that material from deep within Earth’s mantle can gradually seep up through the surface to form volcanoes. This material is located in a part of the mantle known as the transition zone, which is a layer rich in water, crystals, and melted rock.

Volcanoes are known to form when tectonic plates collide. However, the finding that material percolating 250 to 400 miles beneath the planet’s crust can produce volcanoes is a new discovery.

Study senior author Esteban Gazel is an associate professor in the Department of Earth and Atmospheric Sciences at Cornell University.

“We found a new way to make volcanoes. This is the first time we found a clear indication from the transition zone deep in the Earth’s mantle that volcanoes can form this way,” said Professor Gazel. “We were expecting our data to show the volcano was a mantle plume formation – an upwelling from the deeper mantle – just like it is in Hawaii.”

The researchers used a 2,600-foot core sample that had been drilled in 1972 to examine isotopes, trace elements, and evidence of volatile material. The assessment provided the team with a volcanic history of Bermuda.

The study revealed that a disturbance in the transition zone 30 million years ago caused an upwelling of magma material that formed a now-dormant volcano under the Atlantic Ocean and then formed Bermuda.

“I first suspected that Bermuda’s volcanic past was special as I sampled the core and noticed the diverse textures and mineralogy preserved in the different lava flows,” said study co-author Sarah Mazza of the University of Münster. “We quickly confirmed extreme enrichments in trace element compositions. It was exciting going over our first results … the mysteries of Bermuda started to unfold.”

Even though isotopes of oceanic lavas have been analyzed for more than five decades, the extreme isotopes measured in the Bermuda lava core had not been seen before. It was these unusual isotopic compositions that allowed the scientists to identify the unique source of the lava.

According to Professor Gazel, the research provides a new connection between the transition zone layer and volcanoes on the surface of Earth.

“With this work we can demonstrate that the Earth’s transition zone is an extreme chemical reservoir. We are now just now beginning to recognize its importance in terms of global geodynamics and even volcanism,” said Professor Gazel.

“Our next step is to examine more locations to determine the difference between geological processes that can result in intraplate volcanoes and determine the role of the mantle’s transition zone in the evolution of our planet.”