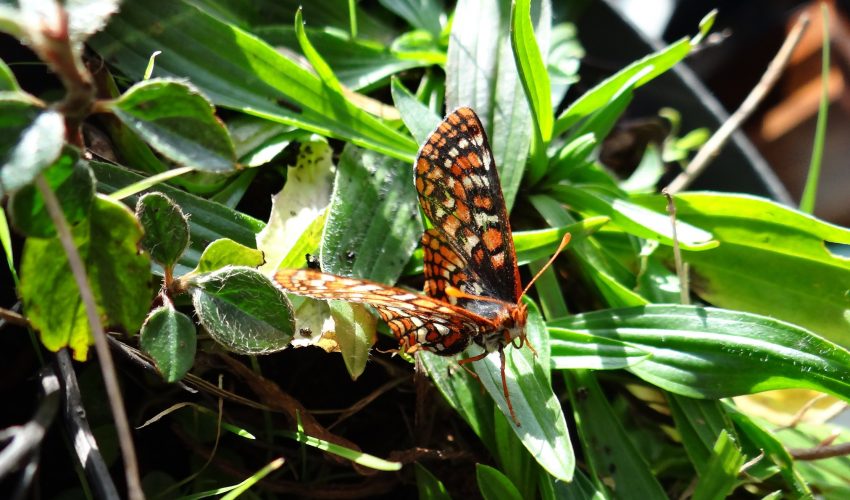 Based on over 30 years of documentation, a team of experts is reporting that wild species which rapidly adapt to human activities are in jeopardy. The researchers found that when human practices suddenly change, dependent species can disappear.

In 1993, the research team theorized that a large population of North American butterfly would become locally extinct after being introduced to a European weed that the species had grown to rely on. Just as the experts predicted, the butterflies vanished when humans no longer made the plant available to them.

The rise of cattle ranching more than 100 years ago set this eco-evolutionary trap into motion, and biologists believe that this process is the underlying cause of many local extinctions across Europe.

The current investigation was focused on changes in the diet of Edith’s checkerspot, Euphydryas editha, in a spring-fed meadow on a ranch in Nevada.

The narrow-leaved plantain, which was introduced to the United States in hay brought from Europe, likely arrived in Nevada 100 years ago and has thrived alongside cattle-grazing.

Butterflies discovered right away that their caterpillars survived better on the plantain compared to their traditional host, Collinsia parviflora. By around 2005, the butterflies had become completely dependent upon the plantain.

When the cattle were removed, the plantains became embedded in the grasses that were no longer being grazed and the butterflies soon disappeared.

The Collinsia was unaffected by the removal of the cattle, which means the butterflies could have survived if they had not evolved so rapidly in response to the introduction of the plantain.

Around five years after the extinction, Edith’s checkerspots recolonized the meadow and were all found feeding on Collinsia. Scientists believe this colony represents a new population, and that the previous lineage of butterflies no longer exists.

Study lead author Michael C. Singer is a professor at the University of Plymouth who has been studying the diet of Edith’s checkerspot for more than 50 years.

“This is a clear example of how humans are able to change habitats faster than even rapidly-evolving species can change their behavior. This cannot be not an isolated phenomenon, so unless we become aware of the potential consequences of such actions we will continue to inadvertently cause population extinctions of native species, without recognizing what we are doing. Species-level extinctions are possible when human activities are synchronized across wide areas.”

Study co-author Camille Parmesan is a lead contributor to the Intergovernmental Panel on Climate Change. She explained that the findings of the study have implications beyond the scope of changes to farming practices.

“Climate warming is another form of anthropogenic change that is occurring faster than past natural changes, and is likely to cause problems for species whose evolution is unable to keep pace. If climate change were natural, it is likely that many wild species would be able to adapt, both through current evolution and through flexible changes in behaviour and life history. But human-driven climate change is occurring at a much faster rate than most past major climatic shifts.”

“Ecologists have long been arguing that this is likely to lead to more extinctions than have happened with past climatic changes and this study supports the arguments that rapid climate change will prove detrimental to biodiversity both in the short and long term.”