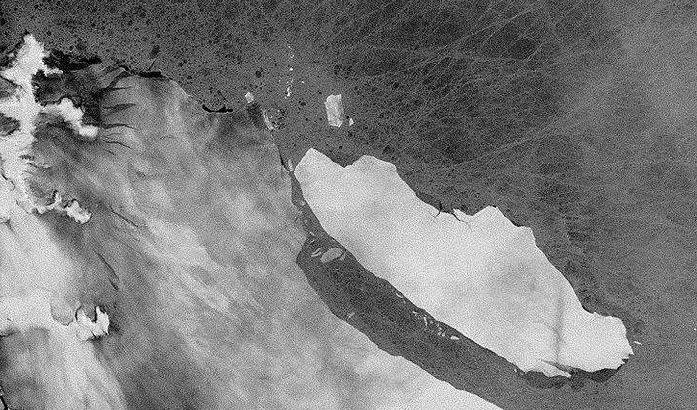 Defying all expectations, the Delaware-sized iceberg that broke away from the Larson C ice shelf in Antarctica two years ago has remained relatively intact and is on the move.

When A-68 first calved from the ice shelf, the biggest concerns were that the iceberg would break up into smaller pieces which would drift into international shipping lanes and present a hazard for vessels.

That hasn’t quite happened yet. Instead, the iceberg, which measures 100 miles long and 656 feet thick, got stuck after it initially calved from the ice shelf and rotated on its axis as it dislodged nearly a year later.

Now, satellite footage of A-68’s movement taken by the European Space Agency’s Copernicus Mission and compiled together by Adrian Luckman, a geography professor at Swansea University in Wales, tracks the glacier’s 155-mile trek.

A-68 is currently drifting north, carried by the Weddell Gyre ocean current.

The animation, which is posted on his glacier gallery blog, is the result of stitching together hundreds of Sentinel-1 satellite microwave images together in 5-day intervals.

“At 160 kilometres long by only a couple of hundred metres thick, the aspect ratio of Iceberg A68 is more like a credit card than a typically imagined iceberg,” Luckman wrote. “All the more surprising then, that despite grounding on the sea floor several times, Iceberg A68 remains in pretty much the same shape that it had when it calved away 2 years ago.”

Calving events are common, but A-68’s sheer size and mass stunned the scientific community when it was first discovered. Climate change will likely increase the rate of calving events and speed up melting in Greenland and Antarctica.