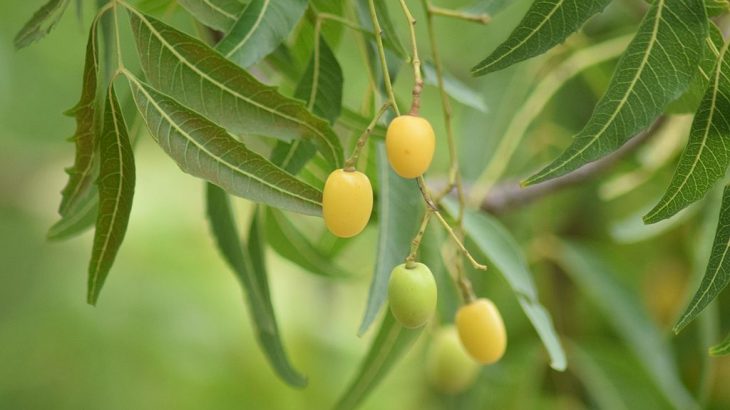 Neem oil is something of a panacea for gardeners. Neem oil uses range from killing unwanted insects, to preventing powdery mildew, to getting rid of nematodes. It’s a great, natural first line of defense against most of the common garden diseases and pests.

History of the Neem Oil Tree

Neem oil comes from the seeds of the neem tree, which is native to the Indian subcontinent. Indians recognized the therapeutic value of neem at least 4,500 years ago, where it had all sorts of medical uses in the ancient Indus valley civilizations.

As Indians moved around the world in the 20th century, they brought the neem tree with them. It now grows in at least 30 countries, mostly in the tropics and subtropics. The neem tree grows quickly, making it valuable for firewood. As mentioned above, it also has great medicinal value. The tree provides effective shade, as well. Neem can grow in hot places, up to 120F, with relatively little water.

Some African nations that border the southern edge of the Saharan desert are planting walls of neem trees to prevent the desert from expanding into their country as a result of human-made climate change.

Being such a climate-resilient tree with tons of medical and agricultural uses, it’s understandable that the UN would designate the neem tree as the “tree of the 21st century.” 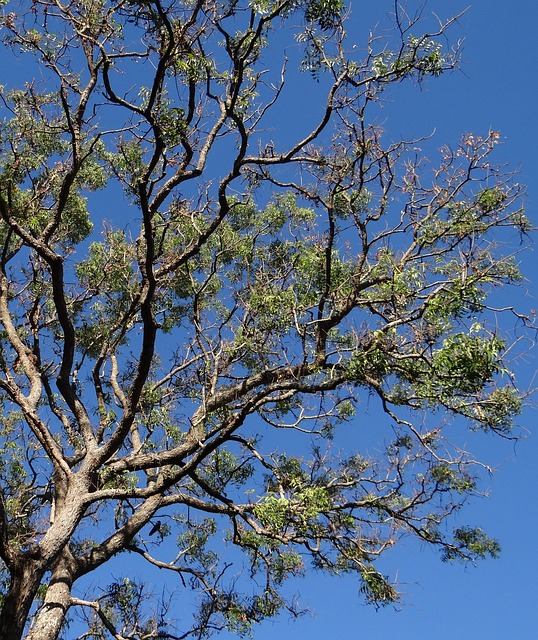 How Does Neem Oil Work?

Well, we don’t really know. The most important compound in neem oil seems to be azadiratchin. Azaricatchin is a very complex organic molecule, with many functional groups. A functional group is part of a molecule that can interact with another molecule, such as oxygen, carbon dioxide, or perhaps a neurotransmitter. Because azaricatchin has an unusual amount of these functional groups, it is able to perform in a wide variety of ways.

The neem tree evolved to contain this molecule to deter the desert locust. This bug can destroy trees in India, but they avoid the neem tree at all costs because the azadiratchin will kill them.

Research reveals that azadiratchin can turn off the cells in insects ‘brains’ that cause them to feel hunger or the need to eat. As a result, they starve to death. It is plausible that neem interacts with other insects in completely different ways, due to all of its functional groups.

Neem oil also contains an abundance of other compounds that may explain its ability to apply to so many insects, diseases, and health issues.

Benefits of Neem Oil vs. Other Pesticides and Insecticides

Pesticides and insecticides are meant to kill pests. This means that they are inherently toxic and have an impact on the greater ecosystem than just the crops they get sprayed on. You’ve probably heard of the great bee die-off. A large part of the blame for our bees dying should be put on pesticide use.

These chemicals have destroyed many populations of good pollinators. Pesticides are also verifiably cancer-causing. Moreover, many pests have become resistant to commonly used pesticides and insecticides. This resistance makes them ‘superpests’ because commonly used methods don’t work to control them.

That’s the world of “conventional” insecticides and pesticides.

Neem oil, on the other hand, is 100% natural. Sunlight breaks neem oil down into non-toxic compounds within 100 hours, meaning it is far less likely to contaminate the surrounding environment than manufactured pesticides. 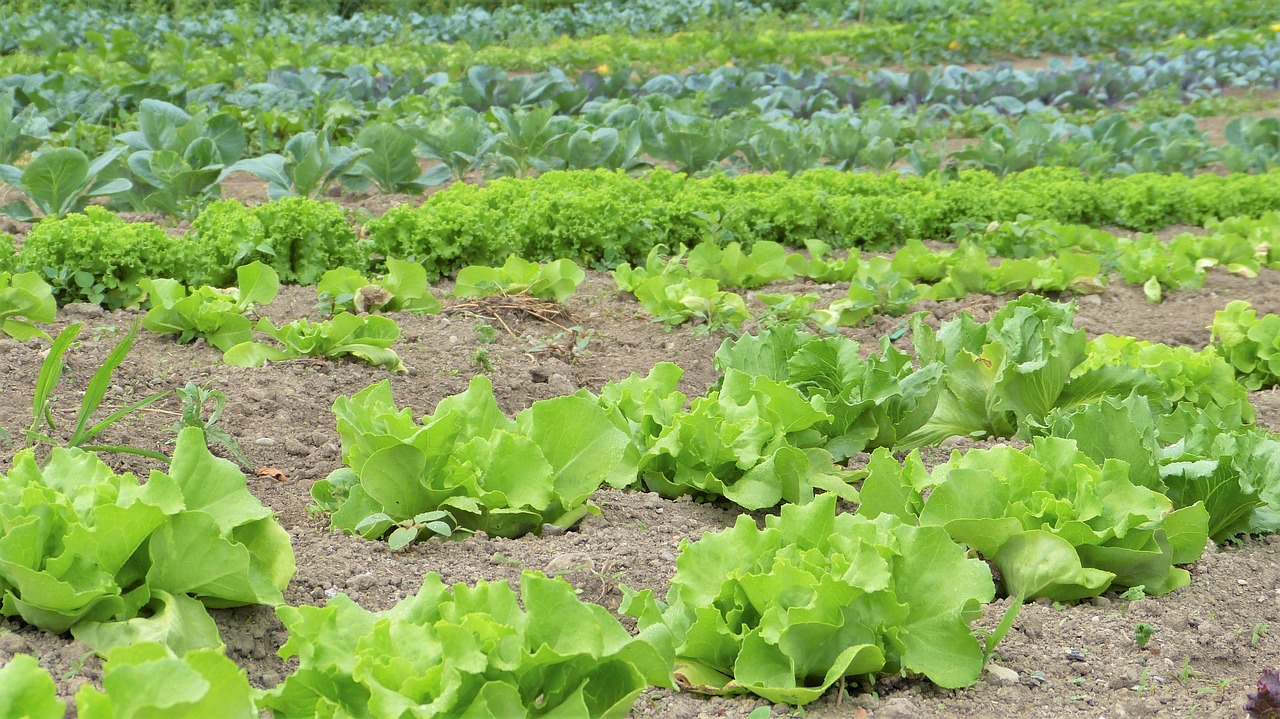 Healthy lettuce grows in a field. Photo by Silvia Rita via Pixabay

Neem is only toxic to the kinds of small insects that eat the oil, meaning it is targeted towards the bad insects (tomato hornworms, aphids, etc.) while having less of an effect on the good insects (bees, earthworms). In addition to being a fungicide, neem also has little toxicity to mammals.

Research has led scientists to determine that neem oil is “quite interesting in terms of its durability” because it appears that pests don’t effectively develop a resistance against it. This could mean that neem oil is a longer-term solution for crop and garden pests that currently used, industrial insecticides.

For the home gardener, neem is the obvious choice for a safe, economic, non-toxic pesticide.

A Short Note on Pesticide Safety

However, do exercise some caution when using neem oil. Wash your hands, don’t use it on dishes you eat from, and only use the concentration recommended on the bottle. Neem can be irritating to the skin and stomach if ingested. As long as you’re careful, you should be fine.

Most pesticides are toxic to eat, so you shouldn’t spray them close to the harvest date of your crops. As we explored before, neem isn’t nearly as toxic as these other pesticides. Since neem oil degrades in about 100 hours, you can use it within a week of harvesting. I wouldn’t use it fewer than seven days before harvest, but conceivably you can use it four days before. This is especially useful if you have a late-season infestation that threatens your crop just before you plan to harvest it. 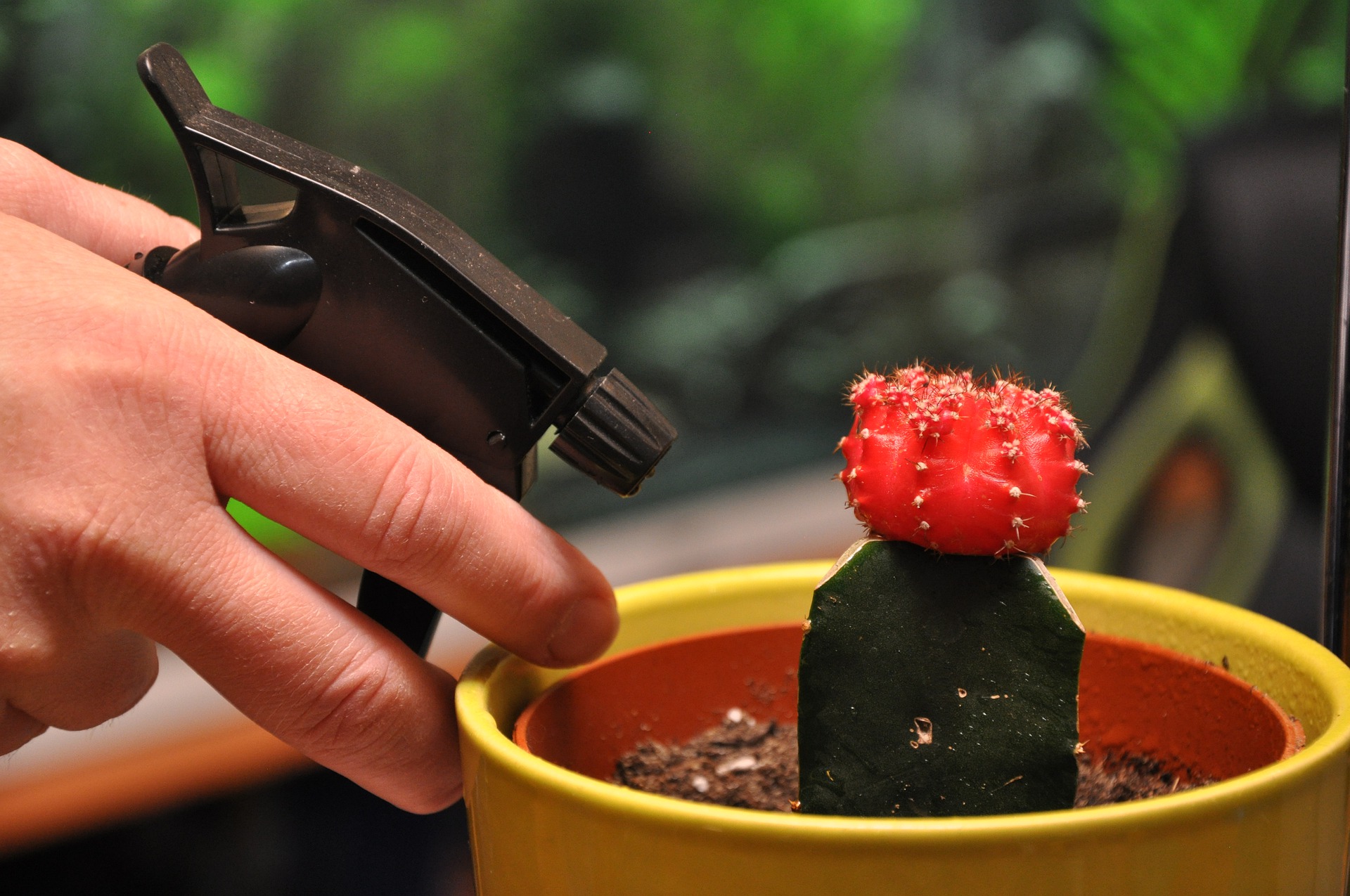 A gardener sprays neem oil on an indoor cactus. Photo by Renate Köppel via Pixabay

How to Use Neem Oil as a Gardener

Now that we understand the neem tree and the background of neem oil, we can jump into the many uses of neem oil for the gardener.

I suggest buying a concentrated version of neem oil that you dilute at home rather than a ‘ready to use’ formula. It’s much cheaper and lasts longer. The ‘ready to use’ neem oil is in a spray bottle that you can use immediately.

If you get the concentrate, measure a dilute solution of neem oil and water in a handheld spray bottle to apply the pesticide. The exact dilution depends on what the product recommends but is usually around two tablespoons of neem oil per gallon of water. Most spray bottles are about one quart, so two teaspoons of neem should be sufficient for a typical spray bottle.

Neem is an oil, so it doesn’t dissolve into water. You must make sure to vigorously shake the bottle before spraying the solution on plants. Some people use a small dash of dish soap or natural soap, like Dr. Bronners, to help distribute the oil in the water better.

Neem works best when applied early in the morning. If you live in a humid area, don’t apply neem in the evening because the added moisture on your plants may make them more vulnerable to diseases during a cool spring or summer night.

Nematodes are tiny worm-like creatures that live in the soil or on your plants. They can suffocate your plant by attacking its root network. They can also act as predators on your plants, killing beneficial insects.

Since nematodes are so small, they are susceptible to neem oil. The larger, beneficial earthworms aren’t hurt as much by neem because they are larger creatures. You can drench the soil with the dilute solution of neem oil to kill nematode eggs. If nematodes are on the leaves, spray the leaves once a week. 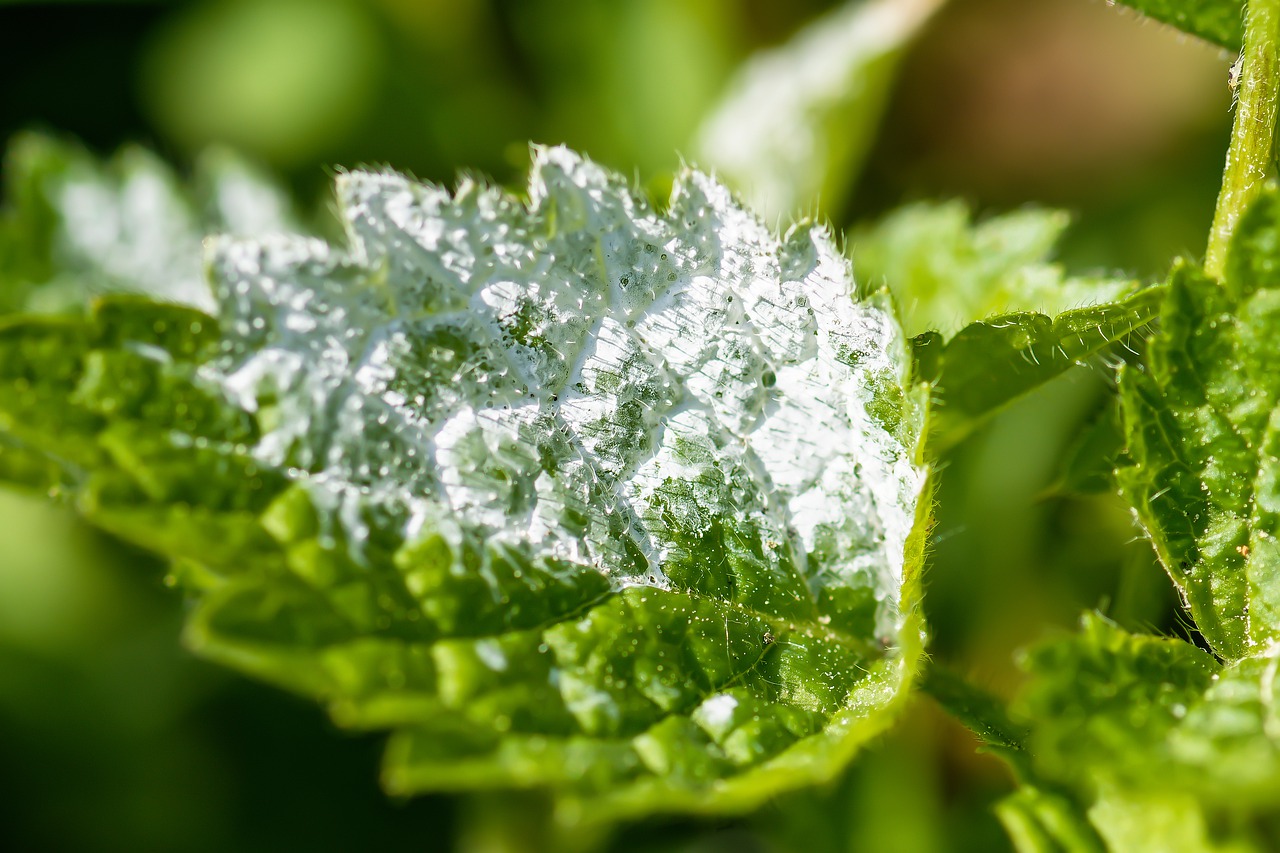 Powdery mildew on a plant. Photo by Willfried Wende via Pixabay

A classic garden fungus, powdery mildew strikes any gardener who lives near the ocean or in a humid place. Powdery mildew usually looks like white mold growing on the leaves. It is genus/family-specific, so it can jump between closely related plant species.

Spraying a plant with neem oil once a week may get rid of powdery mildew. However, if it is late in the season the plant might be dying anyway, so there’s no real point in saving it.

Spider mites are tiny spider relatives that can quickly destroy your garden. To cull them first cut out any parts of plants that are affected by the spider mites. Put this plant material directly into the yard waste bin. You don’t want to give the spider mites a chance to move around your garden by setting the affected material on the ground near your other precious plants.

Next, spray all parts of the affected and surrounding plants (don’t forget under the leaves) with neem oil once a week until the mites are gone.

Fire blight is a bacterial disease the affects fruit trees in the rose family, mostly apple and pear. It hits hardest in wet, cold springs and is rapidly contagious. It’s easier to prevent fire blight rather than treat it.

To prevent fire blight, spray neem oil over the entire tree when you notice the buds starting to swell in the spring. Hit the thick branches and trunks particularly well. This preventative measure works best when combined with other antibacterials, such as a copper spray. 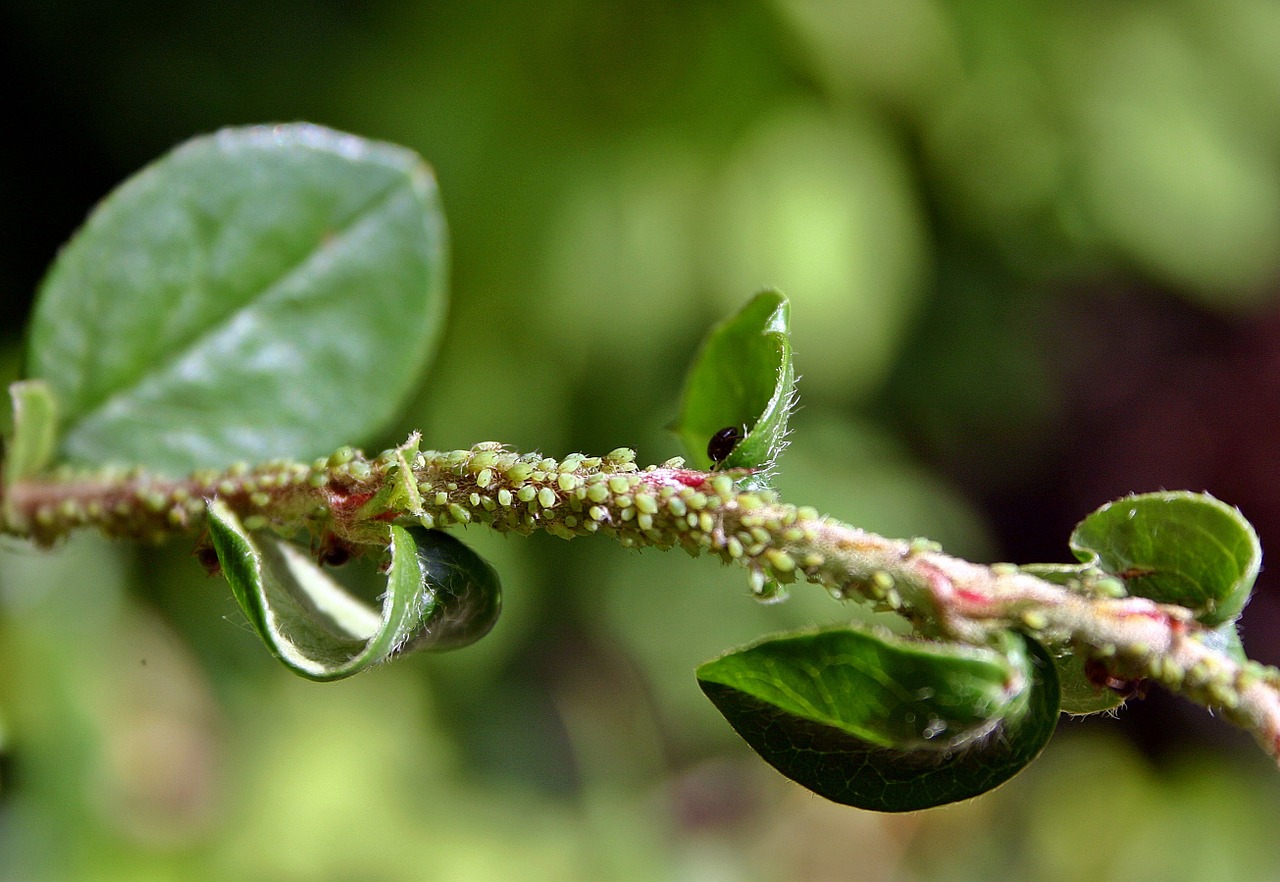 Aphids suck the sap from a plant. Photo by Catkin via Pixabay

Aphids use their little mouths to cut into the plants and suck the sap out of them. If neem oil covers the plant, aphids must ingest it in order to get to the sap. When aphids ingest neem oil, they die.

Spray the entire plant with neem oil every seven days until the aphids are gone. If you wish to use neem as a preventative, spray if every two weeks on the area prone to aphid infestation.

Neem is a great option for houseplant enthusiasts. Since it’s non-toxic, it is safe to use inside if you tend to get any powdery mildew, fungus gnats, or other common houseplant pests. If it’s not too much trouble, take the plants outside to spray them. If not, no worries! It’s fine to spray neem inside your house.

Fungus gnats are annoying tiny bugs that can reproduce prolifically on hot, summer days. They are mostly an issue with indoor houseplants. Their larvae live in the soil and munch on plant roots. The adults fly around fruit or produce on the counter.

To prevent the gnats from getting worse, spray a generous amount of neem oil directly onto the soil of your houseplants every two days for a week to control fungus gnats.

To really destroy the gnats, you can water your plants with a dilute solution of neem oil.

As you can see, neem oil is a fascinating plant with vast potential. Once you begin using neem, you’ll wonder how in the world you ever gardened without it!