All About the Mysterious Komodo Dragon • Earth.com 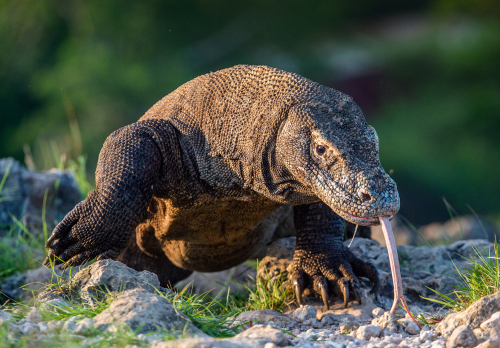 All About the Mysterious Komodo Dragon

Of all the mythical creatures across fantasy and fable, the dragon spans the widest range of cultural lore. Originating in East Asia before charming the medieval societies of Europe, tales of fearsome lizards have dominated storybooks for centuries. But dragons aren’t purely figments of fairytales. The very real and very ferocious Komodo dragon prowls the islands of Indonesia. The Komodo dragon is the largest living lizard. Known for a stealthy hunting strategy, armored skeleton, and merciless bite, this giant reptile is truly a real-life dragon. Listed on the IUCN red list, this massive lizard is more in need of our protection than a contest with a sword and shield. Learn all about the mysterious Komodo dragon with our guide to its ecology and conservation.

What Are Komodo Dragons?

Komodo dragons (Varanus komodoensis) are named after Komodo Island where they are most densely populated. Also called Komodo monitors, they are members of the Varanidae family of monitor lizards. In general, monitor lizards are terrestrial, carnivorous reptiles, distinguished by their long necks, muscular tails, and vicious claws.

Komodo dragons in particular are the world’s largest lizards. According to the Smithsonian National Zoo & Conservation Biology Institue, the larger male Komodo dragons often reach nine feet in length and 150 pounds, with the record held by an individual reached 10.3 feet long and over 360 pounds!

Where to Find Komodo Dragons?

For your dragon quest, don’t bother yourself with Scottish castles or cloud-shrouded mountains in China. The Komodo dragon only lives on a few remote Indonesian islands. There, they have settled into a haven with little human development.

Beautiful views of the Lesser Sunda

Endemic to a handful of islands in the Lesser Sunda Islands including parts of the larger, human-populated island of Flores along with the islands encompassing Komodo National Park (including the island of Komodo, Rinca, and Padar). The dragons are strong swimmers and likely spread amongst the islands by navigating the blue waters between them. Throughout the National Park, the dragons can be found throughout ecosystems, covering the islands more evenly. On Flores however, human development and habitat destruction have pushed the lizards to the southwestern edge.

Habitat of the Komodo Dragon

As you might expect from such weathered and tough-looking creatures, Komodo dragons live in some pretty harsh environments. Located just south of the equator, the dragons’ home temperature averages 80°F year-round. Outside of a brief monsoon season, the typically dry climate limits freshwater availability. In addition to the balmy climate, steep, rocky terrain covers the volcanic islands. The giant monitor lizards don’t seem to mind. They do seem to prefer the more vegetated savanna and forests but can also be found distributed across the entire national park, including the more arid deserts.

Unsurprisingly for this monstrous lizard, Komodo dragons are the apex predator of their island homes. Being so big and ferocious, these carnivores dominate the forests, grasslands, and deserts where they prowl. But they don’t hatch from the egg as the king of the jungle. Juveniles learn to hunt down small invertebrates, lizards, small mammals, and birds while hiding from the cannibalistic adults.

Apart from occasionally eating their own young, the larger adult Komodo dragons pursue much bigger meals. The monitors will kill their own prey and scavenge the carrion of previously dead animals. Some of their favorite large prey include the native Indonesian Timor deer, water buffalo, monkeys, and wild boar. 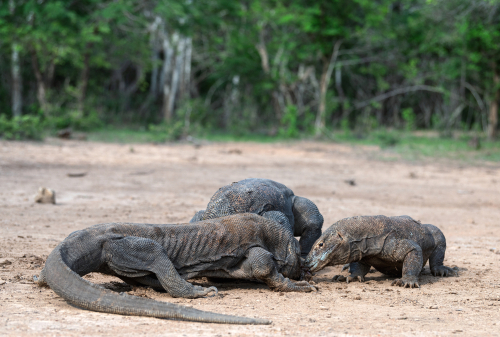 Similar to myths and legends, dragons’ hunting strategy is defined by stealth and power. They can run almost as fast as a human for short sprints (10-13 mph), however, they prefer not to chase their prey. Instead, their hunting technique relies more on ambush and raw strength. Finding the perfect spot for a stake-out, Komodo dragons will wait for potential prey for hours. When the unsuspecting deer or water buffalo crosses their path… Pounce! Not much can defend itself against an armored, 150-pound monster. 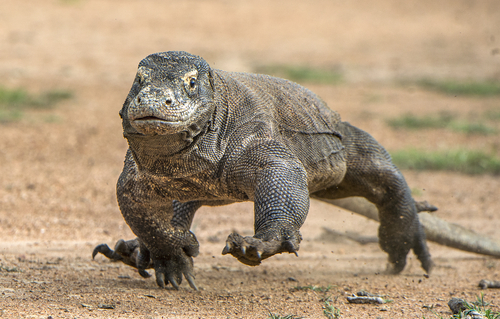 After trapping and killing their prey, Komodo dragons use their fearsome serrated teeth and powerful neck muscles to tear into the flesh. Their stomachs seem to magically expand as they eat, allowing them to put back 80% of their body weight in one sitting. That would be like the average American man-eating over 600 hamburgers for one meal! They clean up their meals too, eating most of the bones, hooves, and intestines. After such a feast, it takes a while for them to be ready for another meal. Often, a dragon will only eat about once a month.

Seemingly the question of the past half-century, there’s been a long-standing debate as to how Komodo dragons kill their prey. The controversy started when an early researcher, Walter Auffenberg, studied dragons in the late 1960s. He observed the pattern of prey animals dying from infections after being bitten by a dragon. The story he brought back from his time in Indonesia described pathogen-packed saliva that the Komodo’s used to their advantage when hunting down prey. More simply, the dragons used bacteria as a sort of venom.

According to a 2009 study by venom scientist Bryan Fry, Komodo dragons have venom glands in the back of their throats. When attacking their prey, their strength, and stealth work in conjunction with a venomous bite. The venom acts as an anticoagulant and shock inducer, meaning the prey’s wounds will continue to bleed. Without clotting, the prey animals will suffer from blood loss. The hungry Komodo dragons use their incredible sense of smell to track them down.

Like their other ecological traits, the Komodo dragon’s life history is fascinating, though a bit gruesome. Males tend to be bigger and bulkier than females though this is difficult to observe with the naked eye. A good hunk of carrion tends to be the choice spot for a hot date. A scavenging frenzy anytime between May and August provides ripe grounds for courtship. Males compete with each other for female attention, grappling with their powerful limbs to overtake an opponent. In fact, Komodo dragons have evolved to have tiny bones embedded under their scales that act as chain mail. Without other known predators, this armor seems to have developed as a result of the dragons’ fights with each other! 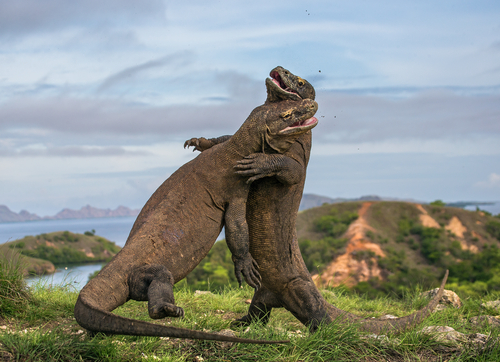 Fun Fact: Female Komodo dragons are able to lay fertilized eggs without the involvement of a male. Called parthenogenesis, dragons are the largest known vertebrate to demonstrate these virgin births.

Life as a Hatchling

In September, the female Komodo dragons will lay a clutch of about 20 eggs on the ground. They will dig a small depression in the soil to protect the eggs, though their favorite spot tends to be the usurped nests of the turkey-like megapode bird. The babies hatch the following April and are promptly on the run. At their miniature size, the hatchlings only hunt insects and are especially vulnerable. In fact, adult Komodos are cannibalistic and will opportunistically hunt and eat their own young!

The young Komodo dragons take nearly 10 years to mature, then they are ready for their lives as apex predators. With a lifespan of about 30 years, the young that make it to maturity have plenty of time to rule the islands they call home. 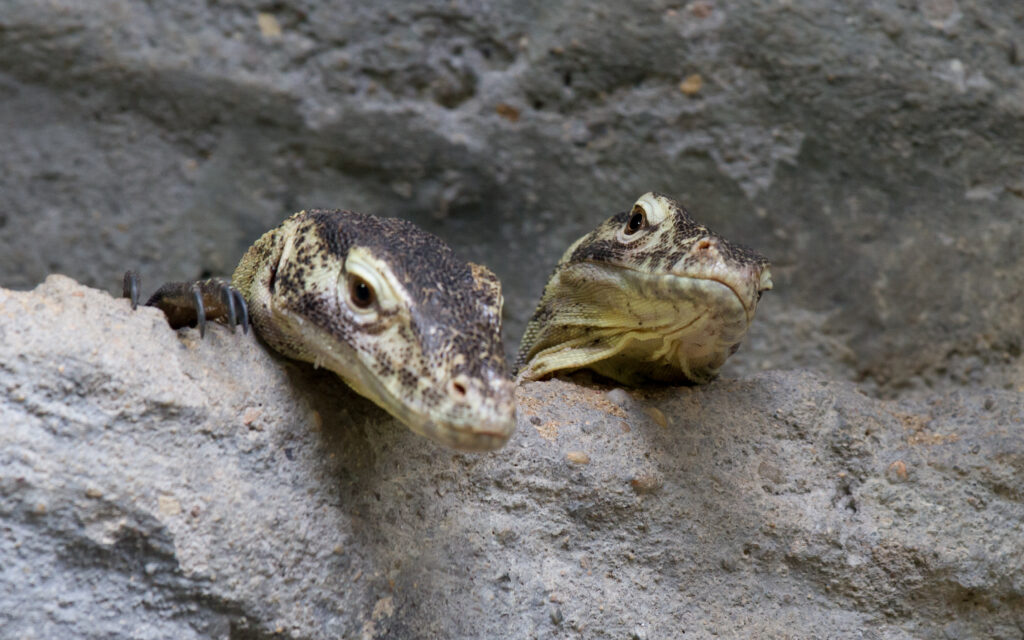 In 1996, the IUCN listed the komodo dragon as a vulnerable species on their red list. However, over fifteen years earlier, the Indonesian government already had a pulse on the conservation status of the giant lizards. In response to their restricting range, the Komodo National Park was established in 1980. People’s presence on the islands has increased by 800% in the last 60 years, so the Komodo’s range in the wild has steadily declined.

In addition to habitat loss, the dragon’s favorite food is disappearing. The Timor deer, valued for its meat and hide, faces population decline due to poaching along with habitat loss. Also listed as vulnerable by the IUCN, the synchronous plight of the Timor deer speaks to the conservation needs across island ecosystems.

Creating an economy based on ecotourism has generally benefitted both the dragons and the people of Indonesia. Since the Lower Sundas are the only place to see Komodo monitors in the wild, folks from around the world have flocked to witness these real-life dragons in their natural environments.

However, complexities in land conservation put a damper on the preservation of the Komodo dragon habitat. In creating the national park, the government displaced the Ata Modo people who have lived on the islands for thousands of years. Preserving the island’s ecosystems (to the government’s standards) came at the sacrifice of the native people’s culture. Not only do the Ata Modo also support the preservation of the Komodo dragon, but they are also the dragon experts, having lived with reverence for the giant lizards throughout their history.

To create a balance between the need to conserve the ecosystems the native people are using their own experience and knowledge of the region to create more encompassing and impactful conservation efforts for the archipelago. Since the park’s formation, the native people have used their tribal rights to assert their voices in the conservation efforts. As climate change continues to shrink the dragon’s habitat, a collaboration between the government and tribes is necessary to preserve this incredible species.

Thanks to the advocacy of the Indonesian government and the native people of the Lesser Sunda Islands, the remaining populations of the Komodo dragons have mostly stabilized. Ecotourism opportunities on the islands let dragon-lovers and ecologists from around the world witness these mystical creatures in real life. And while the draw may be the charismatic predators, the blue waters and beautiful vistas of the islands multiply the value of the region. The dragons really are guarding a magical treasure!