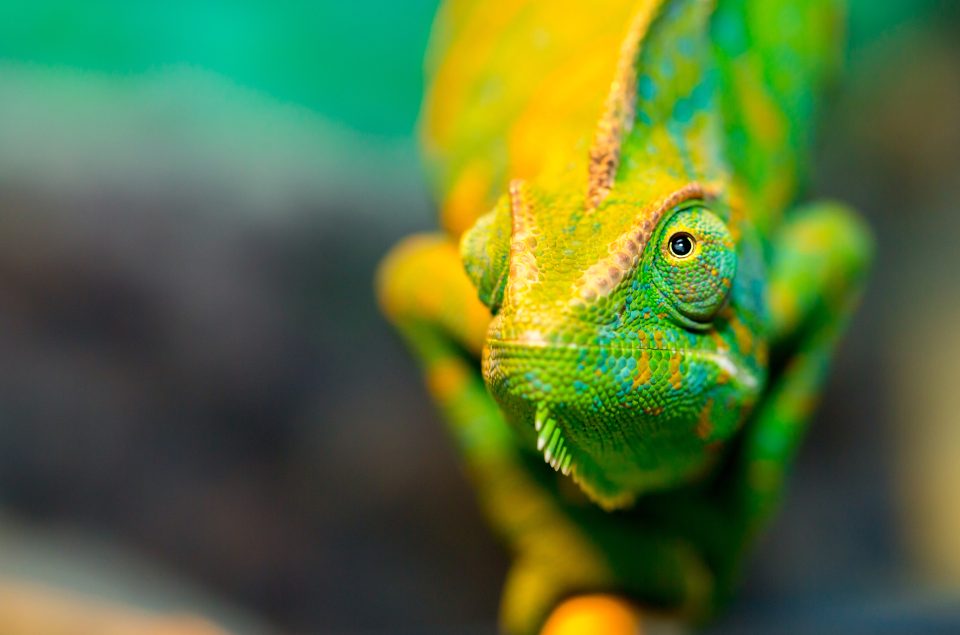 Are Chameleons Reptiles? Yes, Here's Why

Lizards, snakes, and turtles have been kept as pets by humans for thousands of years. What do they all have in common? They’re reptiles! This group of organisms has been distributed on planet earth for over 300 million years. Their evolution has produced a stunning array of diversity spread across many ecosystems. Today, let’s take a look at one of the most interesting members of this class and answer the question: are chameleons reptiles? 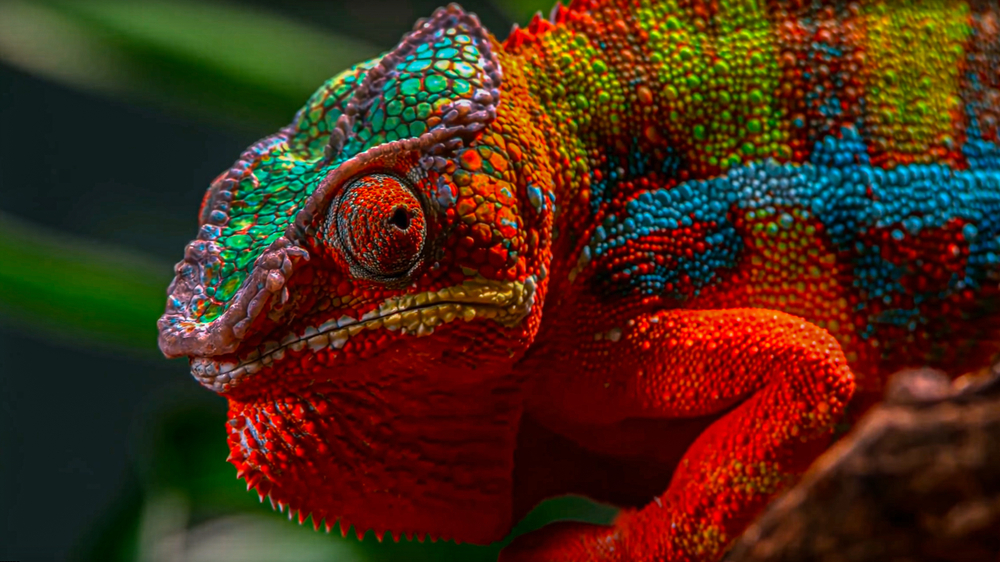 What Is a Reptile?

It’s not the skin of reptiles that make them unique, but rather, it’s what covers their skin. All reptiles have scales, bony plates, or a combination of both. In some cases, these scales are rather small. Take snakes, for example. Their bodies are covered in hundreds or thousands of small, hard scales. From a distance, this can simply appear to be skin. On the other end of the spectrum, crocodiles have large, hard plates covering their bodies. In both instances, these evolved for protection.

Reptiles are ectothermic, like amphibians. This firstly means that they do not produce their own heat. Secondly, they do not maintain a constant body temperature. This is why reptiles, like lizards and snakes, sun themselves: to warm up their internal body temperature. Reptiles are (somewhat) unique in the animal kingdom in that also do not possess much of any external temperature regulation, either. They lack fur or feathers to keep them warm in colder temperatures, and they lack sweat glands to cool them off in warmer temperatures.

Only two reptiles – boas and pythons – give birth to live young. Every other reptile simply lays eggs into a nest and then leaves the eventual young to fend for themselves. Interestingly, the temperature at which eggs mature is a determining factor in the sex of reptile offspring. This is largely due to the hormone aromatase. Essentially, temperature fluctuations affect the levels of aromatase in developing reptiles. This in turn affects levels of sex-determining hormones. 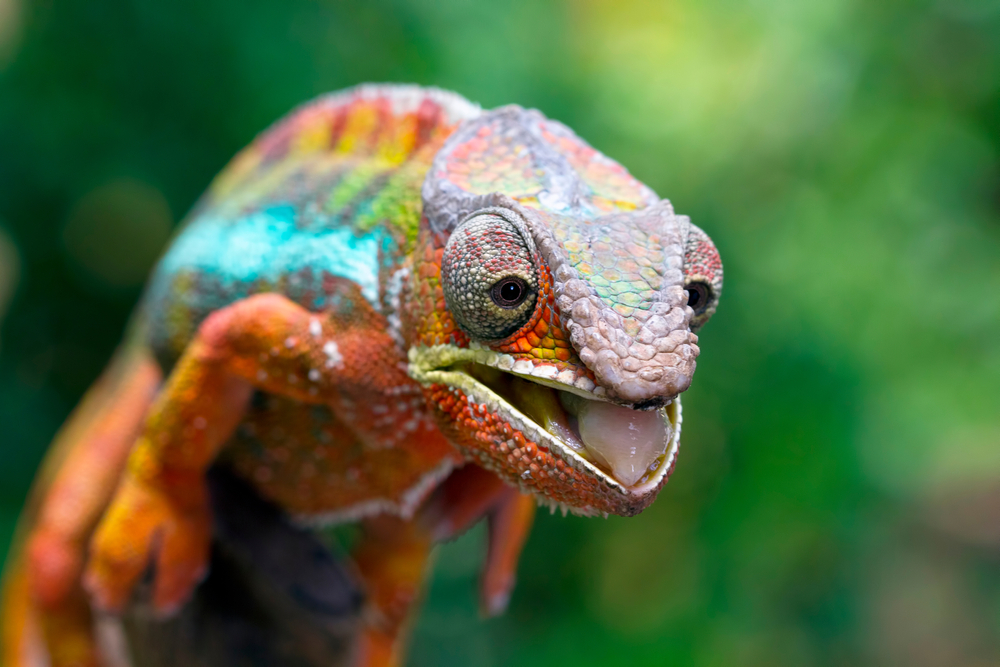 What Is a Chameleon?

Now that we understand what reptiles are generally, what exactly is a chameleon? In terms of their taxonomy, chameleons fall into the family chamaeleonidae. There are over 200 described species spread across several different genera.

One of the most distinct parts of a chameleon’s morphology is their color-changing ability, but we’ll get to that later. Relatively speaking, the range of different sizes present in these reptiles is rather large. One of the smallest chameleons, B. micra, grows to about one inch in length. On the other hand, F. oustaleti chameleons can grow to over two feet in length.

Generally speaking, chameleons are native to Sub-Saharan Africa and Madagascar. Some species are native to many other regions in the world including India, the Middle East, and Southern Europe.

Chameleons are also found in other, non-native locations. Jackson chameleons have been introduced in Hawaii and are considered an invasive species. In Florida, a very similar problem occurs.

Most species of chameleon are considered arboreal – they live in trees. Usually, they are found on the trunks and lower branches of trees in tropical and mountain forests. The Namaqua chameleon breaks this rule. It is entirely ground-dwelling and lives in the deserts of western Africa.

Chameleons lay their eggs in shallow holes they dig into the ground. Depending on the species, chameleons will lay anywhere from 10-200 eggs. The gestation period varies just as widely, as well: 4-12 months. Most chameleon species are insectivorous: they only eat bugs. Interestingly, larger species. such as veiled chameleons, also include birds in their regular diet. In the wild, chameleons generally live 2-3 years. In captivity, they can live almost 4 times as long, sometimes up to 14 years. 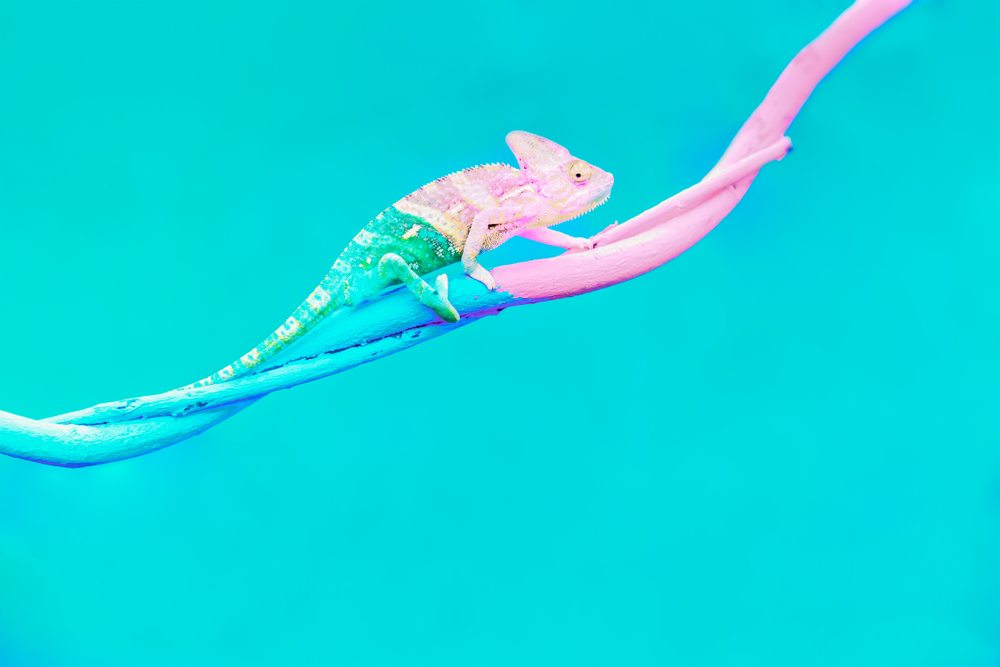 The behavior that chameleons are famous for – changing color – has long been a topic of study among ecologists. The purpose of the color-changing ability is two-fold. First, it allows chameleons to thermoregulate. When they need to absorb more heat, and therefore light, they can turn darker colors. When they need to cool off, they can change to a lighter color. Secondly, this behavior is used for signaling. For example, male chameleons can turn specific colors to signal aggression. Female chameleons can use the ability to signal their willingness to mate.

The physiology of this behavior comes down to sacs of pigment deep in the chameleon’s skin. According to Dr. Mary Bates, a Ph.D. ecologist, the phenomenon is regulated by specialized cells. The outermost layer of the skin is transparent. “Beneath this are several more layers of skin that contain specialized cells called chromatophores.” These are pigment filled sacs, and they are normally not exposed. But, this changes when a chameleon experiences a change in temperature or mood. “Its nervous system tells specific chromatophores to expand or contract.” It is this expansion and contraction that cause the stunning array of colors we observe.

Chameleons are an endangered family. For the most part, this is due to habit loss. Over the last 50 years, in Tanzania, 60% of the chameleon habitat has been lost. This is largely due to the expansion of human habitat. This problem isn’t specific to chameleons, either. Globally, reptile numbers are in decline. This is in large part due to global climate change. Lizards are unable to regulate their own body temperature. As such, they rely on very specific temperature gradients in their environment. Thus, even small changes can be deadly.