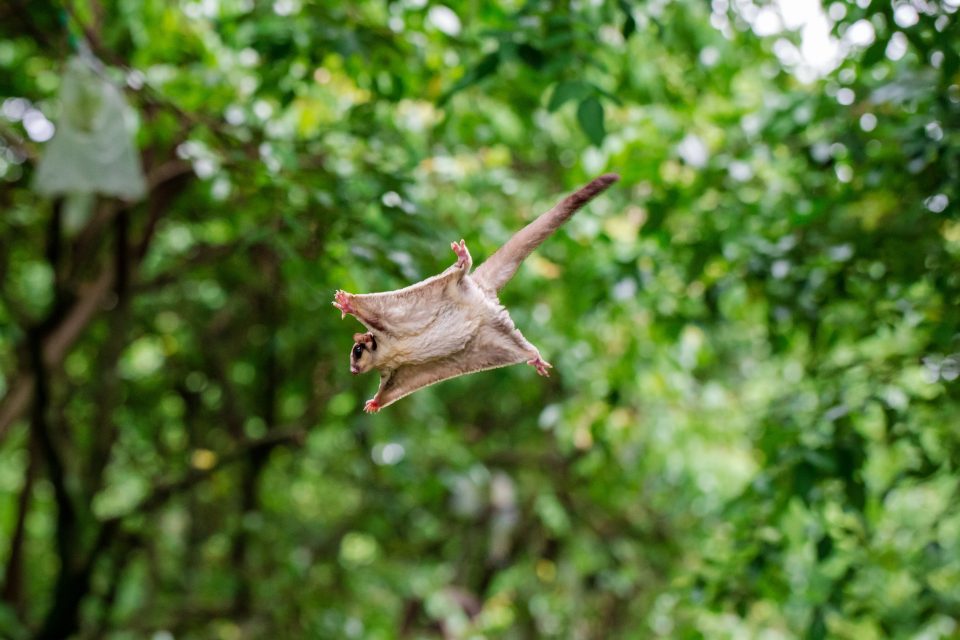 Do Flying Squirrels Exist? Not Exactly.

Common names can often be misleading. The electric eel isn’t actually an eel. The red panda is more closely related to a raccoon than a panda. Surprisingly, the killer whale is actually a porpoise, meaning it is closer to a dolphin than a true whale. The so-called flying squirrel is an especially misleading name. While they can move accurately through the air, they don’t exactly fly.

What Does It Take to Fly?

All flying things have an airfoil in some way or another. A wing on an airplane is a textbook example of an airfoil. The special shape of these airfoils, whether it be the wings on a plane, the blades on a helicopter, or the wings of a bird, all produce a force called lift. This lift is caused by the airfoil creating a low-pressure system above the wing and relatively higher pressure below it. The object is pushed up towards the low-pressure area. Don’t worry, understanding the physics here isn’t that important. 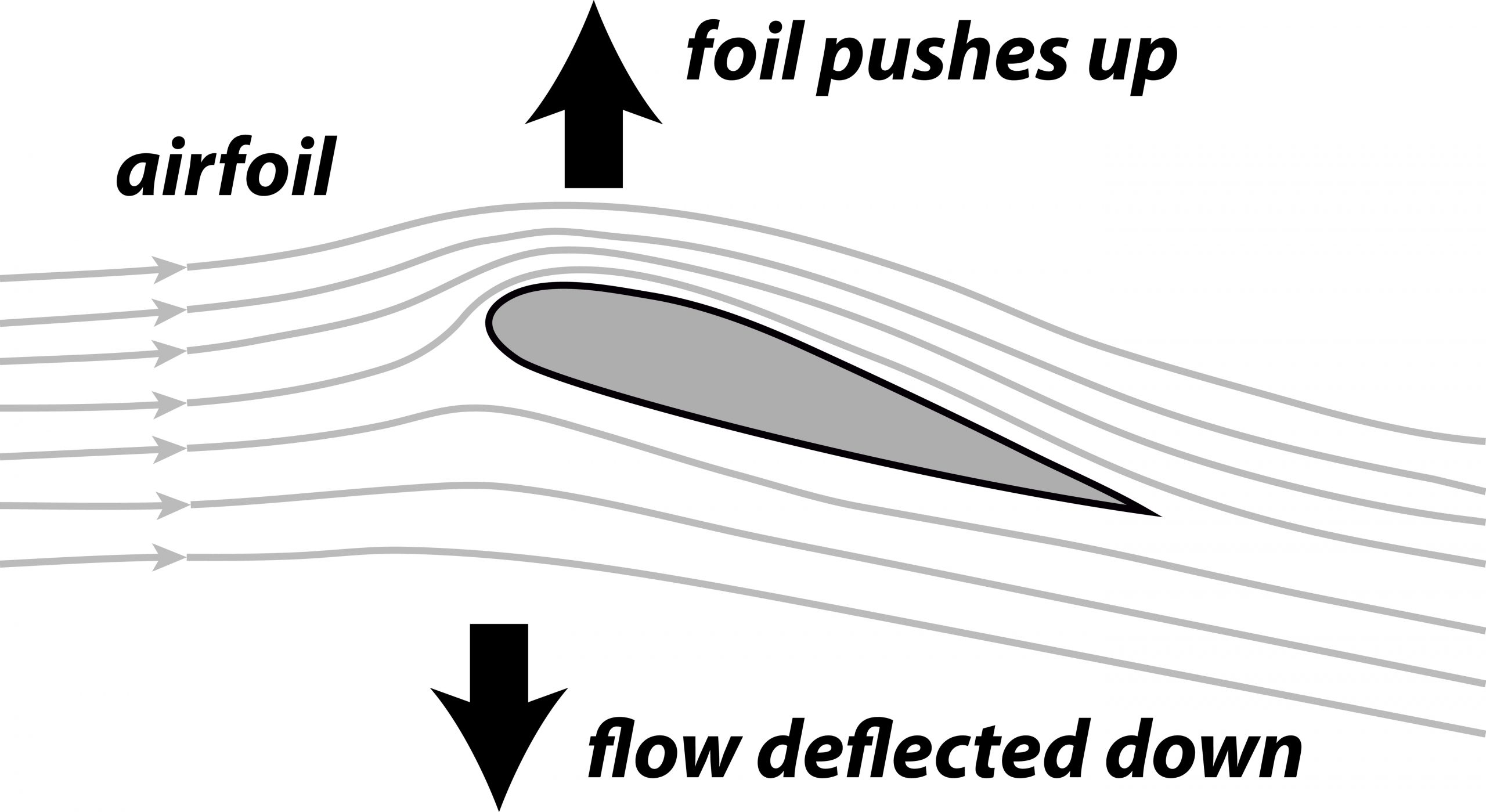 A basic diagram of the profile of an airfoil.

In order to actually fly, flyers need another force in addition to lift. If you dropped an airplane from 30,000 feet in the air, it would immediately begin falling if the propellers weren’t spinning. These propellers produce that other necessary force, which is thrust. Instead of spinning propellers, animals produce thrust by flapping their wings. The combined forces of thrust and lift allow birds, insects, and bats to fly.

However, not all wing shapes are created equal. To be efficient, a wing needs a high aspect ratio. An aspect ratio is the length of the wing from side to side compared to the width of the wing from front to back. Albatross, the birds with the longest wings, have one of the highest aspect ratios of all creatures since their wings are incredibly wide from side to side and quite narrow from front to back. The narrow wing tip helps flyers like the albatross use less energy when flapping. 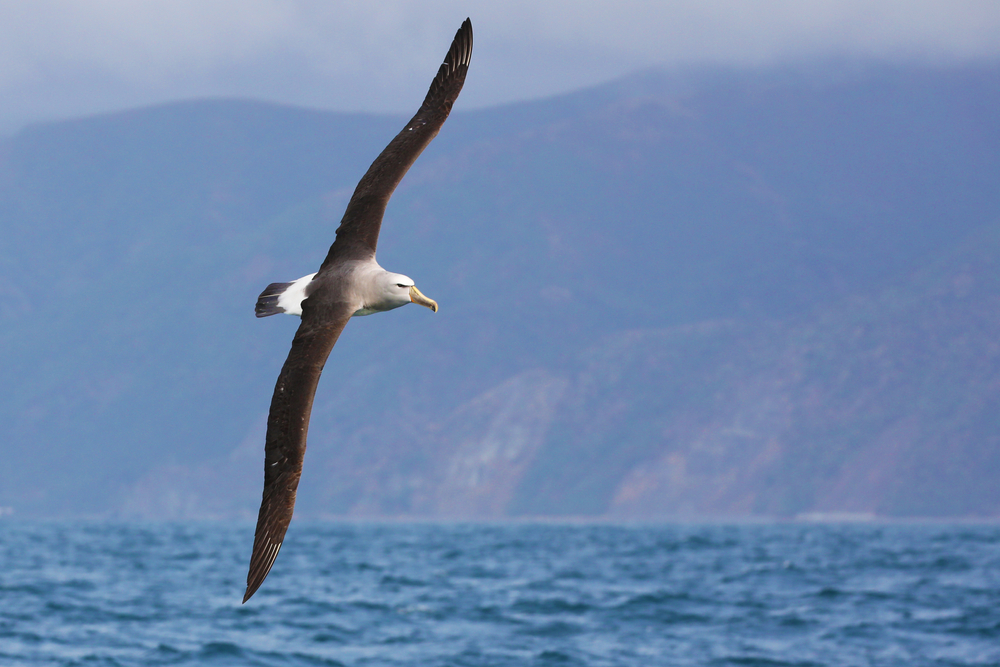 This albatross has long, narrow wings, which gives it a high aspect ratio.

Chickens, in contrast, have relatively short wings from side to side, but relatively long wings from front to back. This wing shape allows the chicken to produce a lot of thrust when flapping its wings, meaning chickens can quickly burst away from danger. But their wing shape comes at a cost; moving chunky chicken wings takes a lot of energy. This is partly why chickens, turkeys, and other game birds don’t fly far distances. 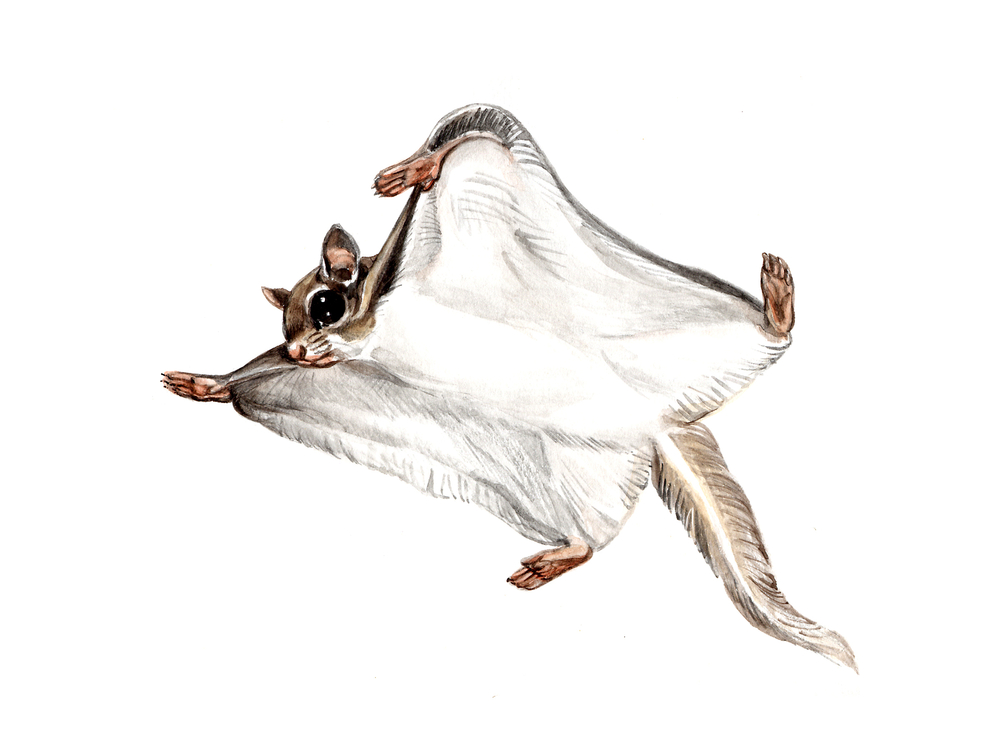 The flying squirrel wings are long from front to back and short from side to side, giving them a low aspect ratio.

An Overview of Gliding

While it is challenging to flap the cardboard, the force of the air pushing up on the cardboard is exactly what the flying squirrels take advantage of. When they jump from high up in a tree, the flying squirrel extends its arms and legs, which have a wing-like membrane between them. This membrane catches air resistance, which slows the squirrel’s fall to make it a glide. The squirrels never actually flap. Instead, they adjust their ‘wings’ to catch different amounts of air resistance on each side of their body. This way, they can move left or right, or even make a complete 180-degree turn.

Since the squirrels don’t add thrust to their lift, they aren’t technically flying squirrels. They are gliding squirrels. As a result, they never end up higher above the ground when they land from gliding as opposed to when they took off. They always lose some altitude. This also means that flying squirrels have a limit on how far they can ‘fly.’ When they jump from higher up, they can glide further. If they jump from ten feet above the ground, they won’t get very far. 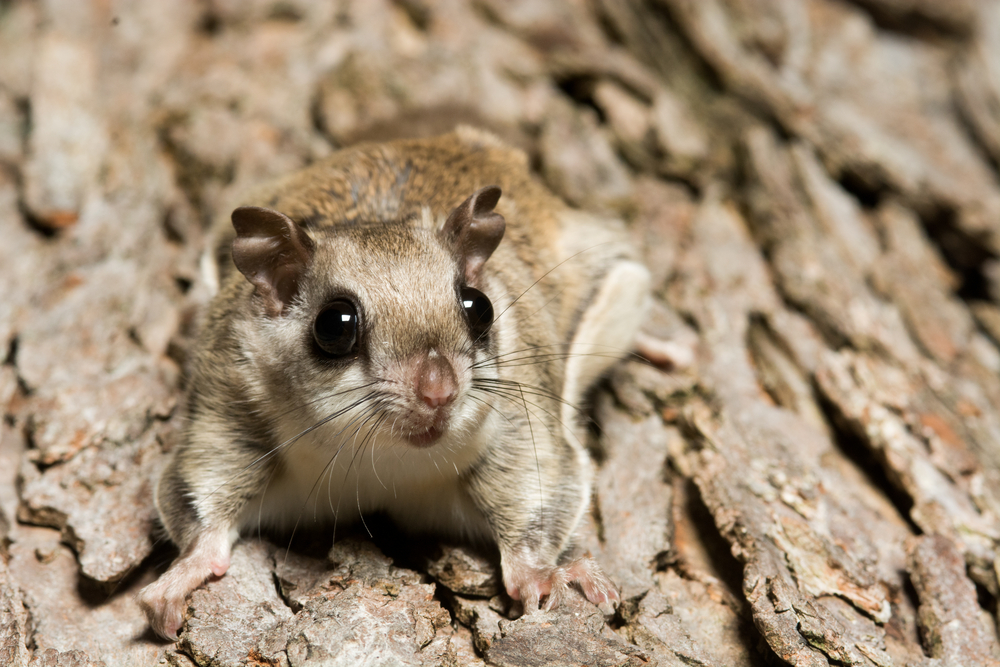 There are about fifty species of flying squirrels in the world. All but five live in the temperate and tropical regions of Asia. Three live in North America, and the other two live in northern Eurasia. The high density of gliding species in southern Asia is probably a result of the forest structure. Humans are even discovering and rediscovering new species of flying squirrels today!

Forests there have tall trees with open canopies. The higher up their take-off, the further flying squirrels can glide. Therefore, gliding is more evolutionary advantageous in habitats like the tall rainforest canopies of Asia than the open savannahs of Africa. 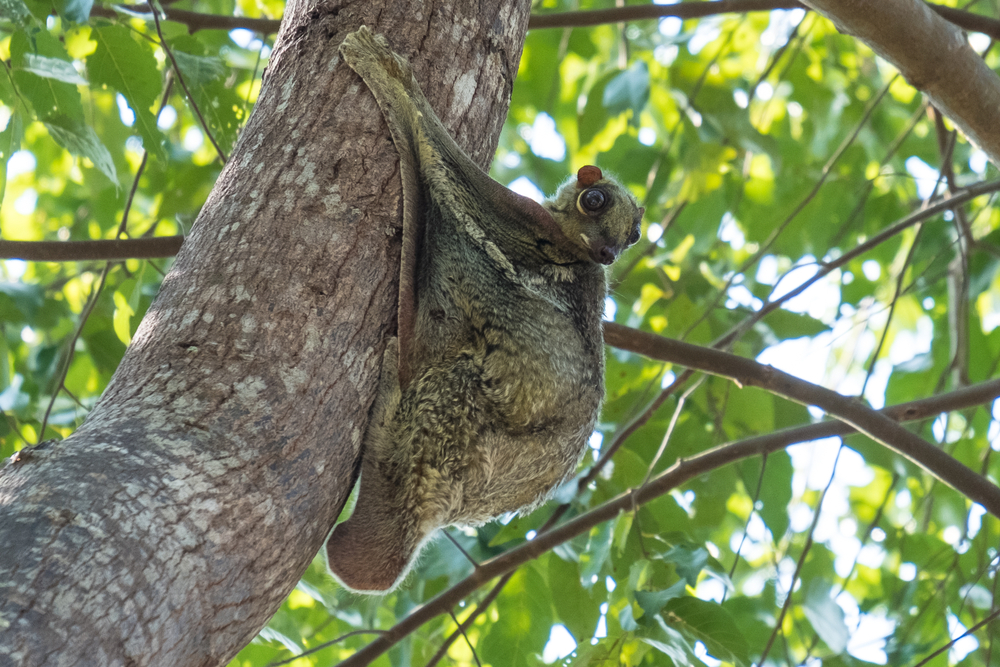 A flying lemur clings to a tree.

Are There Other Gliders

Unlike flying, which has only evolved in insects, bats, birds, and dinosaurs, gliding is widespread in the animal kingdom. It has evolved time and time again, proving the evolutionary advantage of gliding for all sorts of species.

Along with the fifty species of flying squirrels, multiple groups of mammals can glide. First are the colugos, also known as flying lemurs. The two species of colugos are most closely related to primates. They are larger than flying squirrels and have more advanced gliding wings.

There are also scaly-tailed squirrels. Unrelated to flying squirrels, eleven species of these animals soar through the forests of central Africa. Lastly, there are the 11 species of gliding possums of Australia and New Guinea. One of these species, the yellow-bellied glider, can glide nearly 400 feet. 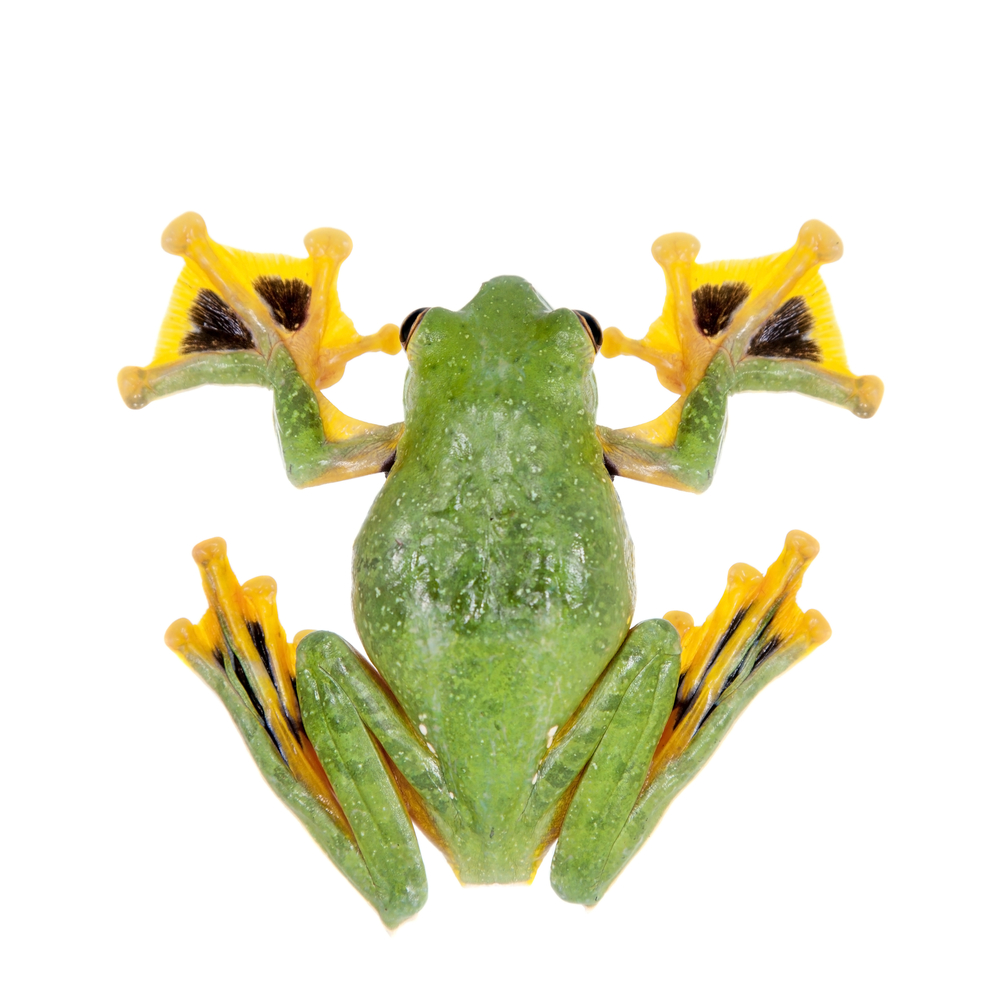 A flying frog shows off its webbed feet.

Reptiles and amphibians have also figured out how to glide. This small flying lizard can glide nearly 200 feet and is also native to Southeast Asia. In fact, there are dozens of species of gliding lizards! A group of frogs that has large, webbed feet can also glide, using their webbed feet to catch air.

Even snakes have figured out how to glide! Unlike any other known glider, these snakes’ ability to slither through the air actually increases the distance they can glide.

Gliding is actually common in the spider world as well. Spiders create long strands of web, which catch air and help them glide long distances. This behavior is called ballooning. Ballooning is probably how spiders colonized isolated islands like Hawaii and New Zealand. If you pay attention, you will likely see stands of silk floating through the air while you are outside. These are probably airborne spiders floating to new homes. 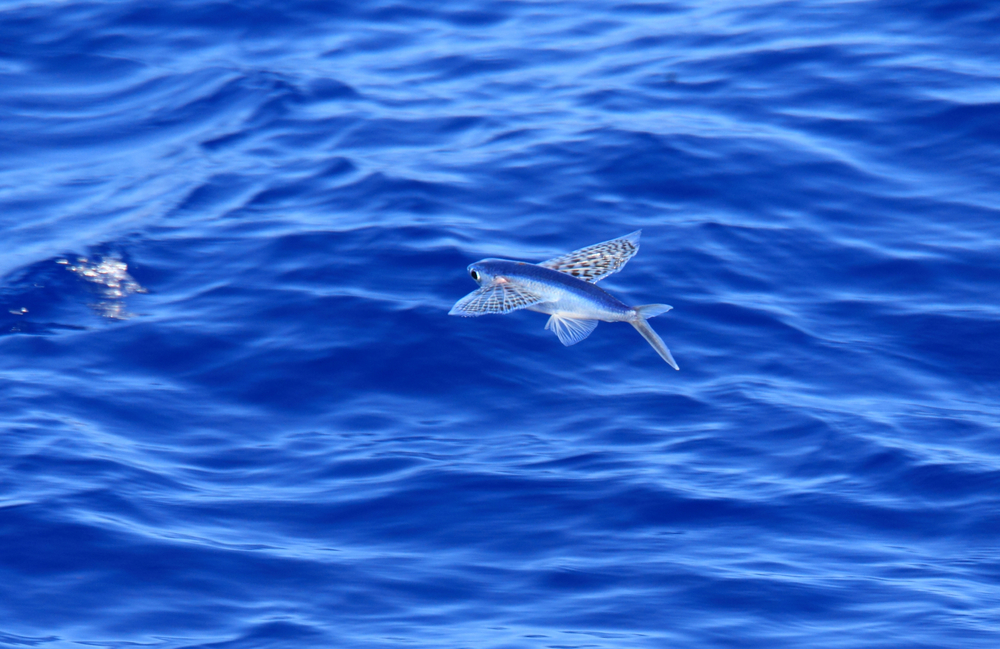 A flying fish glides over the ocean.

Lastly, over fifty species of fish can also glide through the air. They propel themselves out of water and use modified fins to catch the air and glide above the ocean. Gliding has independently evolved in insects, mammals, reptiles, fish, amphibians, and even mollusks (in the case of the flying squid). As you may have noticed, almost all of these animals’ names include the word flying. But really, like the ‘flying’ squirrel, they are all simply gliders.

Our Backyard Squirrels Glide, Too

While they don’t truly fly, flying squirrels are nonetheless fascinating forest creatures. They are not too different from our common backyard squirrels, which are also impressive jumpers in their own right. In fact, regular squirrels use their bodies similarly to flying squirrels to jump further and land safer. If you’ve got 20 more minutes to dedicate to your squirrel knowledge, this video is certainly a comic, valuable watch. The engineer describes how our backyard squirrels maneuver so well in the air, much like their gliding cousins. Next time you see a squirrel jump, pay attention to the calculated way in which it moves its body to fly through the air!