What Does the Bottom of the Ocean Look Like? • Earthpedia % Earth.com

What Does the Bottom of the Ocean Look Like?

The bottom of the ocean is filled with rare and unique species seen nowhere else. Many of these look otherworldly, and some of the species that live here are still completely unknown to science. However, despite knowing so little, what we have learned, seen, and photographed is incredible. 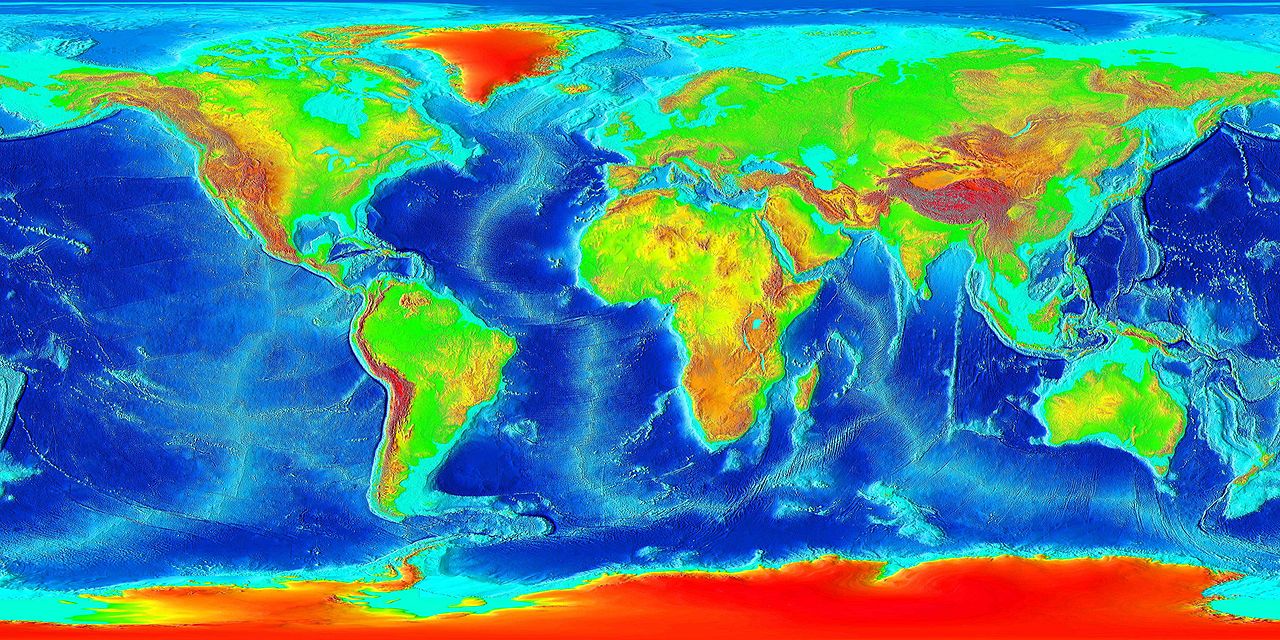 The ocean floor is huge and covers 360 million square kilometers of the earth’s surface. Though we have detailed topographical maps of the rest of the earth’s surface, this is harder to do for the ocean. The satellite radar techniques used to chart the topography on land don’t work well through water. This leaves us with only low-resolution maps of the ocean floor. Each pixel of these maps represents a 5km by 5km square. This only gives a vague idea of the geology and geography of our oceans. However, more advanced sonar methods provide a 10 fold improvement or greater!

Mapping the Ocean Floor with Sonar

The ocean poses particular technical challenges, which is why so little is known. The process of creating high-resolution maps of the ocean floor is time-consuming and expensive. In order to map the ocean floor, specially equipped ships move directly over the area. This process is slow and difficult. Therefore, only 10-15% of the ocean floor has been mapped directly with sonar.

Interestingly, some of the highest quality broad seafloor maps we have came from the search for the missing airplane, MH370, in March of 2014. The plane was believed to have crashed into the Indian Ocean along the path of the last satellite with which it communicated. In hopes of finding the aircraft, 710,000 square kilometers of the ocean floor were mapped in detail. These maps have 15 times more detail than previous maps of the area. This included maps of regions of the seafloor over 40 million years old. This area is covered with 300 meters of sediment. This would be enough muck to bury the entire Eiffel Tower. This search also revealed details of the Broken Ridge and Diamantina Trench. These features are a result of the tectonic shifts that occurred 40 million years ago.

The type of information collected during this search is very useful to oceanographers and geologists. The floor of the ocean contains many hints to our planets tectonic history. The ocean floor also has significant impacts on weather patterns. Understanding the details of the seafloor’s topography could help predict weather patterns. Researchers at the University of Delaware have developed “fingerprint algorithms” that use high-resolution maps of the ocean floor to analyzed past storms in order to improve predictions.

The ocean contains amazing mountain ranges, volcanoes, incredibly deep trenches, and strange creatures. However, the majority of the ocean floor is far more boring. The abyssal plains cover the majority of the ocean. These vast, flat expanses cover over half of the Earth’s surface. They are mostly filled with featureless sediment stretching for immeasurable distances. 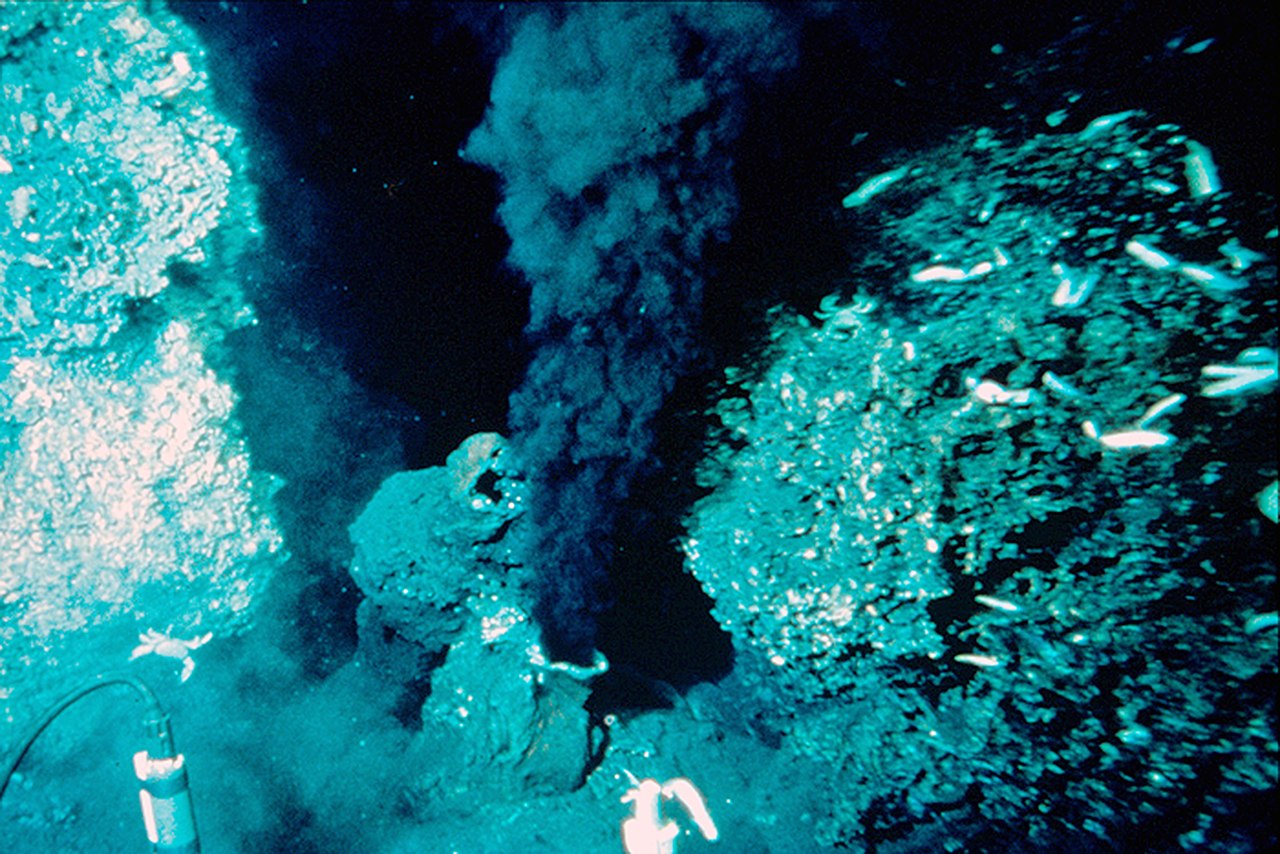 This “black smoker” is a hydrothermal vent that supports life in the deep sea.

Occasionally, the carcass of a whale or a hydrothermal vent interrupts the vast emptiness of the abyssal plains. In those cases, isolated ecosystems thrive off of the rare pocket of energy. This expanse starts after the continental shelf, where the ocean drops off to an average depth of 3.7 km.

Enormous trenches and mountain ranges also interrupt the vast abyssal plains. The trenches are the most remote places on the planet. The Challenger Deep is the deepest point in the ocean, reaching 10.9 km (6.8 miles) below the surface. This is so deep that if Mt. Everest began at the bottom of the Challenger Deep, its peak would be in complete darkness, still 2 km (1.3 miles) below the ocean surface.

“It was yellowish-white and didn’t look quite like sediments we had seen before. It’s diatomaceous ooze, the skeletons of diatoms. Because calcareous ooze is shells of small critters in the sea, and calcium-based, it dissolves at great depths. So we were left with bottom sediment inert to pressure — just little balls of glass, if you look at them microscopically. To me, it was like being in a big bowl of milk.”

Litter in the Depths

Though the bottom of the ocean sounds like an untouched pristine environment, humans have left their marks here too. Like the rest of the ocean, human trash litters the remote ocean floor. Shopping bags, beer cans, microplastics, and even missiles are found in these newly explored areas. Without knowing much about these ecosystems, it is hard to know what the impacts of this trash are. Some seem to provide new habitats for some species. However, these may disturb the ecosystem in irreversible ways long before we understand these systems.

Decreasing human trash, particularly plastics, is the most important step we can take to protect these and many other ecosystems.