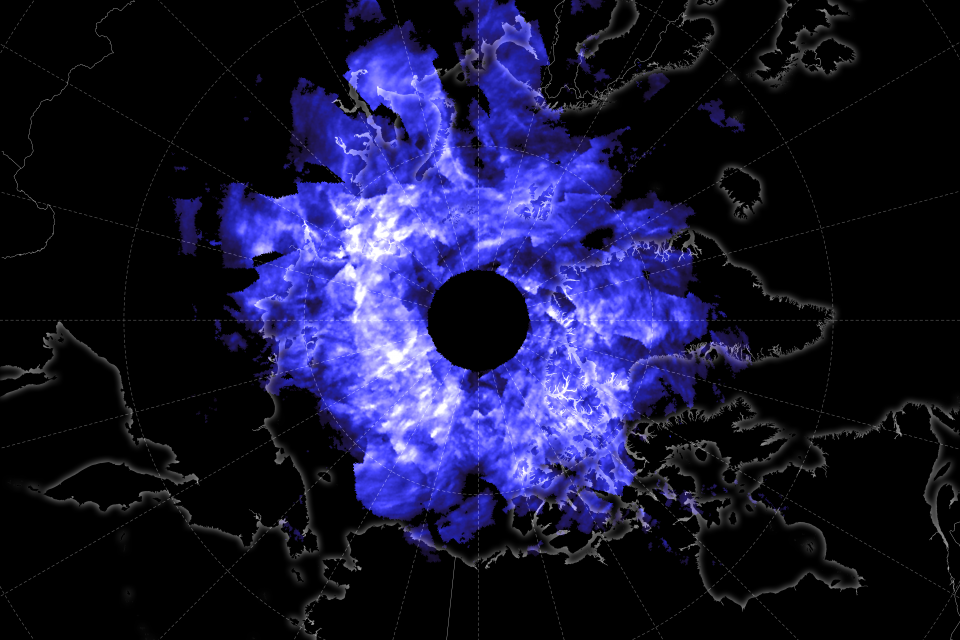 These “night shining” clouds appear just after sundown, but float so high in the atmosphere that they are still lit by the sun when it is no longer visible. Night shining clouds over the North Pole

This composite image is centered on the North Pole and is based on data obtained by NASA’s Aeronomy of Ice in the Mesosphere (AIM) spacecraft.

The North Pole, also known as the Geographic North Pole or Terrestrial North Pole, is (subject to the caveats explained below) defined as the point in the Northern Hemisphere where the Earth’s axis of rotation meets its surface.
The North Pole is the northernmost point on the Earth, lying diametrically opposite the South Pole. It defines geodetic latitude 90° North, as well as the direction of true north. At the North Pole all directions point south; all lines of longitude converge there, so its longitude can be defined as any degree value. Along tight latitude circles, counterclockwise is east and clockwise is west. The North Pole is at the center of the Northern Hemisphere. The nearest land is usually said to be Kaffeklubben Island, off the northern coast of Greenland about 700 km (430 mi) away, though some perhaps semi-permanent gravel banks lie slightly closer. The nearest permanently inhabited place is Alert in the Qikiqtaaluk Region, Nunavut, Canada, which is located 817 km (508 mi) from the Pole.