Trillions of cigarette butts are littered each year and it's killing plants • Earth.com 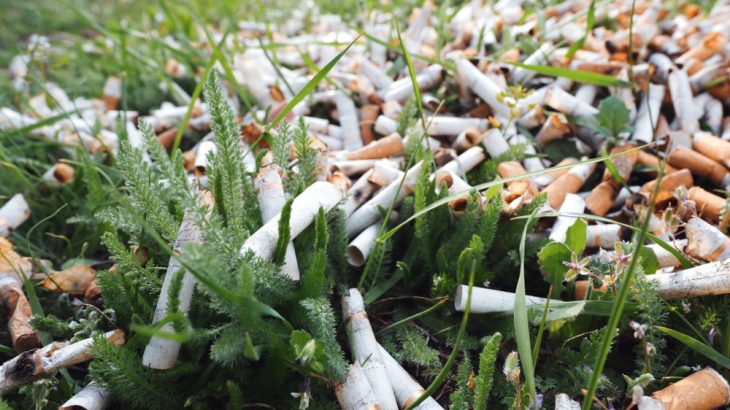 An estimated 4.5 trillion cigarette butts are littered around the world every year. They don’t biodegrade, they’re full of chemicals, and they’re killing a massive number of plants, according to a new study from Anglia Ruskin University.

“We found they had a detrimental effect on the germination success and shoot length of both grass and clover, and reduced the root weight of clover by over half,” said lead author Dr. Dannielle Green. “Ryegrass and white clover, the two species we tested, are important forage crops for livestock as well as being commonly found in urban green spaces. These plants support a wealth of biodiversity, even in city parks, and white clover is ecologically important for pollinators and nitrogen fixation.”

Cigarette butts, made of bioplastics, aren’t biodegradable. That means when they’re tossed on the ground, they sit there until they’re cleaned up or eventually covered with soil.

But the presence of cigarette butts in the soil can reduce successful germination – “birth” from seed to plant – of white clover by 27%, and the length of the plant’s stem by 28%, which negatively affects survival. For ryegrass, the germination success was cut by 10% and shoot length by 13%.

The effects were the same whether the cigarette butt was from a smoked cigarette or an unused one, researchers said. That indicates the problem isn’t the chemicals in tobacco, but the butt itself. The filters are made out of bioplastics.

“Although further work is needed, we believe it is the chemical composition of the filter that is causing the damage to plants,” co-author Dr. Bas Boots said in a press release. “Most are made from cellulose acetate fibres, and added chemicals which make the plastic more flexible, called plasticisers, may also be leaching out and adversely affecting the early stages of plant development.”

Cigarette butts clog the Gulf of Mexico and was one of the most-collected trash items during an Ocean Conservancy clean-up in 2017. Discarded, still-lit butts have sparked major wildfires.

“In some parks, particularly surrounding benches and bins, we found over 100 cigarette butts per square meter,” Green said. “Dropping cigarette butts seems to be a socially acceptable form of littering, and we need to raise awareness that the filters do not disappear and instead can cause serious damage to the environment.”

The study has been published in the journal Ecotoxicology and Environmental Safety.