Lift Off! The James Webb Telescope Is Headed to Space • Earth.com 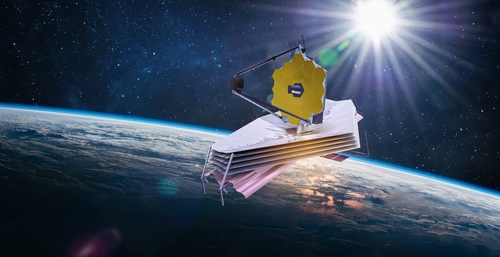 Lift Off! The James Webb Telescope Is Headed to Space

NASA’s James Webb Space Telescope has lifted off! It’s an exciting day for the space enthusiasts among us. And even if you aren’t as well versed in space exploration and discovery, the Webb Telescope has exciting potential that will impact all of us here on planet earth. News outlets have described the telescope’s journey as a quest “to the edge of time itself” and scientists eagerly anticipate new data about the birth of the universe as the telescope flies into action.

Today we’re going to take a look at the details of the James Webb Telescope, what scientists anticipate this technology can accomplish, and what it might mean for us back here on Earth’s surface as we navigate challenging times on both global and local scales.

For as vast and expansive as our home galaxy is, our connections to each other and the questions that inspire these pursuits define our species and illuminate critical information and survival – on this planet and beyond.

The James Webb Telescope (JWST) launched on Christmas morning – December 25, 2021. At the same time when many children around the globe rushed to see what Christmas presents had landed from Santa in the night, the JWST lifted off from the Ariane 5. The launchpad is part of Europe’s spaceport located in Kourou, French Guiana. The rocket ignited and sent the telescope rocketing out of our atmosphere and into space. “We are expecting to see the light from the first galaxies that formed some 100 [million], 200 million years after the Big Bang,” NASA administrator Bill Nelson said in a recent briefing.

The Big Picture Behind A Powerful Telescope

NASA developed the JWST in partnership with the Canadian Space Agency and the European Space Agency (ESA). The intention behind the JWST is that it will succeed and expand the Hubble Space Telescope, which has enchanted scientists and children alike for the last 30 years. The Hubble telescope succeeded in determining the age of our universe (13.8 billion years). It has helped scientists to discover two moons around pluto. The images from Hubble contributed to calculations on how fast the universe is expanding. It illuminated that almost every galaxy we have so far discovered has a black hole, anchoring its center. The JWST is the next step in these significant leaps in our cosmic understanding.

Even though JWST is intended to supersede Hubble, it is actually only half the size of the older space telescope. However, Webb’s primary mirror is over 6 times larger than Hubble’s. The mirror is 21 ft in diameter. Made of gold-coated beryllium reflector, it has 18 hexagonal mirrors. Scientists have designed the Webb Telescope in this way to provide improved infrared resolution of images and will also empower an exciting amount of new investigations in the fields of astrophysics, astronomy, and cosmology.

A critical design element of the telescope is its sunshield. The sunshield is important because the mirrors must be cold and out of the sun’s heat. It is designed to always block the mirrors from the sun, moon, and earth and will passively radiate the telescope’s heat into space. The shield is made up of 5 layers. Each successive layer is cooler than the last. The vacuum created between each layer functions as insulation – which disrupts the conduction of heat better than a single, large layer. Overall, the shield will protect the telescope so that the sensitive scientific instruments will be better able to detect infrared light from very distant and faint objects.

The Integrated Science Instrument Module (ISIM) is the telescope’s framework. It incorporates four scientific instruments as well as a guide camera. The four instruments are: the NIRCam (Near InfraRed Camera) which is an infrared imager; NIRSpec (Near InfraRed Spectrograph) will also perform spectroscopy over the same wavelength range; MIRI (Mid-InfraRed Instrument) will measure the mid-to-long-infrared wavelength range from 5 to 27 μm; and FGS/NIRISS (Fine Guidance Sensor and Near-Infrared Imager and Slitless Spectrograph) – which will stabilize the light of sight of the telescope’s observatory.

There is also a “spacecraft bus” – a term which, if you grew up in the 1990s and early 2000s, may remind you of Mrs. Frizzle and her magic school bus, but is actually in reference to the primary support component of the telescope which will provide computing, communication, electrical power, propulsion and structural parts to the telescope as a whole.

These scientific instruments and frameworks add up into an incredible piece of space technology. This technology enables ongoing and yet-to-be-determined investigations and explorations that will include some very far-reaching elements of our universe. But what is it that we’re hoping to find in the far reaches of space, exactly? Aliens?

What Scientists Hope To Find

When Homo sapiens look up into the sky, we tend to ask big questions. What we seek up there in the stars can be an ineffable quandary – but it can also be a scientific hypothesis. Telescopes have already empowered us to learn so much about our solar system. From the Aztec star charts, to 1600’s Netherlands, to Galileo, and up to today, these discoveries have shaped our species and planted seeds of cosmic curiosity.

With the James Webb space telescope launch, there is a continued legacy of hopes, dreams, hypotheses, and explorations that become possible to undertake for us as a species. There are big questions to pursue – as has been true in every decade of our evolution.

Examples specific to this telescope launch include the formation of first galaxies and the potential identification of habitable exoplanets and their atmospheres. We might be able to glimpse the first stars to light up the universe.  The telescope will be able to observe black holes and quasars with unmatched sensitivity and detail – possibly revealing the mysteries of their complex structures.

According to Nasa administrator Bill Nelson, JWST has the potential to “open up the secrets of the universe”.  It can sound like a sci-fi novel to the uninitiated – but it is real life, in the real world, floating in a real universe and fascinating mystery and astronomy principles. The first images from the Webb telescope are expected to arrive in summer 2022.

Who Is James Webb?

Obviously, the stakes are quite high as is anticipation. While we wait for the images of the telescope to come in, maybe we can take the time to ask: who is James Webb? And why did NASA and global collaborators choose to name this incredible telescope after him?

Webb ran the fledgling space agency, NASA, from 1961 – 1968 and is most linked to the Apollo space program of that era. To many, he is a government figure whose work balanced human curiosity and space flight with science. According to NASA’s online site, Webb “did more for science than perhaps any other government official and that it is only fitting that the Next Generation Space Telescope would be named after him”. There has been controversy over Webb’s legacy and potential involvement in the “lavender scare” that took place in NASA’s history – an assault on LGBTQ workers of which there is a continued need for reconciliation. NASA declined to change the name.

When NASA administrator Sean O’Keefe announced the name of JWST, he explained that “[James Webb] took our nation on its first voyages of exploration, turning our imagination into reality.”

Space Science And Travel In The Time Of Coronavirus

It is a striking moment in history. A telescope that can reach the ends of time, named for a man whose life work was dedicated to human curiosity and potential, launched on Christmas day in the midst of a harrowing global pandemic. 2021 was a year characterized by misinformation, ghastly politics, and crumbling social structures that we all depend upon – and also, apparently, hope and optimism via telescope. It’s a lot to take in.

The questions surrounding how we use our resources and who gets to decide is an emotional debate. We do not all agree and acute crisis surrounds all but the luckiest of our species. Billionaire business owners launch themselves into space while their workers contract a deadly virus from working in warehouses for wages that do not cover even the most basic living expenses. Where do space travel and space science fit into all of this? Especially when a project like JWST comes at a high cost, of course. The commissioning cost for the telescope swoops in at a whopping 8.8 billion dollars – so far. Our dominant culture is coming around the fact that our resources are not infinite. Our planet has limitations that will demand our adherence, one way or another.

In Conclusion, A Big Beginning

The Webb Telescope isn’t some impulsive whimsey of spending and space colonization. This technology has been in the works since the 1980s. This telescope and observatory have the potential to revolutionize our understanding of the universe – and better inform our understanding of how our planet and our species fit into that cosmic web.

And boy, do we ever need some perspective. As the omicron variant rages through our communities we will all answer these philosophical and tangible debates according to our lived experiences and value systems. Maybe the James Webb Space Telescope, in addition to illuminating certain astronomy and cosmology theories, might also apply to our mundane, everyday lives. What does it mean to turn our imaginations into reality? How might our own planet look if we were able to cultivate connective relationships and a shared curiosity?