Savannah Cats vs. Servals: They're Not the Same! • Earth.com 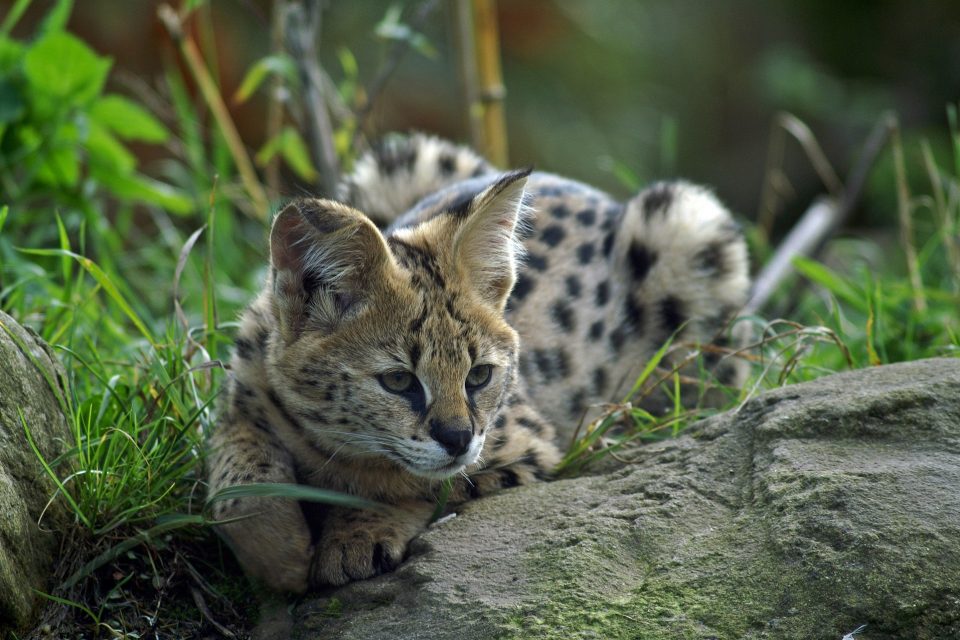 Savannah Cats vs. Servals: They're Not the Same!

Savannah cats are all the rage in the world of cat breeds and pet fads. And perhaps less popularized on Instagram but innumerably more precious to thriving ecosystems are servals. Both are incredibly beautiful animals. And the truth of the matter is that while they are distinctly different, they are also related. A serval is a wild animal, native to Africa. On the other hand, a savannah cat is a hybrid of a wild serval and a domestic cat – a cat breed.

Ever wonder what is the difference between savannah cats and servals?

Both are highly intelligent and have similar colors and patterns, but they are generations removed.

Crosses between a small wild cat and domestic breeds are not novel and are bought and bred as a valuable commodity. In fact, Bengals (a cross between a domestic cat and an Asian leopard cat) rank as The International Cat Association’s (TICA) top breed. The opportunity of having a pet that looks like a fierce wild cat but has the temperament of a sweet house kitty is quite alluring to many people’s socialized conceptions of the ‘exotic” and unique. But we have to ask ourselves – what are the distinguishing elements between wild and domestic? What do we really want from the animals in our homes? And how do the stories around these wild and domestic animals reflect our own history?

Here, we’ll look at the key differences and similarities between savannah cats and their wild cousins, starting with servals.

Slender, small, and lanky, servals (serval Leptailurus serval) stand out as feline beauties even though their coats keep them camouflaged on the African savannah and tall grasses. Servals are the ultimate pouncer, powered by their long legs. After a couple of derivations through Portuguese and French, their name means “the wolf that hunts the stag.”

Servals have the biggest ears and longest legs in proportion to their bodies of any species in the cat family (Felidae).

Fun Fact: If our ears were in the same proportions as this African wild cat’s ears, they would be as big as a dinner plate!

With a beautiful tawny coat, decorated with black spots and stripes, it comes as no surprise that they became so popular as a tourist attraction and within our collective imaginations. Yellow eyes are emphasized by a dark line streaking from the ears down to the nose, similar to a cheetah. Their have long necks and gigantic ears both look charming and help them on the prowl. Long legs and a slender body are another good identifying factor. Finally, they have a beautiful yellow tail with several black rings. This coloration is often compared to “black smoke.”

A medium-sized cat, servals weigh between 18-40 lbs. Their shoulders stand about two feet high, and they are about three feet long. Additionally, females tend to be smaller and more slender than males. Within the discipline of biology, we call this occurrence sexual dimorphism.

Native to the African continent, servals are more commonly found in sub-Saharan countries. Except in the Sahara, the rainforest, and southern Africa, these creatures are widely distributed throughout parts of Africa. They are an important member of the vast landscape of the world’s second-largest landmass. While you won’t find wild servals in the region of South Africa, their habitats do stretch all the way out to east Africa.

Home on the Grassy Range

While servals are found in 34 different countries, they have their favorite habitats. These wild cats love the grass – especially the grassed areas of the river and surrounding areas. Think savannas, reed beds, high-altitude moorlands, wetlands, and bamboo thickets. These ecosystems are distinct with long savannah grasses and reeds – all playing a part in the serval survival and life cycle. Servals don’t just enjoy the riparian plants… These cats love playing in the water! Additionally, if there are water and prey available, servals have even adapted well to agricultural land – a growing factor as human development spreads across less developed countries on the continent that will surely have marked impacts.

All Felidae family members are carnivorous and the serval is no different. Its carnivore diet is primarily small rodents, though it will also eat birds, amphibians, reptiles, and other small mammal invertebrates.

The serval’s distinctly long legs and large ears are key to its hunting strategy. These traits have been passed down from many a serval ancestor. These cats are most active during crepuscular hours (dawn and dusk). They will listen and wait for prey before subsequently going for the dramatic pounce. And dramatic it is! Serval can leap 9 feet into the air to snatch a bird. Long, flexible toes allow them to swiftly hook a frog out from the reeds.

Quite the solitary animals, these African serval cats will rarely be seen in groups. They will mark their territories with scents and scratches, and they mostly give each other space. Male and female home ranges will overlap, and while they will come together to breed, they soon go their separate ways. The female will usually have 2-3 savannah kittens, and she acts as the sole care provider for the young. She’s a good mother too! In fact, female serval hunting success increases while she has cubs, perhaps because she must be on the hunt more often to feed the hungry mouths. Their gestation period is 68-74 days long. Their lifespan average is 11 years in the wild and up to 22 years in captivity.

A Note On Exotic Pets

In most places, it is illegal to keep exotic cats as pets. Reporting and protecting those individual cats living as exotic pets is important – in both ending animal abuse as well as ensuring human and animal safety.

In the beginning days of the coronavirus pandemic, many people of the western world became infatuated with the documentary series “Tiger King” which took a closer look at some particularly entertaining and horrific examples of exactly this sort of industry abuse. When learning about the facts of wild cats such as servals, it’s important to also weigh the nuances of these sorts of conversations. What’s commodification and abuse and what is conservation? When we are all glued to our TV or visiting a local “safari”, where do we fall on the scale of learning and/or extracting?

With awareness and education comes change and accountability – and maybe just this sort of cultural fixation will lead to positive things. A hopeful thing indeed!

What are Savannah Cats?

Now that we’re all on the same page with servals, let’s turn our attention to the savannah cat – a less wild descendent and popular animal companion.

In contrast their wild cousins, savannah cats are bred to be pets. While they do have serval blood, domestication has made them very different animals.

Domestication can be a slightly confusing concept for some people working to understand how a domesticated species is different from a domesticated wild animal. According to the Oxford English Dictionary, the word is defined as “the process of taming an animal and keeping it as a pet or on a farm.” Domestication of a whole species however is a multi-generational process where humans select for desirable traits over and over again. In doing so, often, some animal species eventually ceases to exist in the wild, or are bred yet again with other wild animals that are close relatives and still untamed.

There are endless versions, attempts, and variations in our history. It is a process that we humans have undertaken time and time again, changing our fate and societies in monumental ways and carrying the descendants of certain animals along with us as we go.

Unsurprisingly, humans have long been fascinated with wild cats. They are prominent aspects of our mythology, songs, and pop culture. With that in mind, it comes as no further surprise that there have been many attempts to breed domestic cats (Felis catus) with species of wild cats. Besides servals, breeds that humans have attempted crosses with include: caracals, Asian leopard cats, fishing cats, and ocelots. The goal of any cross is to capture the aesthetic of a wild cat with the disposition of a house kitty. These attempts have had varying amounts of success. If people do succeed in their attempts, this work of breeding can be an extremely lucrative business endeavor. The price tag on many of these specialty wild-infused cat breeds sell for over 100,000 dollars.

The savannah cat is one of the success stories. The first hybrid was bred in the 1980s. The kitten was named Savannah, giving the breed its identifier. However, it wasn’t until 2001 that the breed was accepted by The International Cat Association (TICA).

Today, this breed of cat is beloved for their distinct features. And they sometimes sell for up and over $50,000.

That is an undeniably large lump of money – and many people will, rightfully so, balk at a number so large. People sure love their pets, though – and cats are one of the most popular furry companions in the world. Even with an average barn cat as a beloved four-legged roommate, most pet owners will spend over $1,000 a year on average in care and food for that animal.

It can be quite challenging to breed wild cats with house cats. While more savannah cat breeders are developing respectable practices, the initial cross is rare. More commonly, the relationship to a serval will be more distant. These are tracked by filial generations. For example, an F1 savannah cat has a serval cat as a parent, and an F2 savannah cat has a serval as a grandparent. In general, generations F4,5,6 are easier to find. And easier to afford. The F1 and F2 generations can be some of the most expensive kittens in the world as the rapper 2 Chainz discovered on his show.

Experts warn that you shouldn’t be suckered in by a “deal”  when trying to acquire a Savannah cat for your own home and daily life. Often, if the cat is much less expensive, there were too many shortcuts taken in the breeding process. A good tip is to make sure the breeder is TICA registered. This can result in long-term health issues for savannah cats. Do your research before investing in your potential kitten!

Besides their alluring appearance, one of the reasons for the savannah cat’s popularity is their dog-like character. These kitties form close bonds with their family. They will greet you at the door, play fetch, and even go on leashed walks! They even will come when called! Notorious for being mischievous and high energy, don’t be surprised if they knock around knickknacks, learn to turn on the faucet, or open doors! And remember serval’s amazing jumping ability? This isn’t lost on the savannah cat. They can jump incredible horizontal and vertical distances. They love cat trees and bookshelves! One wonders if in leaping from shelf to shelf, the domesticated cat senses a genetic echo of their reed-bed weaving, savannah traversing ancestors still roaming the landscapes of sub-Saharan Africa.

While savannah cats do have serval blood, they are domestic. Servals are wild. This is an important distinction to remember. And it is worth repeating: wild animals have a distinct set of needs that are met through distinct habitats, diets, and behaviors, and are not suited to life in a living room. Wildness exists, even within the domestic. This is true of the savannah cat as well as many other examples that surround us all the time – whether you have a cool 50 grand to spend or simply a moment to pause and take in the world around you, you’ll see relationships between the two in enchanting ways.