Things You Forgot in High School: Photosynthesis in Plants • Earth.com 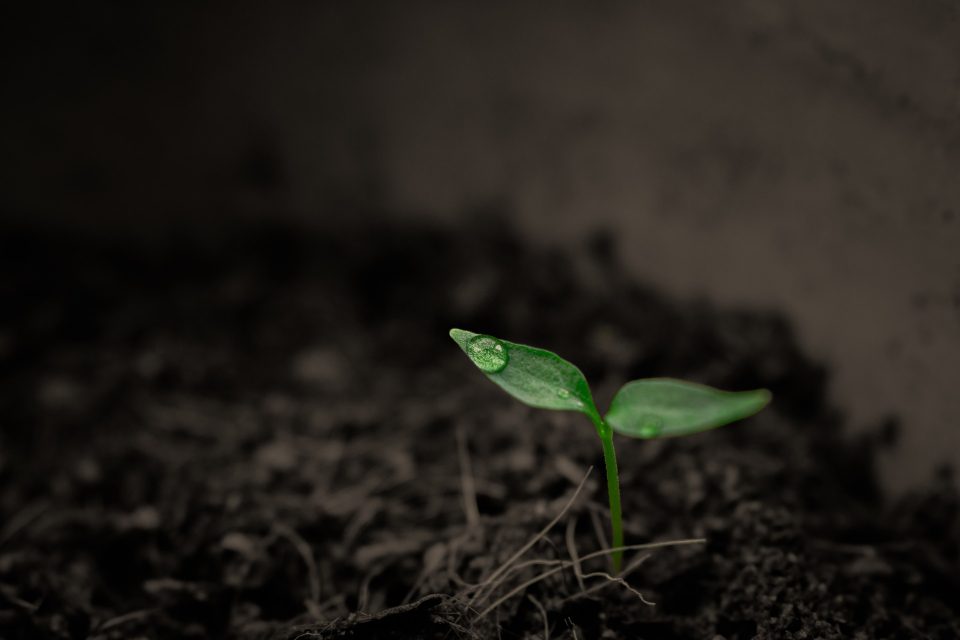 Things You Forgot in High School: Photosynthesis in Plants

Life on earth depends on photosynthesis. Most of the world’s ecosystems rely on primary producers, also known as autotrophs, which use photosynthesis to make their own food. Specifically, they convert solar energy into tasty chemical compounds. These chemical compounds are what most other life depends on. Plants are the most well-known photosynthetic organisms, but algae, bacteria, and even some animals can photosynthesize as well! The process of photosynthesis in plants is pretty straightforward in a broad sense – it converts light energy into chemical energy. But, the actual steps that allow for the conversion of light into plant material are quite complex. You may have learned the full process sometime in high school or beyond, but like many things we learn, the specifics probably faded with time. If you think it’s time for a refresher, keep reading! 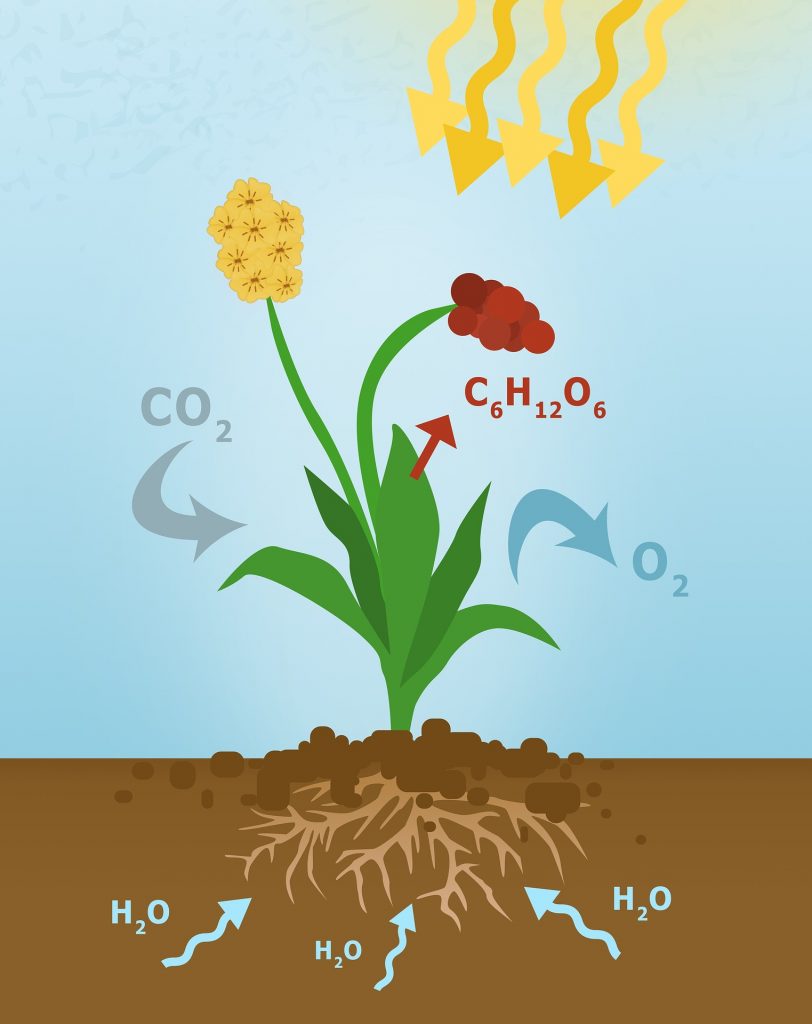 Photosynthesis involves the conversion of light to carbohydrates and follows this equation:

The above equation is only a very rough outline of the process of photosynthesis. There are many intermediate steps, enzymes, and catalysts that allow for the conversion of light energy to chemical energy. Before we get into that, we have to consider how plants acquire these essential nutrients, to begin with. 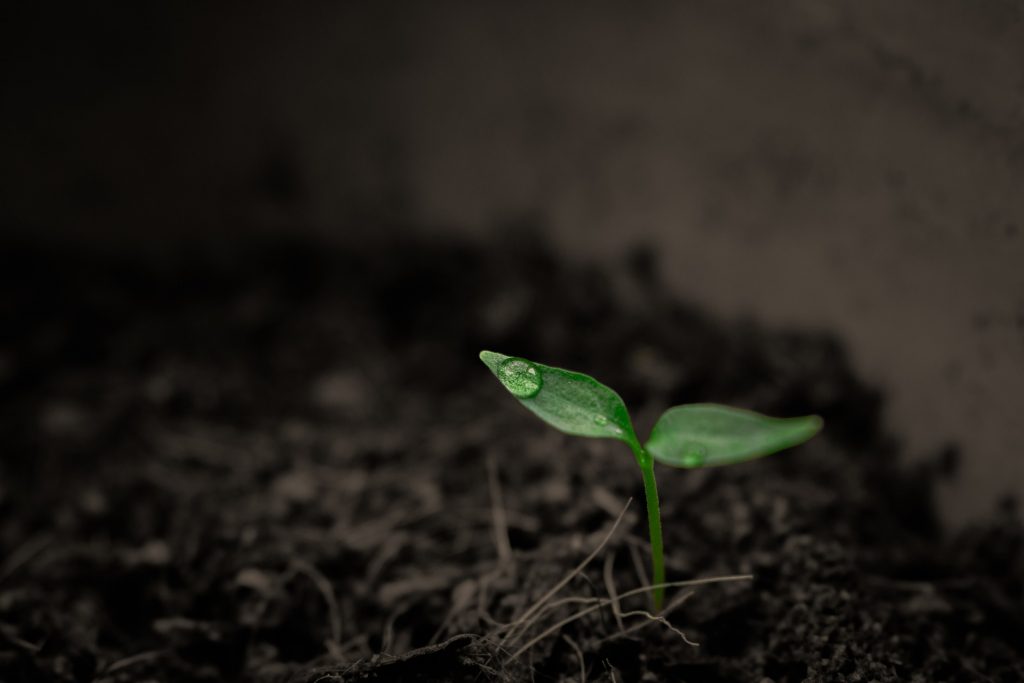 How Plants Get Their Nutrients

For a plant to photosynthesize, it must acquire carbon dioxide, water, and light. All green plants need to do so. But where do these nutrients come from, exactly, and how do plants incorporate them into their tissues?

Carbon dioxide is a gas in the ambient atmosphere. While reading this, you are actively exhaling carbon dioxide. This gas, unusable by animals, is necessary for plants. Leaves of plants have special pores called stomata which are responsible for gas exchange. Carbon dioxide diffuses into the leaf via stomata while oxygen, a by-product of photosynthesis, diffuses out of the leaf into the ambient air.

Plants get their water primarily from the soil. A plant’s roots bring water up from the ground into its stems and leaves, where the water is used for structural support as well as an ingredient in photosynthesis. Water is released through the stomata in the form of water vapor, which is essential in keeping the plant cool and preventing overheating. This process is called transpiration. The hotter it is, the more a plant must transpire.

Finally, light is captured by the photosynthetic organs of a plant. Leaves are the primary photosynthetic organ in plants, but in some cases, stems and even roots can photosynthesize. Some plant species, mainly parasitic plants, have lost their ability to photosynthesize completely and don’t need to take in light. Photosynthesis takes place in mesophyll cells in the interior of a leaf, directly below the upper cuticle and epidermis. 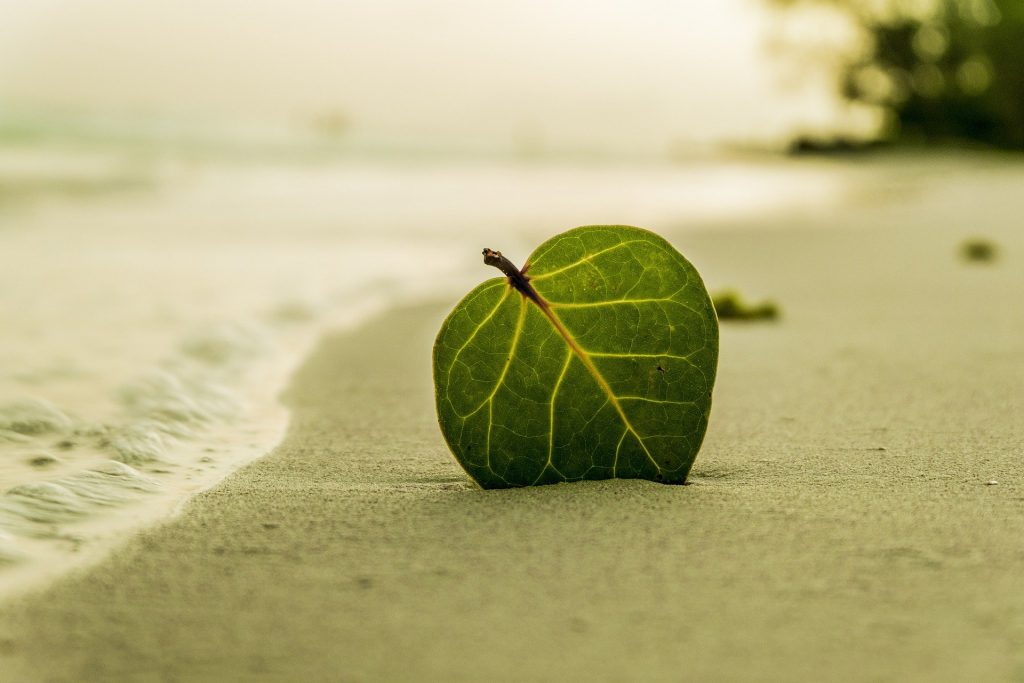 Like most metabolic processes, there are many complex steps to photosynthesis in plants. Different molecules and chemicals take on different roles, all working in harmony in order to convert light energy to chemical energy.

Pigments give things their color. Different pigment cells in plants are responsible for the variety of colors plants can be, but two stand out as the most important.

These orange, red, and yellow pigments absorb blue and green wavelengths. Carotenoids contain carotene, which is what gives carrots their classic orange color. These pigments cannot photosynthesize light energy themselves, but rather they must transfer the energy to a site with chlorophyll. Carotenoids are also accessory pigments. 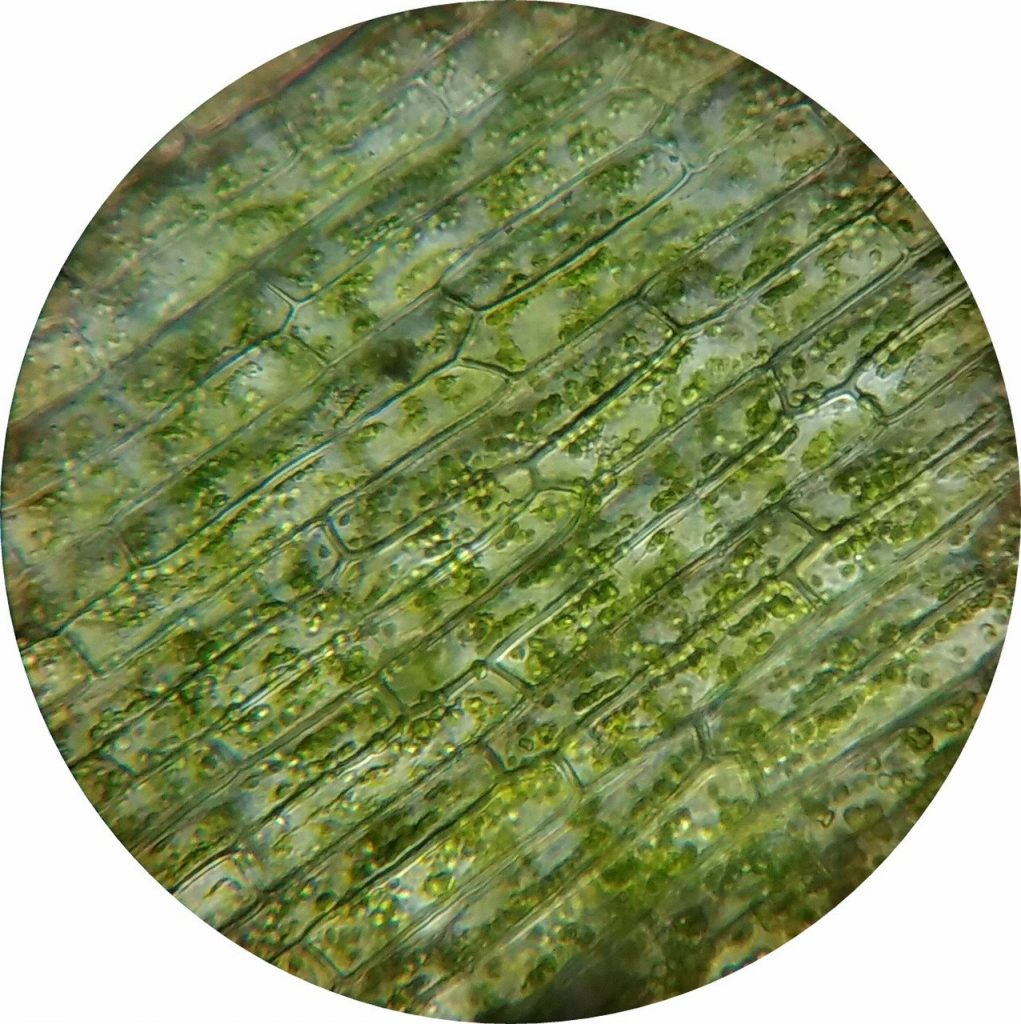 Cells of photosynthetic eukaryotic organisms contain plastids, a type of organelle. Plants have double-membrane plastids that contain nutrients and pigments. Plastids are essentially for creating and storing food. There are several types of plastids, but only one is an important part of photosynthesis.

Chloroplasts are perhaps the most well-known type of plastid. They are also one of the most important organelles in plant cells, as this is where photosynthesis occurs. Chloroplasts are located in the mesophyll cells of the leaves of plants, and within them is chlorophyll, the pigment responsible for absorbing light. Amazingly, chloroplasts have their own DNA and can reproduce independently from the cell they are in. The unique genes in chloroplasts encode proteins that are essential for photosynthesis. Plants themselves cannot create chloroplasts. Instead, they must inherit them from their parent plants.

Chloroplasts have three membrane systems, unlike mitochondria which have two. The first two are the outer membrane and the inner membrane. Within these two membranes is the stroma, a gel-like fluid that makes up most of a chloroplast’s volume. The third membrane system, the thylakoid system, floats within the stroma. Inside the thylakoid system is a network of sac-like membranes which are the thylakoids themselves. Thylakoids are stacked on top of each other like pancakes. Collectively, stacks of thylakoids are called grana. Finally, inside each thylakoid is chlorophyll, the pigments that absorb light energy. 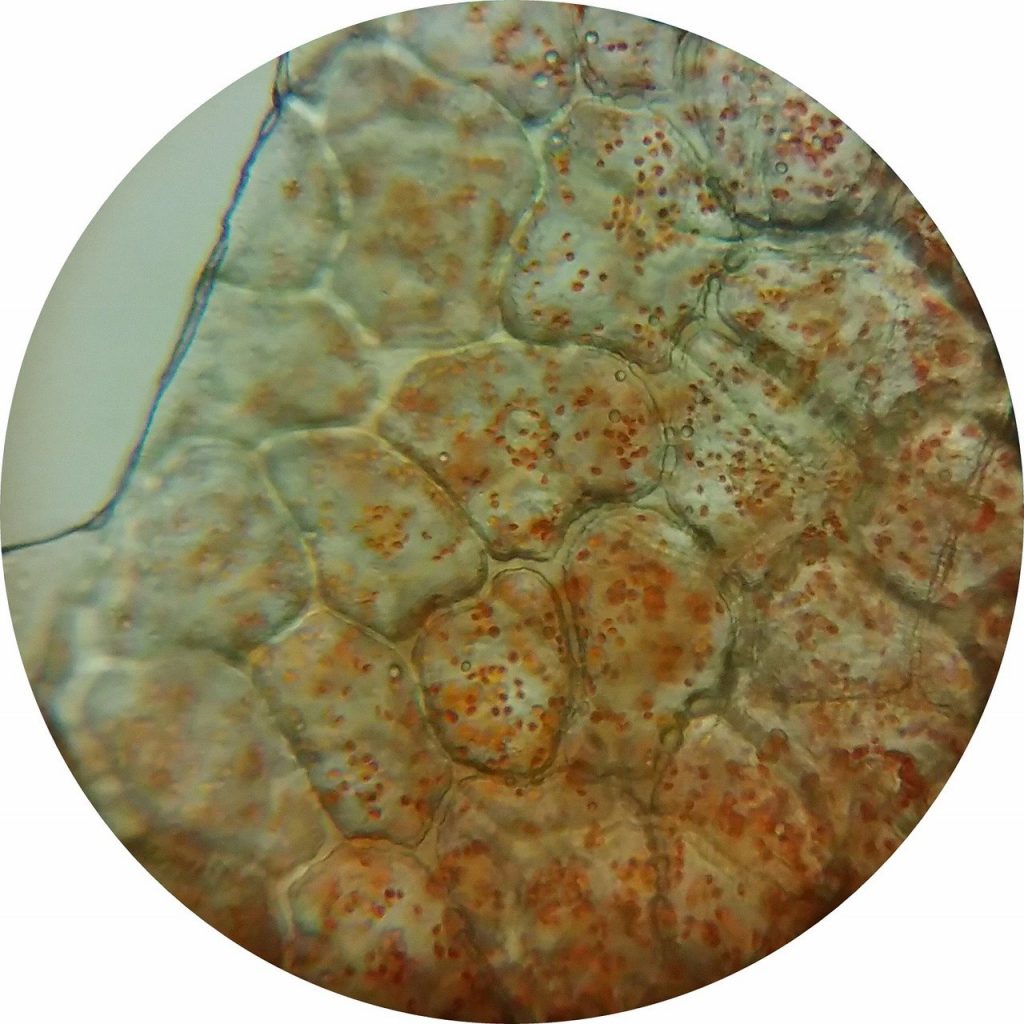 There are two chemical reactions during photosynthesis – light-dependent reactions and the Calvin cycle. These two reactions have to do with the presence or absence of light. Photosynthesis involves many complex organic molecules, which are often abbreviated to simplify their names.

As its name implies, this stage of photosynthesis relies on light. This reaction produces two molecules used in the next reaction. It occurs in the thylakoid membrane (part of a chloroplast) and requires a continuous supply of light energy. Light is absorbed by photosystems, which are complex structures of proteins and pigments. There are two types of photosystems – photosystem I (PSI) and photosystem II (PSII). Each photosystem contains chlorophyll, which forms the basis of photosynthesis.

The first step in the light-dependent reaction is the absorption of light by PSII. As chlorophyll in PSII absorbs photons from light energy, it releases an electron. Now the chlorophyll is an electron short, so it must regain this electron in order to repeat the job. It regains the electron by splitting a water molecule to produce oxygen during a separate process called photolysis. The oxygen diffuses back into the atmosphere through stomata.

Next, the electron follows an electron transport chain and loses energy. This energy helps pump hydrogen ions through adenosine triphosphate (ATP) synthase into the stroma, which ends up generating ATP. This process is known as chemiosmosis.

As the electron from before reaches the end of the electron transport chain, it arrives at PSI. The electron combines with new light energy and reaches a very high energy level.

The Calvin cycle is the light-independent reaction, also called the dark reaction. This uses the newly formed ATP and NADPH from the previous reaction to convert carbon dioxide into sugars. This process involves carbon fixation, reduction, and regeneration.

Carbon fixation is the conversion of carbon dioxide into organic compounds. First, a carbon dioxide molecule combines with a five-carbon acceptor molecule, RuBP. This makes two molecules of a three-carbon compound, 3-PGA. A molecule called RuBisCO is the catalyst for this reaction.

Next, ATP and NADPH use their energy to convert a molecule of 3-PGA into a three-carbon sugar, glyceraldehyde 3-phosphate (G3P). This step gets its name because NADPH donates two electrons, or reduces, 3-PGA to make G3P.

G3P molecules end up either as glucose or to regenerate the RuBP acceptor from the carbon fixation step. This regeneration requires more ATP and is a complex reaction involving many carbohydrates.

In the end, the Calvin cycle produces G3P which goes on to make sugar molecules like glucose and sucrose. These sugar molecules can end up in other metabolic processes to create things like amino acids and lipids. 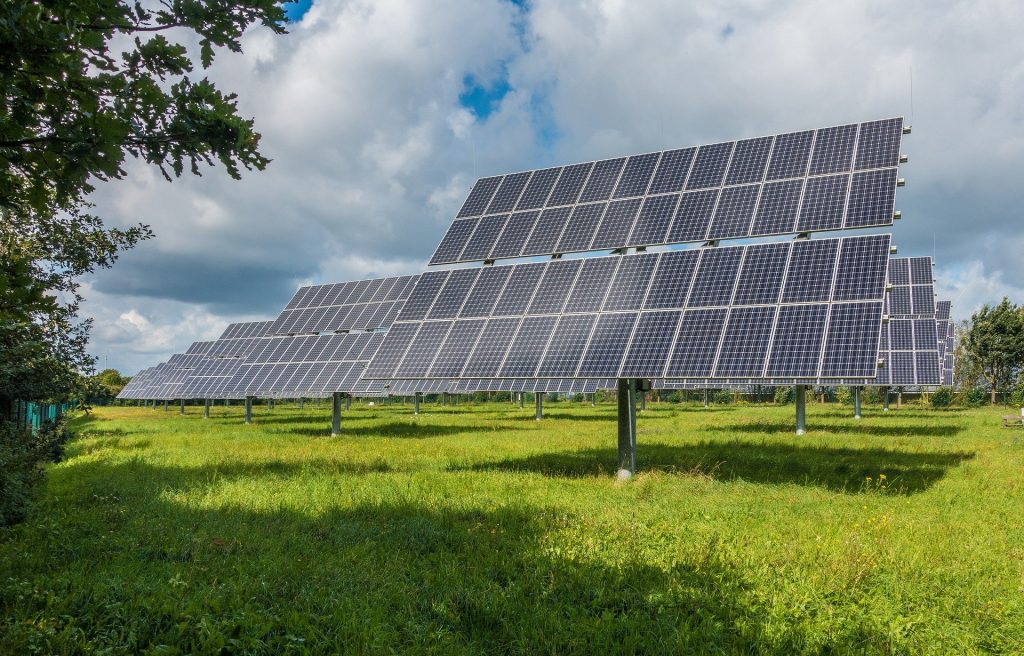 Can Humans Use Photosynthesis?

Photosynthesis is a complex but necessary process for life on earth. By converting light energy into chemical energy, plants produce the carbohydrates and sugar that form the basis of most food chains. The steps required to undertake photosynthesis can seem a bit confusing and convoluted. Hopefully, now you remember all of the details.