Welcome to the Not So Creepy Crawly World of Spider Silk • Earth.com 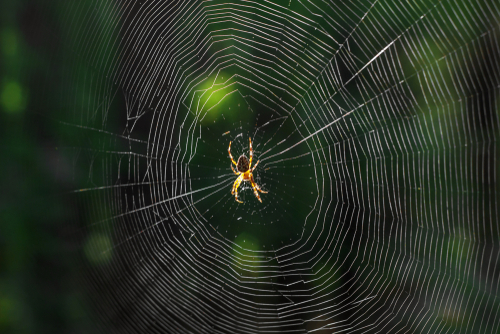 Welcome to the Not So Creepy Crawly World of Spider Silk

Often, spiders inspire fear, discomfort, and a lingering, unnerving sensation. Whether you encounter a poisonous species or not, a spider “shock” can send even the coolest head into an unexpected frenzy. But beneath these cultural conceptions of arthropods are some wondrous behaviors and natural intelligence. One of these elements – and a biochemical phenomenon that has the science world spinning with possibility – is the spider silk of spider webs. The fascinating facts and interwoven phenomena of spider silk are an unfolding mystery. Did you know that these silky threads of webs can be so strong that the fibers can be used as fishing nets? This is just the tip of the appendage on the topic – there’s so much more to learn!

Welcome to the not so creepy-crawly side of these organisms. Prepare to be utterly wrapped up in the facts and mysteries of these master weavers and the power of the fibers they provide.

What Is Spider Silk?

Most people sweep up cobwebs and avoid dense spider nests at all costs – but let’s thread our way into it:

Spider silk is a protein fiber spun by spiders.

This silk is the fiber that spiders use to weave their webs. It floats through the air. Spiders use it to catch and trap their prey. It’s how they build nests and make cocoons. They can even use their silk to glide away from predators. When the conditions are just sunny enough and you pause to take in your environment, you might realize the spider webs, and the strands of silk they weave are all around. You might even catch the enchanting sight of a spider, drifting through the air on these silken fibers – almost like a magic carpet ride of the animal world.

All spiders produce silk – even the species that don’t build webs.

Many people don’t realize that this silk is also intimately woven into the mating and courting rituals of spiders. The silk operates almost like a transmission channel, or a ringing bell – sending signals via vibration along that glittering line. It is stunningly poetic on closer review. Or at least, a beautiful braid of science and poetry together in the natural world in the name of copulation. Maybe Humans and spiders have more in common than we realized.

Another little-known fact: all spider silk is not the same.

A single spider can create up to 7 different types of natural spider silk, depending on the species, circumstances, and life cycles of the spider. Some types of silk are best suited for building structures. Other fibers, produced by the same insect, are ideal for transmitting messages (those mating vibrations!). Other silks absorb energy effectively. All these different silks form the spinning process that a spider undertakes and they also come from different glands. To sum up via list:

You don’t need to be an expert on spider species, anatomy, and glands to be utterly amazed by this capacity to create fiber for such vast and variable scenarios. As garden spiders, black widows, nephila clavipes (aka golden orb weavers), and other arthropods have evolved through history, so have their webs, and the spinnerets that produce this amazing silk. There are simple silk structures – such as primitive tube webs – preserved in the fossil record 300 million years ago or more. There are more complex structures such as orb webs, which first show up in our earth’s history with orb weavers dating back to 110 million years ago. Once you being to ponder this sort of tapestry-through-time that spiders continue to weave, even the cobwebs in the corner of your room start to look a little different.

The Science Behind Spider Silk

So we’ve covered the basics of what spiders use silk for and where they produce this silk – but what is this science behind this silk, and how does it work? These are important next questions.

Spider silk threads are finer than human hair and are also the toughest fiber found in nature. We know a wide variety of reasons why spiders spin their fiber, but even with these understandings, it is no less wondrous that these creatures create fiber in a matter of seconds, under changing and ambient conditions, with entirely renewable resources, to make a material that is even stronger than kevlar. Unsurprisingly, scientists and entrepreneurs alike can recognize the opportunities inherent to harnessing that kind of capability – and later on, in this piece, we will look at the value of spider silk and the rush to find ways to replicate the process in a lab.

The structure of spider silk is a whole wide web of interlocking components and properties. Characterization of the silk includes ” glycine, alanine, and a small amount of serine.” It is “a natural polypeptide, polymeric protein” – in the same group as the collagen found in our ligaments and keratin, found in our nails and hair. Spider silk proteins are determined by which gland they come from. For example, in the instance of a dragline from the Major Ampullate gland, the protein fibroin (Mr 200,000-300,000) is combined with the proteins spidroin 1 and spidroin 2.

It is “the sophisticated self-assembly processes of silk proteins into distinct polymers“. These biopolymers can be the basis for novel products, as we will touch on later. Again according to ACS, the amino acid sequence in the silk proteins are made up of “alanine and glycine” while serine and praline are also present in some types of silk. Glycine-rich regions are what give spider silk its “elasticity, forming amorphous areas in its structure.”

Tensile strength is a term that describes the “amount of stress a substance can withstand before it starts to fracture”. Spider silk ranges from 0.45 – 2.0 GPa. For some context, steel lies in about the same range.

On top of that, this silk is a material that can soften and decrease in length by “up to ∼60% upon exposure to high humidity”. This occurrence is also known as super contraction. The material goes from glass-like to rubber-like – an incredible transformation.

How Is It Different From Silkworm Silk?

Spiders aren’t the only insect that produces silk, of course. There are other species that are famous for their fibers that humans have learned to manipulate and utilize on global levels.

The most well-known of these is the silkworm. And while spider silk is known as a “super silk”, silkworm silk is a super huge industry and another fiber with impressive strength and impact as well. Silkworms are actually the larvae stage of the domestic silkmoth or Bombyx mori. It feeds on white mulberry leaves and, unlike spiders, is entirely dependent on humans for reproduction. It is a domestic species of insect that we have cultivated for millennia. Also known as Sericulture (in the English language of course) the practice of breeding and cultivating these species is at least 5,000 years old – back in ancient China. It spread through India, Korea, Japan, Nepal, all throughout the world today. It is now a silken-skilled species that has been harnessed for mass production – used in clothing, surgical sutures, bicycle tires, and even parachutes.

Some scientists argue that silkworm silk is arguably as strong as some spider silks and that this can be cultivated under the proper conditions as opposed to producing silkworms with their “genes altered”.

What Is The Value Of Spider Silk?

While the powerful properties of spider silk might be new information to you and me, our ancestors likely regarded this fiber highly where they found it in nature. This is because of its legendary healing powers. It was used to dress wounds, cast fishing nets, and more.

So in many ways, we are simply remembering what ancient people already intuited and experienced about the value of spider silk.

And of course, as our societies have changed, our concept of value changes too. In a world that is increasingly commercialized on a global scale, the value inherent to spider silk remains like a golden spool – tantalizingly out of reach. According to an ACS online publication, fabricating” artificial spider silk fibers in bulk scale has been a major goal in materials science for centuries.” This study goes on to describe two main methods of attempted fabrication.

The first is biomimicry – a technique that many species in addition to humans utilize for various needs and desires. Humans, in this instance, are working to mimic the process of spiders in creating their super fiber. This category of technology imitates the natural process in that “the spider silk proteins (spidroins) are produced under native-like conditions and then spun into fibers in a process that captures the natural, complex molecular mechanisms.” However, so far these synthetic spider silks have yet to match the mechanical properties of spider silk.

The second method in the labs uses biotechnology that produces “large spidroins that can be spun into fibers by using organic solvents.” In this scenario, we have been able to replicate the mechanical properties of the natural material, but the yields of the process are too low for ” economically sustainable production”. Research is ongoing regarding recombinant spider silk proteins – and aqueous methods may be a viable method for production.

There are ongoing efforts to produce synthetic spider silk – and scientists describe the need as urgent – but why? What is it about spider silk that has us working so hard to reproduce it in a scalable way?

As we touched on above, and as is probably pretty clear from all the amazing facts about spider silk, the mechanical properties of this fiber are exciting to various people with technological, business, renewable, creative ideas. Stronger than Kevlar, spider silk is a projected game-changer in industries with high-performance textiles and sporting items such as skiing and mountaineering. There is talk of what this silk might provide for durable parts in robotics.

There are predicted contributions to medicine and other composite materials that could reshape and reinvent massive chunks of the pharmaceutical and building resources industries. With so much opportunity swinging in the balance and the tenacity of a human with an idea being seemingly boundless, the urgent race continues to see who might finally be able to weave as well as the spiders of mother nature. Only time will tell. Because spiders’ silk and web designs are “governed by the same rules and constraints that apply to humans’ material science and structural engineering”, we certainly have a lot to learn from their impressive, ancient, and natural skills. Here’s hoping we might also channel their approach to renewable resources and balance within ecosystems as we do so. For now, the spiders float on their golden webs of silk and keep their secrets.