European wildcats could soon see a revival in Britain • Earth.com 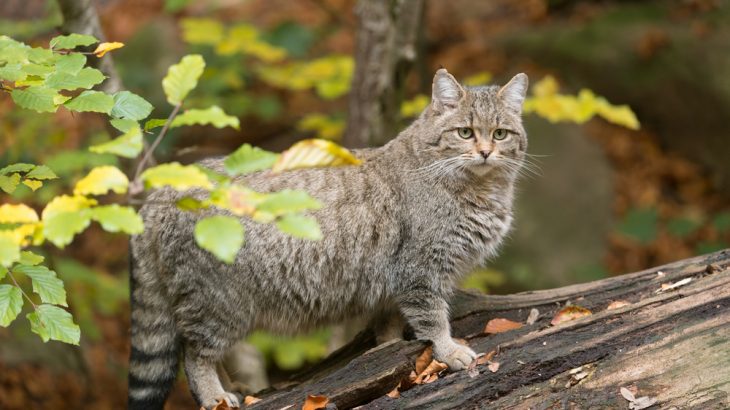 European wildcats could soon see a revival in Britain

Once, European wildcats could be found throughout England, Wales, Scotland and Cornwall. Now, after centuries of culling, there are only a handful of Scottish wildcats left – and not for long.

The Highlands population of cats are not interested in approaching humans – but have mated extensively with their domestic cats. The result is that most of the remaining Scottish wildcats are hybrids, leaving the group no longer viable, according to the International Union for Conservation of Nature.

So scientists are hoping to return European wildcats to Britain by breeding them in captivity, then releasing them into promising habitat in Wales, Devon and Cornwall.

“Wildcats look like the kitty at home but they are like leopards,” big cat expert Marianne Hartmann told The Guardian. “I’ve been working with leopards for many years and the only difference is size, and that leopards can get tame. If you hand-raise lions or tigers, they remain tame for the rest of their lives. Wildcats cannot be tamed under any circumstances. This is very special.”

While the European wildcats look like larger versions of domestic cats, modern house cats descend from African wildcats. The European cats are much less friendly toward humans than their African cousins.

Hartmann is one of a number of scientists who have helped to reinvigorate species on the brink of extinction and reintroduce them to the wild. She helped to guide a successful project to reintroduce European wildcats to Bavaria.

Britain has already had one success story. After a group of beavers escaped captivity in Devon, local wildlife advocates requested to turn it into a trial reintroduction. The experiment has so far proved a success.

The team working on the European wildcat reintroduction plan acknowledged that residents of the target areas in Wales, Cornwall and Devon have valid concerns, especially the farmers.

But the cats could help control rodent and rabbit populations, the researchers pointed out. They don’t take larger prey like lambs, Hartmann told The Guardian, and when they take chickens, they go after one at a time, not several as foxes do.

A breeding facility has already been set up in Devon, with three breeding pairs. Ecologist Derek Gow, who runs the facility and has been behind successful beaver and water vole revivals, is calling for a captive breeding program.

“We need to bring animals from Swiss and German zoos, build up a stock and have captive cats that are capable of producing 150 kittens a year,” he said. “I can produce 3,500 water voles a year if required. We’ve got the land to do it but we’ll find other project partners.”

The Royal Zoological Society of Scotland is already breeding the European wildcats in captivity.

Hartmann warns fellow conservationists that the reintroduction will take a lot of effort.

“The wildcat was there historically, there is habitat left and the most challenging thing is the feral cats,” she said. “If you manage to control that, it can be a big success but a reintroduction is a lifetime’s work. It’s 20 to 30 years. It’s not just releasing animals.”