Massive wildfires are flaring up all over the world • Earth.com 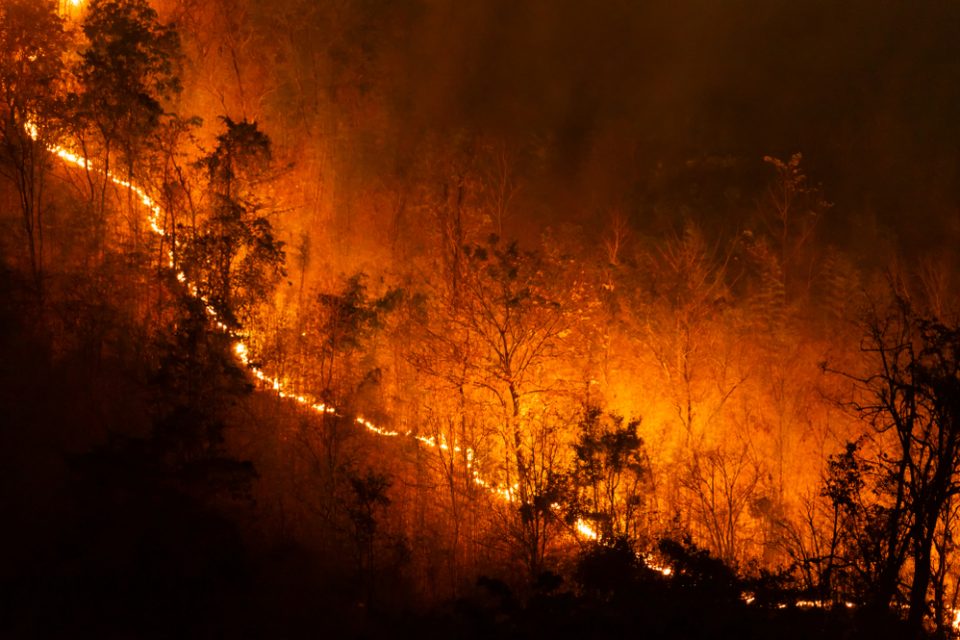 Massive wildfires are flaring up all over the world

Massive wildfires are the new normal.

Whether they’re deliberately set – like the flames burning through the Amazon rainforest – or sparked by accident or natural events like lightning strikes, enormous wildfires have become a part of yearly life.

In 2018, four wildfires in California burned more than 930,000 acres combined, destroyed more than 20,000 structures and killed 100 people. Most of that destruction was from the Camp Fire that ripped through Paradise and surrounding towns so quickly that residents had no chance to flee. California wasn’t alone; fires burned throughout the western U.S.

In 2017, 44 people were killed and more than 8,000 structures burned in California’s North Bay fires. A blaze in Montana spread to 1.2 million acres before early rain and snow in September contained it. Oregon saw more than 1,000 fires in 2017.

Kansas saw the largest fire in its history in 2016 – the Anderson Creek Fire, which also burned in Oklahoma. The Fort McMurray Fire in Canada was the costliest disaster in the country’s history, with nearly 100,000 people evacuated. The Great Smoky Mountains wildfires in Tennessee killed 14 people, the deadliest wildfires in the eastern U.S. since 1947.

North America isn’t the only region seeing an increase in massive wildfires. Fires are raging out of control in the Brazilian Amazon and across Indonesia – in both cases, believed to be deliberately set by growers seeking to clear land for farming – and across Africa and in Siberia, Alaska and the Canary Islands. South Korea saw one of the most massive wildfires in its history in April, and the United Kingdom saw a remarkably early series of fires this spring.

Some scientists are linking the massive wildfires to climate change – and they’re only going to get worse, they say.

“A new normal makes it sound like we’ve arrived in a new position and that’s where we’re going to be,” Dr. Michael Mann of Penn State University told CBS News last year. “But if we continue to burn fossil fuels and put carbon pollution into the atmosphere, we are going to continue to warm the surface of the Earth. We’re going to get worse and worse droughts and heat waves and superstorms and floods and wildfires.”

Several scientists told USA Today that they believed rising global temperatures – and the accompanying drought and other extreme weather – are linked to the current raging fires around the world.

“In these conditions, it is easier for wildfires to grow and to be more long-lived,” Dr. Mark Parrington, a senior scientist at the European Centre for Medium-Range Weather Forecasts, told USA Today.

The number of wildfires in the Amazon has actually been down in recent years, but the current fires quickly raged out of control, he said.

Worldwide, the number of acres burned each year is actually on the decline, in part due to the development of previously wild lands removing opportunities for slash and burn agriculture. But fires are popping up at unusual times – like February in the UK – and in unusual places, like the Arctic. And when they do rage out of control, they are breaking records for size and destructiveness.

“This year has been unprecedented for wildfires in the Arctic,” Dr. Carly Phillips of the Woods Hole Research Centre told the New Scientist.

A record amount of carbon dioxide has been released in the Arctic this year, especially in Russia, the Copernicus Atmospheric Monitoring Service reports.

And that’s worrisome because the Arctic is essentially a giant, frozen tinderbox. The frozen part has been key in the past. Fires just didn’t take off there. But if the area melts and dries out a bit, it could go up in smoke.

“The north is a big tinder box, but it’s been limited from burning by the climate,” Dr. Merritt Turetsky of the University of Guelph told the New Scientist. “If you remove those climatic constraints, all those fuels are ready to go.”

The effects that all that smoke, soot and released carbon could have globally isn’t known yet. But scientists are hoping that world governments and their fire agencies will work together to protect not just people and property from massive wildfires, but areas with “old carbon” such as the Arctic. If they don’t, scientists say, the effects on the climate could be devastating.

“What happens in the Arctic doesn’t stay in the Arctic. Pollution can carry thousands of miles away,” Elizabeth Hoy at NASA said.