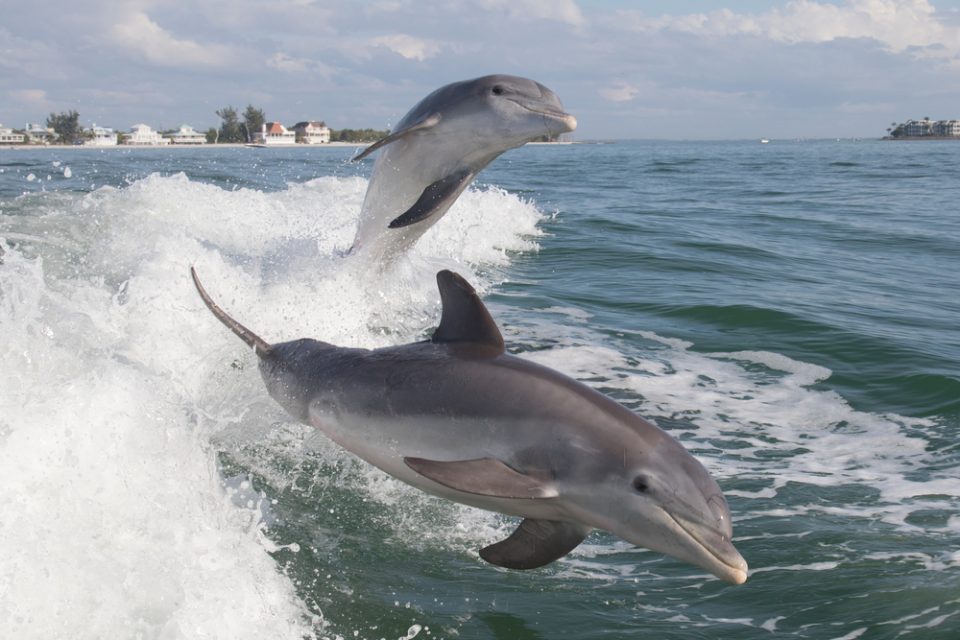 Are Bottlenose Dolphins Really That Smart?

At some point, you’ve likely heard unbelievable stories about dolphins acting in complex and unusual ways. While they can jump through hoops and sing dolphin songs, does this mean they are actually smart?

A Brief Background on Bottlenose Dolphins

The common bottlenose dolphin is an incredibly versatile creature. It lives just about everywhere with warm ocean water, from coastal California to the Mediterranean, from Peru to Australia. They live in places with drastically different ecology, such as the Atlantic Ocean, the Gulf of Mexico, the Indian Ocean, and even off the coast of New York. This dolphin’s range does not extend into cold, arctic waters.

The scientific name for the bottlenose dolphin is Tursiops truncatus. Bottlenose dolphins are marine mammals in the class Mammalia. They are in the cetacean order of mammals, which includes whales, porpoises, and dolphins. The taxonomic family that bottlenose dolphins fall under is Delphinidae. This family contains about 35 ocean-dwelling dolphin species. Fun fact: did you know that ‘killer whales’ are actually the largest member of the dolphin family?

Bottlenose dolphins have a dorsal fin on top of their backs, one flipper on each side, and a blowhole. As a top predator in ocean ecosystems, bottlenose dolphins use echolocation (like bats) to find their prey. These generalist dolphins prefer to eat protein-rich fish but will eat crustaceans, octopuses, and other marine animals if needed. Their ability to adapt to a wide variety of foods is one aspect of their intelligence we will explore.

How Can We Measure Smartness in Other Animals?

If I had a superpower, I would want to talk to animals. I think some of them could provide thoughtful conversation. I’m sure that dolphins would be one of those creatures. Sadly, no one can really talk to dolphins, so it is difficult to figure out whether they have complex thoughts.

This is the real crux of the issue. Humans have a hard time measuring how ‘smart’ one person is compared to another. We have IQ tests that supposedly determine this human intelligence. However, that test is coming under increasing scrutiny for only measuring one kind of intelligence. Someone who gets top scores on an IQ test may not have the mental skills for building a table, catching a fish, or raising a child. If we have such a hard time predicting human smartness, how can we ever measure animal smartness?

This is all to say that our assumptions of what is ‘smart’ beyond our human selves in the animal kingdom may be totally wrong. But when you see an elephant painting or a gorilla using sign language, it’s easy to understand that some animals have particularly strong mental abilities. Bottlenose dolphins are one of those animals.

A bigger brain seems it should imply a smarter animal, right? Well, it’s not that simple.

An initial measure of an animal’s intelligence was the weight of its brain compared to its body. A high brain weight to body ratio was presumed to reveal a ‘smarter’ animal. In many cases, this is true. But in some, it’s not. The tree shrew has the highest brain-to-body ratio, but probably because it is a very small mammal.

Researchers eventually started using the brain encephalization quotient (EQ) instead of a simple brain-to-body ratio. Researchers plotted the brain-to-body ratios for many species of mammals and then drew a straight line that was the ‘average’. This line demonstrates the predicted brain size for an animal of any mass. If the animal’s brain is bigger than expected, their dot on the graph would be above this EQ line. Bottlenose dolphins are second only to humans on the EQ test. This means that their brains are far bigger than we would expect based on their body size.

Size is important, but so is the substance within the brain. The actual structure of the brain matters a lot in intelligence. Dolphins also have highly developed brains that commit energy to ‘thinking’ rather than just ‘doing’. These dolphins also have a large number of special types of neurons that are thought to make humans smart.

With current research, it is difficult to prove consciousness in dolphins. But that doesn’t mean they aren’t conscious of themselves. Perhaps we just haven’t figured out how to measure dolphin consciousness yet.

An animal’s ability to recognize itself in the mirror is a widely accepted test for intelligence. Recognizing oneself on the other side of a mirror shows a sense of self. Humans take about two years to reach the milestone of self-recognition. Dolphin babies are far quicker and can recognize themselves in the mirror at seven months old.

Bottlenosed dolphins’ social structures are profoundly intricate. These dolphins gather in mixed-sex groups to hunt. These dolphin pods are fluid, with members moving between pods. Some dolphins move around a lot, but others seem to prefer more long-term relationships. The pods also don’t seem to be hierarchical. Maybe dolphins share knowledge by moving between these pods? Dolphins seem to be unique individuals as well as social beings. Dolphins also have unique personality traits that map neatly onto the ‘big five’ human personality traits.

In addition to complex social structures, bottlenose dolphins use language to communicate with one another. They apparently use unique whistling sounds as humans use names. A unique whistle corresponds to one individual dolphin within the group. Secondly, Russian researchers found that bottlenose dolphins in the Black Sea communicate in sentences up to five words long.

You can communicate a lot in five words. Cozy mountain tent with coffee. Riding bike with scary cars. See that? What could the dolphins be saying…

Sometimes science can be a little dry for the subject matter. While scientists are trying to determine bottlenose dolphin smartness, there are plenty of fun anecdotes from around the world that confirm dolphins have a very high baseline for intelligence.

Bottlenose Dolphins Use Pufferfish to Get High

Some bottlenose dolphins like to adventure into the world of altered reality. Some people have seen groups of bottlenose dolphins delicately passing around a pufferfish. Pufferfish have deadly toxins that can kill humans. However, the dolphins seem to have figured out how to get a small enough dose that they get some sort of intoxicating effect from the pufferfish. The fact that many bottlenose dolphins can partake in puffer-puffer-pass without any of them chomping down and killing themselves with toxin demonstrates some sort of sophisticated communication and understanding of reality, right?

Bottlenose Dolphins in Florida Use Mud as a Net

Bottlenose dolphins in the Florida keys team up to chase schools of fish into very shallow water. One member of the group then flips up mud in a circle around the fish. The fish then freak out and try to jump over the ‘net’ of mud. Unfortunately for the fish, plenty of dolphin beaks wait to catch them on the other side. This teamwork shows thoughtful, group-facilitated hunting techniques. I would call that ‘smart’, wouldn’t you?

Dolphins in Brazil cooperate with small-scale fishermen to catch fish from those fisheries. 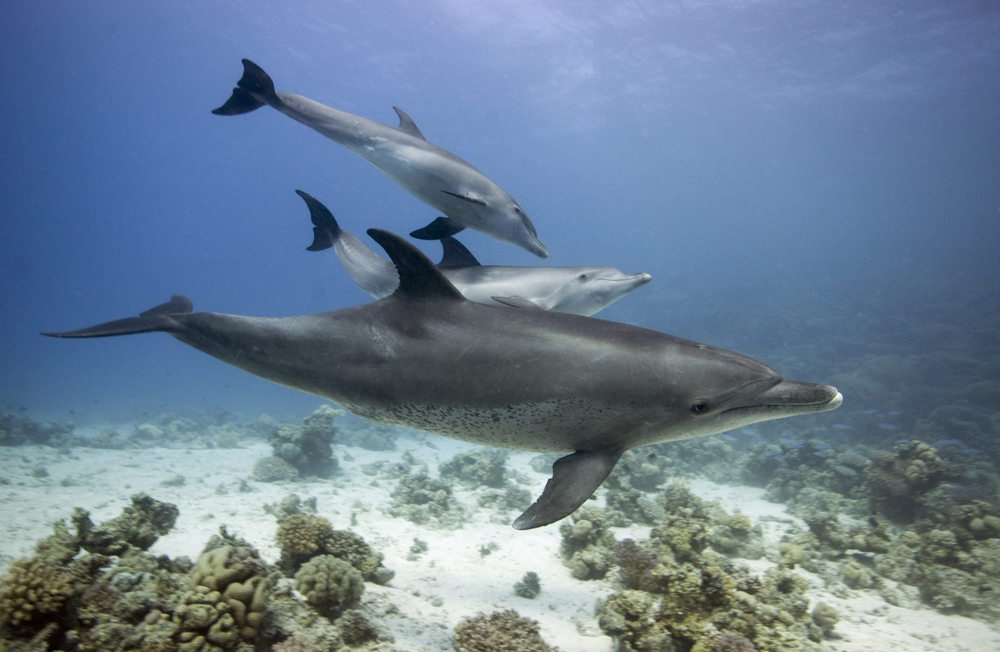 Dolphins Groups Can Change Their Behavior

Bottlenose dolphins can drastically change their lifestyle when confronted with adversity. When coastal development impacted a group of dolphins off the coast of Florida, they changed their feeding to times with little construction activity and found different foraging grounds. This example of highly adaptive behavior is one of the factors for why bottlenose dolphins live all over the world.

It should be interesting to follow the topic of dolphin smartness (and animal intelligence in general) into the middle of the 21st century. As science delves deeper into the mystery of dolphin brains and lifestyles, we may learn that we humans aren’t as intellectually exceptional as we would like to think.