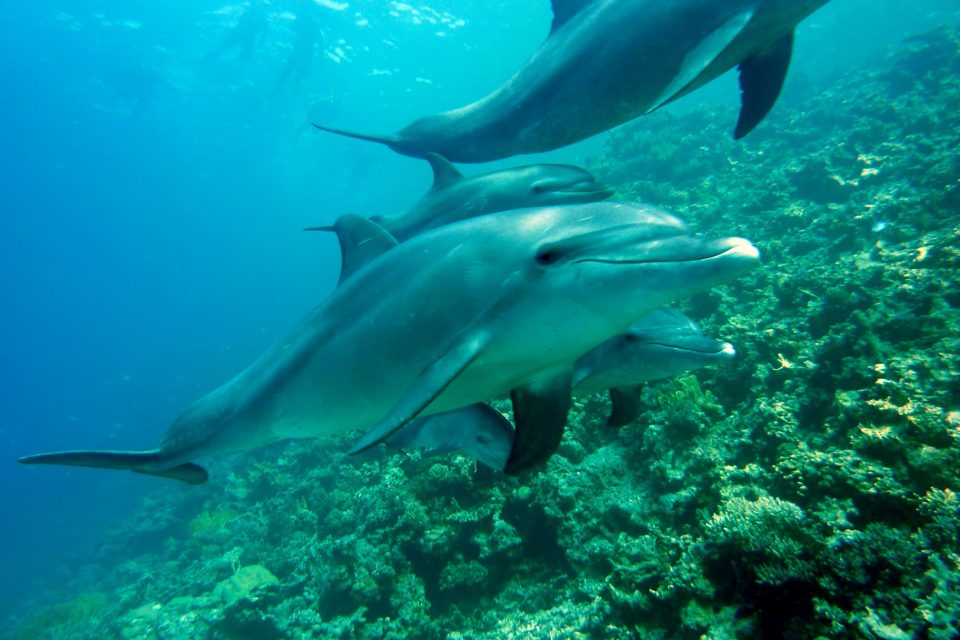 Are Dolphins Smart? How Are Dolphins Intelligent? We humans tend to arrogantly assume our intelligence is leaps and bounds beyond that of any animal. However, other animals, including dolphins, show many signs of intelligence and complex thought.

Though humans are undeniably highly intelligent animals, it is difficult to pin down the traits that distinguish our intelligence from that of other animals. Other animals can use tools, communicate, and even experience complex emotions.

A better question than whether dolphins are smart or not may be HOW are dolphins intelligent? Understanding the areas in which these creatures excel may help us understand intelligence in general.

A popular test of intelligence is the “mirror test,” which tests whether animals acknowledge their reflection. This test demonstrates self-awareness. Though self-awareness is one important element of human intelligence, it is just one piece of the puzzle.

Defining intelligence in animals is difficult. A species’ problem-solving techniques vary greatly based on the situations they encounter. It wouldn’t do a dolphin much good to know tons about how to climb trees. However, that certainly doesn’t mean they are less intelligent than squirrels.

Dolphins have many intelligent behaviors. They are extremely social animals with complex communication and relationships. Dolphins are able to pass information between generations, teaching skills to their extended family!

This ratio is called the “encephalization quotient” (EQ) and is measured in a number of different ways. It often accurately indicates species that humans deem “intelligent,” but it is far from perfect. It is difficult to compare the EQ of distantly related species like humans and dolphins.

Dolphins are second only to humans in EQ! Though this doesn’t tell us how smart dolphins are, it does support the observations of their intelligence.

Dolphins and whales show many signs of intelligence and complex thought. This group of aquatic mammals (the Cetaceans) use tools, communicate, and even have funerals! In captivity, these species can be trained to perform complex tasks and even recognize symbols.

Dolphins can understand how the order of words changes their meaning. When taught to recognize symbols, they can differentiate between the phrases “ball to the hoop” or “hoop to the ball.” Dolphins have also been trained for complex tasks such as hunting mines in the ocean. 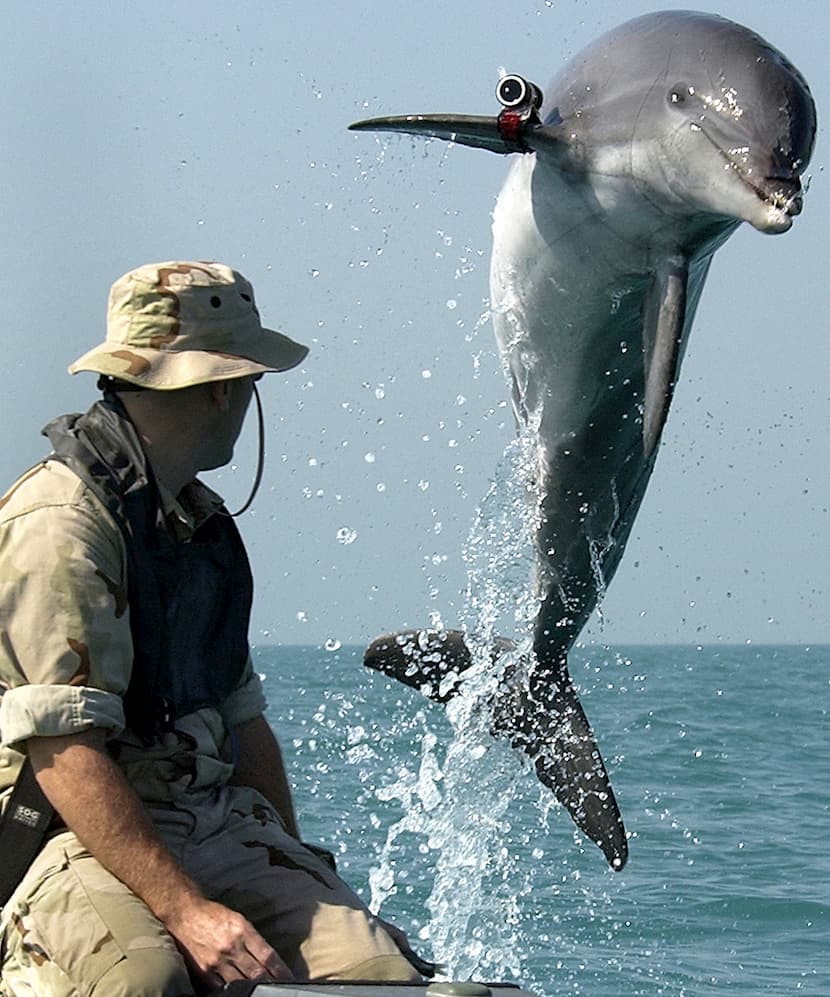 K-Dog is a Bottlenose dolphin trained to find mines. He is wearing a “pinger” that helps handlers keep track of him.

Dolphins and other cetaceans have complex social lives. They live in family groups and form strong bonds with each other. These groups communicate with each other, and even likely give each other unique “names.”

Another example of dolphin intelligence is empathy. For example, dolphins mourn the loss of members of their families. In addition, their empathy extends beyond their own species. There are many stories of dolphins coming to the aid of drowning people, carrying them to the surface for air.

These complex behaviors obviously show that dolphins are intelligent. Their social behaviors, communication, empathy, and use of tools reveal their intelligence. Though defining or measuring their intelligence is difficult, it is obvious that these creatures have a lot on their minds! 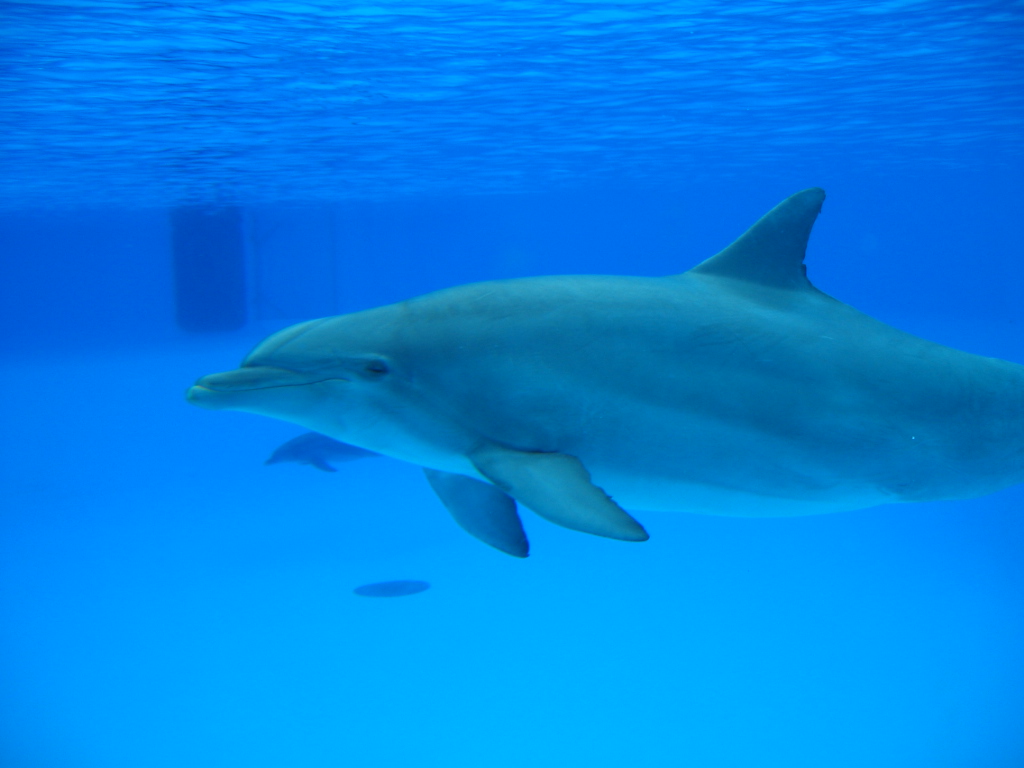 Dolphins in captivity are limited to less than one one-thousandth of 1% of their natural range.

With our understanding of Cetacean intelligence comes a responsibility to respect these animals. The lived experience of a dolphin may not be that different from our own. If these animals can empathize with us, it seems we should be able to empathize in return.

We should all do what we can to protect dolphins from hunting, sonar, and abuse. Protecting their habitat is also essential. The oceans are filled with man-made garbage that kills animals and throws off the ocean’s delicate ecology.

Other Brainiacs of the Animal Kingdom

Dolphins aren’t the only animals that have surprised humans with their intelligence. A number of species have proven to be quite clever.