What are Moon Tides? • Earth.com 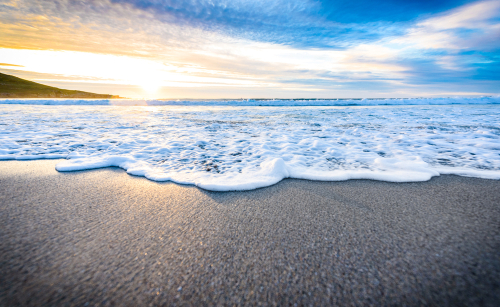 What are Moon Tides?

You’ve likely heard that the moon is responsible for tides on Earth, but have you ever actually thought about why? While the moon has the biggest effect on Earth’s tides, the sun and the ocean’s shape also have effects that increase or decrease the tide. The effects of the moon on Earth’s tides are called moon tides. Moon tides are the main focus of this article.

Moon Tides from the Moon Orbiting the Earth

There are two high tides each day. As the Earth completes its 24-hour, day-long rotation, the side of the Earth which is closest to the moon constantly changes. This is why a high tide happens every 24 hours (actually, it’s 24 hours and 50 minutes, but more on that later).

Each day there is a second, lesser high tide. This second high tide occurs on the side of Earth furthest from the moon. Initially, that doesn’t seem to make much sense, right?

This is how the moon tides work on a day-long period.

Phases of the Moon Impact Moon Tides (Sort Of)

Moon tides also depend on a month-long time scale. When the moon is full and new, Earth experiences spring tides. When the moon is half full (a waxing or waning gibbous), the Earth experiences neap tides. Neap tides are weak, meaning the difference between the high and low tides is small. Spring tides, on the other hand, are strong. Spring tides and neap tides, while correlated with the moon, are technically not moon tides; they are solar tides.

The sun also exerts gravity on Earth and contributes about half as much to the tides as the moon. The effect of the sun on tides is called solar tides. Acting together, the moon and sun create large tidal forces.

Bonus fun fact: When three celestial bodies are lined up they are in ‘syzygy.’ Can you believe a word like that exists?

When the moon is half full, the moon and sun make a right angle, with the Earth in the middle. In this position, the moon tides and sun tides interfere with each other, creating small neap tides.

It takes the moon 29.5 days to completely orbit the Earth or to go from full moon to full moon. This is called the moon’s “synodic” or lunar month. Kind of like how the hour and second hand on a clock move at different rates, the moon slightly outpaces the Earth’s 24-hour rotation. This means that the moon will be in slightly further along in the sky once the Earth does its complete 24-hour rotation. If you divide 24 hours by 29.5 days (the moon’s orbit around Earth), you get about 50 minutes. This is why lunar tides are 24 hours 50 minutes and why the time of the high tide gets later by 50 minutes every day.

The Shape of the Moon’s Orbit Impacts Moon Tides

When the moon is full or new and in its perigee, the moon is a supermoon. The gravity of the combined sun and moon, plus the closer-than-usual position of the moon make for exceptionally high tides.

The Earth’s Orbit is Also Elliptical

The Moon Has An Even Longer Orbit

The moon also has a wobble in its orbit that changes the magnitude of tides on 18.5 year scale. This wobble will make tides higher than usual in the 2030s.

The Shape of the Continents and Ocean Floor

While not the scope of this article, the shape of Earth’s oceans, coastline, and ocean floor all contribute to the vast differences between tides in different coastal areas.

Combining the Factors to Make the Biggest Moon Tide

The highest tide would happen when many of these factors occurred at the same time. First, the moon must be a supermoon, where the moon is new and at its perigee. If the super moon this happened around the New Year, when Earth is closest to the sun, it would be a massive tide. If this combined with a storm, heightened sea levels from climate change, and the moon’s 18.5 year wobble, it would likely be the highest water level possible. Tides such as this pose great issues to low-lying coastal areas, which are prone to devastating tidal flooding.

Moon tides have lead to the evolution of special tidal critters and all sorts of interesting animal behavior. Next time you are at the beach make sure to pay attention to the moon, how the time and height of the tides change from day to day, and how the birds, and fish use the tides to their advantage.