Diving Into the Crazy and Beautiful World of Nudibranchs • Earth.com 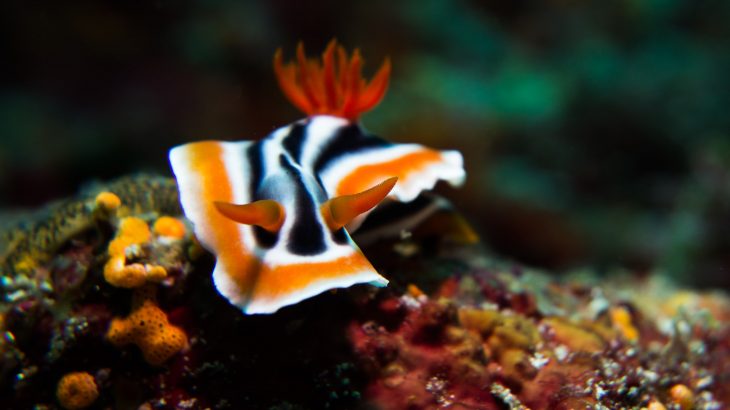 Diving Into the Crazy and Beautiful World of Nudibranchs

A nudibranch is a kind of sea slug. With over 3,000 species in the order of Nudibranchia, these colorful clowns are full of intrigue and surprise. Living in a variety of marine ecosystems, nudibranchs have some fascinating qualities…and they aren’t trying to be discrete. These shell-less gastropods have evolved into a rainbow of bright colors and patterns, with some crazy appendages too! In fact, the name “nudibranch” derives from the Latin word nudus meaning “naked” and the Ancient Greek word bránkhia meaning “gills,” referring to their naked gills that protrude like stalks or feathers from their bodies. Beyond their wild appearances, nudibranchs have also developed some pretty alien adaptations. Read on to learn more about their incredible ecology and aquatic superpowers!

Life As a Nudibranch

These bejeweled slugs are not just funny-looking, they also have a fascinating ecology. Below, we’ve provided a bit of background on nudibranchs, including helpful terms and fun facts. 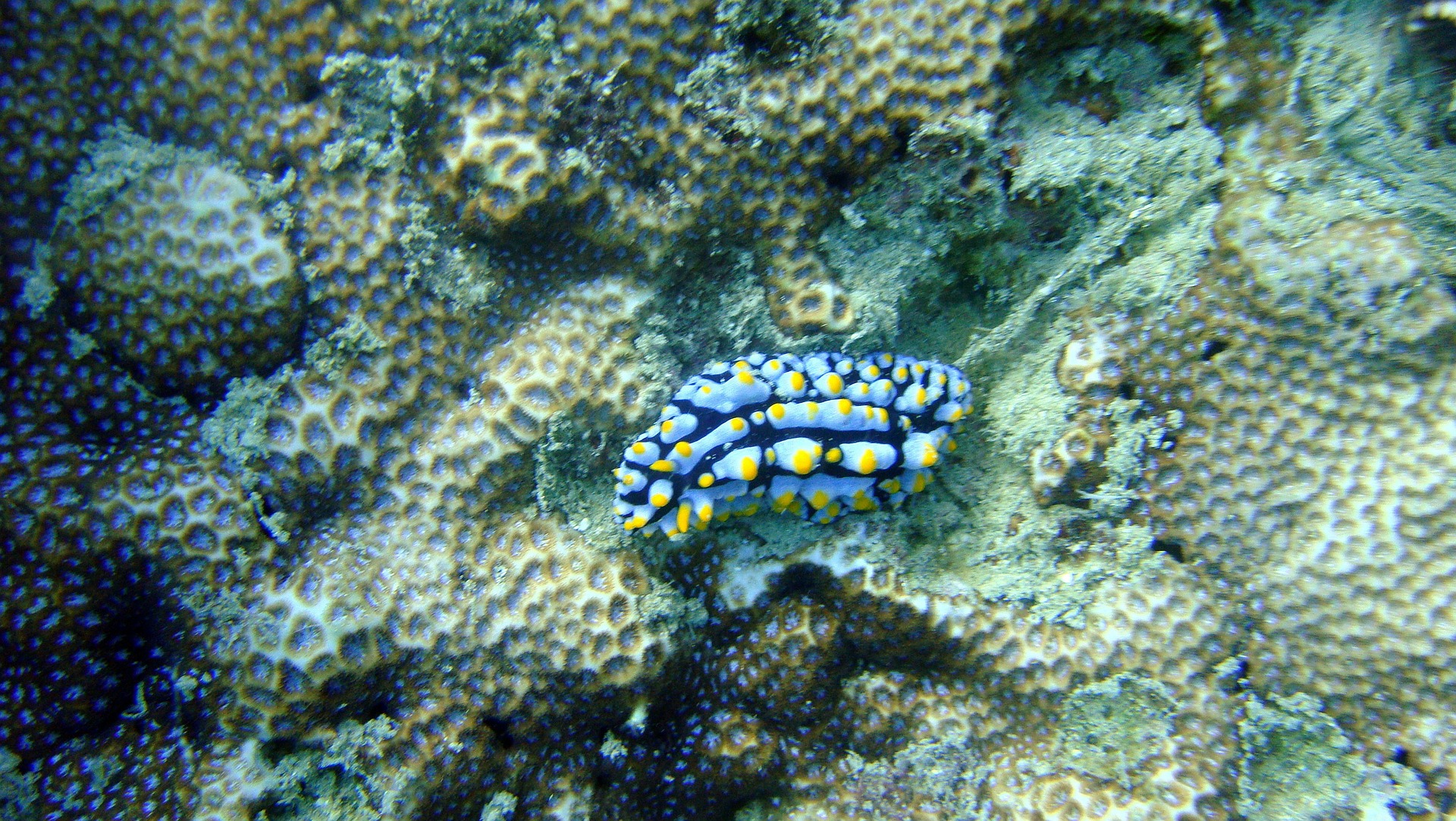 The first impression of a nudibranch might make you think it’s the love child of the 1970’s psychedelic era and aliens from the future. But we (along with marine biologists around the world) have learned to accept a wild appearance when it comes to ocean life. Nevertheless, these squishy invertebrates should get awards in both funk and spunk, given their diversity in color and texture.

However, there are a handful of characteristics that all members of the order have. For starters, nudibranchs stay smaller than 10 cm in length, though some can be microscopic while the largest species is almost 40 cm. Though different species may appear very different, their similar morphology can give us fascinating insight into their physiology. Below are a few terms and their descriptions to help you better understand these.

Nudibranchs are found in the phylum Mollusca (mollusks) and share the class Gastropoda with other slugs and snails. Gastropods are the most specious class of animals outside of insects. That means we’re dealing with quite a few types of slugs and snails. They can be found on land and in water, and even these marine gastropods can be found across several different orders. That’s where our nudibranchs break off. They fall in the order of Opisthobranchia, including all the marine slugs such as sap-sucking slugs, sea hares, side gill slugs, and bubble snails. Finally, because of their diet and gill placement, the suborder Nudibranchia breaks off from the other opisthobranchs.

This classification goes further with two subgroups of nudibranchs, divided again based on more specific gill placement. Dorid nudibranchs are the most common types of nudibranchs and have a concentration of cerata that form a ring around their anus, called a branchial plume. (You read that right – they breathe where they poop!) Aeolid (or eolid) nudibranchs, on the other hand, have cerata spread more evenly across their mantle. 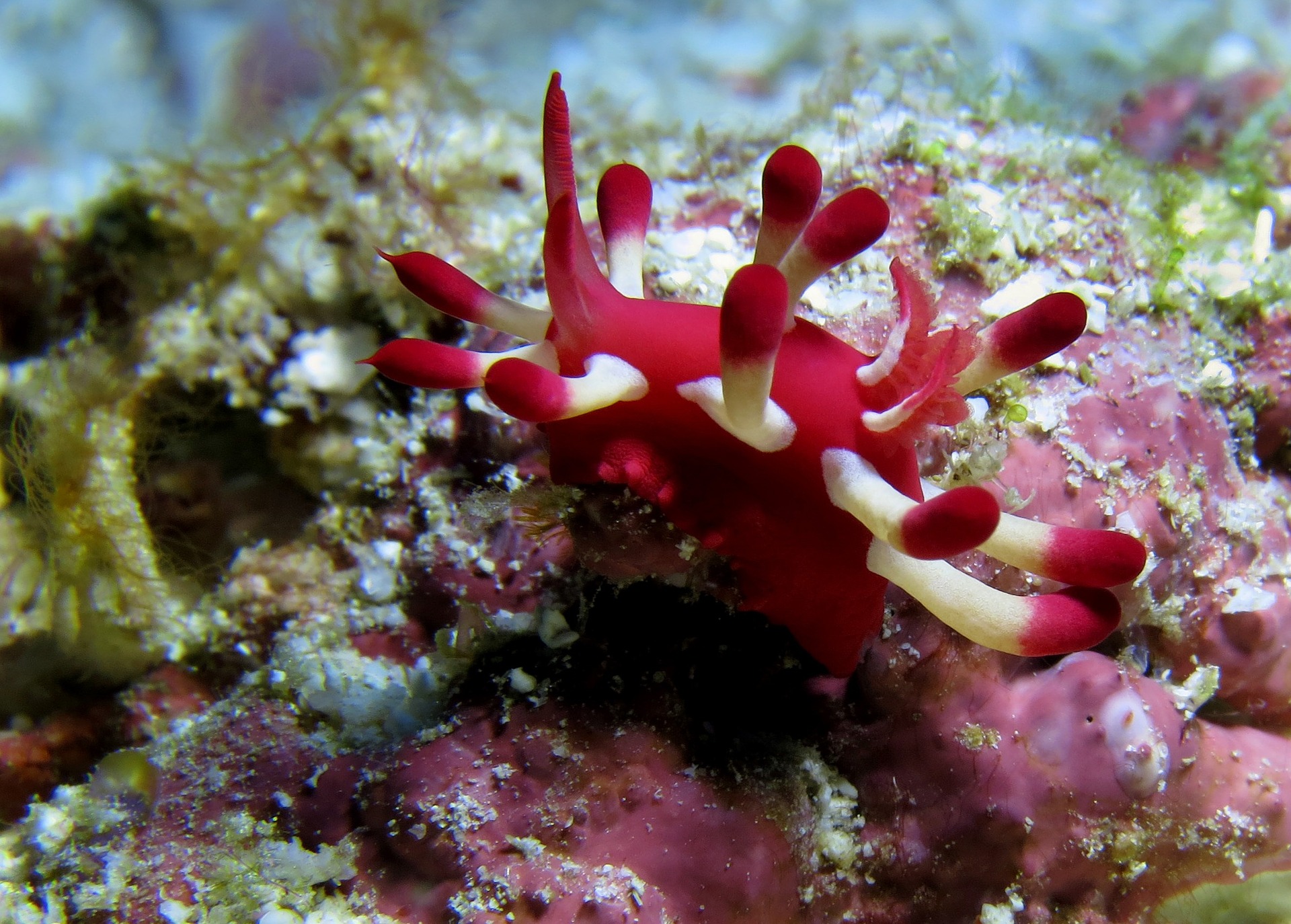 Image by Monica Volpin from Pixabay.

Surprising as it may be, these small, squishy, colorful slugs are all predatory carnivores. However, hunting isn’t a very athletic pursuit. They feed on filter-feeding animals like corals, sponges, barnacles,  and anemones. Some species of aeolid nudibranchs do trap sea jellies as their food source, though this is about as tactical as they get.  Some nudibranchs will even eat members of their own species.

Living throughout the world’s oceans, these marine slugs peruse the seafloor from tidepools to depths up to 6,500 feet. Most species of nudibranch prefer benthic, or ground-dwelling, life and spend their time oozing across the sea bed. However, a couple of types are more agile swimmers and hunt for food near the surface or in the water column.

Like most gastropods, nudibranchs are hermaphrodites, meaning a single individual has both male and female genitalia. However, they can not self-fertilize, so will still seek out another nudibranch to mate. They will then lay a gelatinous mass of up to one million eggs. When the baby nudibranchs hatch, the larvae look more like snails as they have tiny shells. When the larval form metamorphosizes, however, the shells fall off to reveal the shell-less adults in all their colorful glory. Like many mollusks, nudibranchs don’t live very long. With some fluctuation depending on environmental conditions and resource availability, the lifespan for most species sits around 18 months. 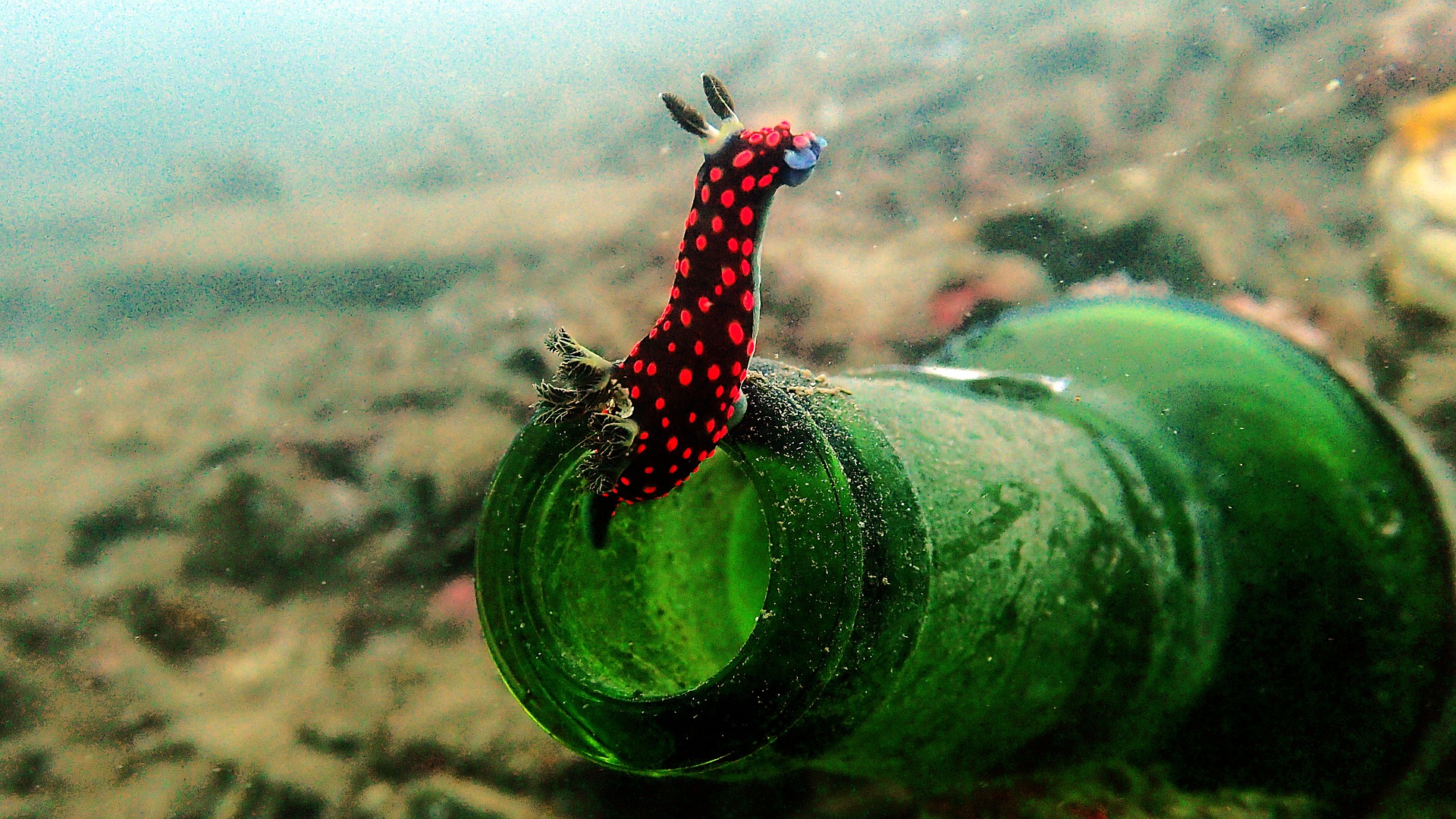 Image by Florent Horn from Pixabay.

Just as a pretty addition to the coral reef, nudibranchs are fascinating. But there’s a bit more to their crazy and beautiful world. In fact, most nudibranchs have some unbelievable adaptations, akin to superpowers. Who knows? Maybe the next blockbuster superhero movie will be inspired by these marine slugs!

If you ask a nudibranch its favorite meal, it will most likely say anything in the phylum Cnidaria. This fascinating and diverse group of creatures includes coral, true jellyfish, hydroids, anemones, and box jellies. And they all have one thing in common…they sting.

All cnidarians have specialized stinging cells called nematocysts. Each cell contains a barbed, coiled thread that can spring out in self-defense and inject the threat with venom! This strategy has mostly worked out for cnidarians, as very few animals want to eat them. But that leads us back to the real stars of the show.

Nudibranchs demonstrate a phenomenon in which they can eat their cnidarian prey without activating the nematocysts. Instead, they are able to incorporate these specialized cells into their own anatomy by passing the nematocysts from their digestive tract to their skin and repurpose them for their own self-defense. Nudibranchs essentially absorb the defense adaptations of another creature for their own gain!

One amazing example of this can be found in the Blue Dragon nudibranch with the scientific name Glaucus atlanticus. Unlike its bottom-dwelling relatives, this nudibranch swims toward the surface to pick off its prey. Quite the daring feat, as its prey is none other than the Portuguese man o’ war. To hunt it, the nudibranch sucks air into its body to help it rise to the surface where it floats upside down, waiting for its prey. Since the Blue Dragon steals from one of the most dangerous siphonophores in the ocean, its readapted sting can also pack quite the punch. 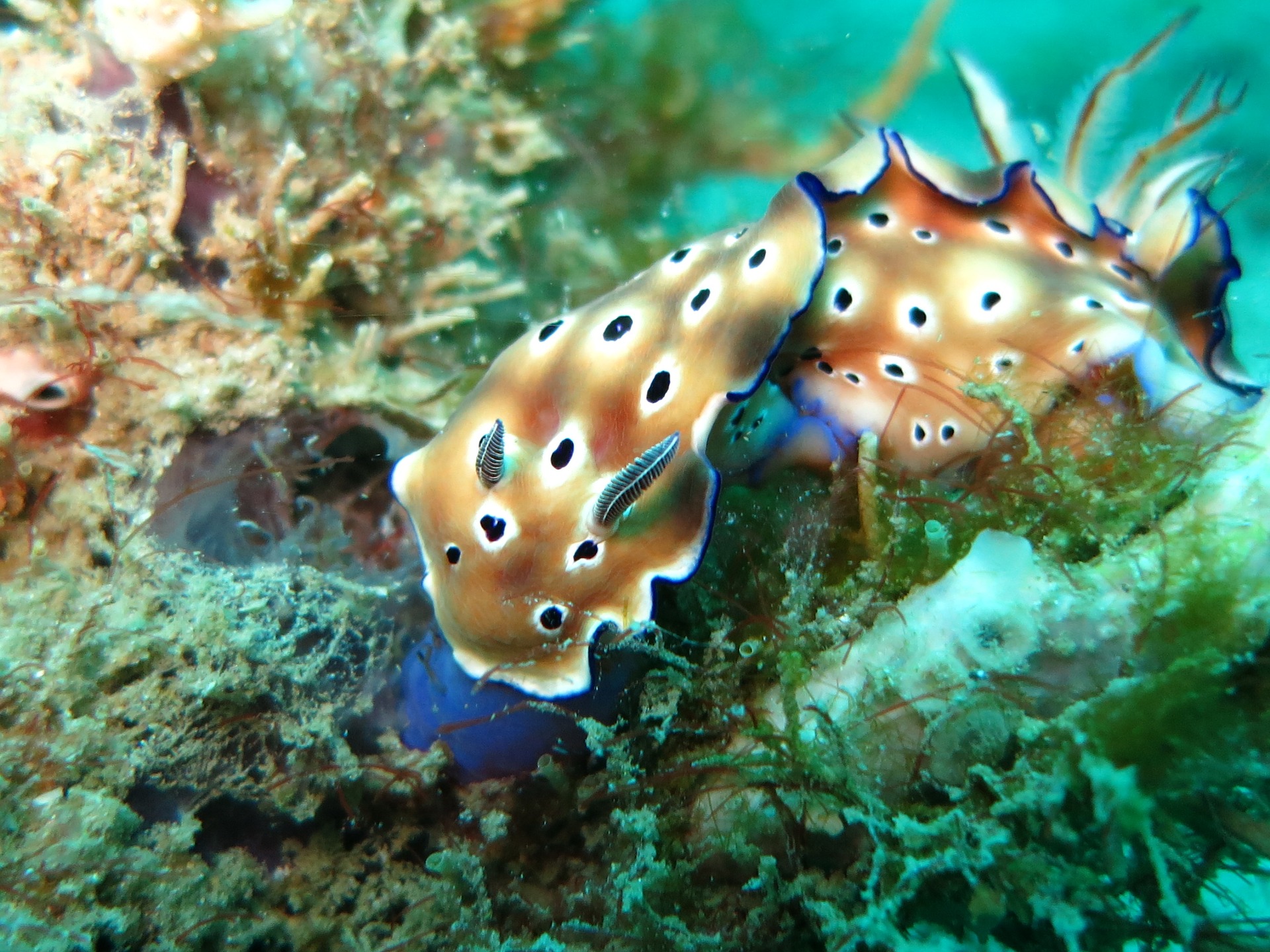 Image by Arhnue Tan from Pixabay.

Not only can nudibranchs steal the stinging cells from their prey, but a small group of aeolid nudibranchs can also swipe another amazing superpower. These marine slugs add a type of zooxanthellae (microscopic green algae) to their diets, allowing them to incorporate cells containing chloroplasts into their own anatomy. As a result, they can make their own food from sunlight through photosynthesis!

Famous for their bright colors, nudibranch’s appearance captivates scuba divers and blog readers alike. But why do these sea slugs look like they are headed to Coachella? Depending on the species, there can be two different answers to this question: camouflage or aposematism.

When an organism uses striking colors and patterns to warn of its toxicity, this adaptation is called aposematism. Think of it as a visual “Don’t Eat Me” sign. Since nudibranchs are able to absorb the stinging cells of their prey, this warning is a good thing for their potential predators.

In addition, many nudibranchs spend most of their time perched on the corals, sponges, and anemones that they eat. Since many of these ocean critters are brightly colored themselves, the nudibranchs are barely perceptible among the reefs. It turns out that their spectacular colors make for a cryptic camouflage (blending in with their environment)!

A World to Explore

Without a doubt, these tiny, rainbow slugs are a true treat of marine life. And as official members of the nudibranch fan club, we can all do our part to support more research, education, and conservation of these incredible animals. Unfortunately, most species haven’t been accessed, so we don’t have a great idea how environmental challenges affect them. However, early research shows that obstacles such as pollution, habitat degradation, and ocean acidification have caused declines in nudibranch populations. For the sake of all the amazing oceanic ecosystems, let’s do what we can to keep the psychedelic nudibranch around to inspire generations to come.