The History of Earth in Exactly 2000 Words • Earth.com 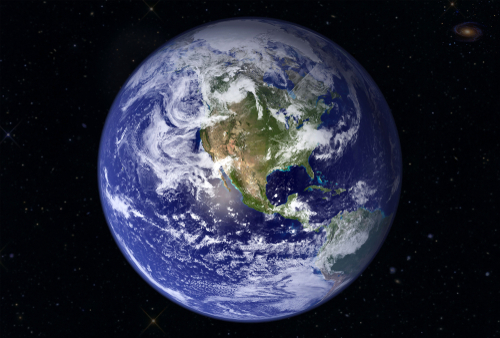 The History of Earth in Exactly 2000 Words

The universe is 14 billion years old. Earth, in contrast, is merely a third of that age. The earth’s formation occurred around the team time as our solar system’s formation.

Our solar system was probably caused by the supernova of another star. A supernova is an incredibly powerful explosion of a star. That explosion creates a shock wave that travels outwards. The solar nebula hypothesis proposes that the shockwave from a supernova swept up any space dust that was out in the ether towards the front of a sort of wave. Think of it like sweeping up dust from your floor. As all of this dust, which was spread out over unimaginable distances, becomes (relatively) concentrated in one area at the front of the shock wave, the gravitational pull from each piece of dust began to pull the dust together. This process is called accretion. Accretion continued and the dust turned into rocks, which turned into asteroids, and got bigger until our planet and sun formed.

The first eon in the history of Earth was the Hadean Eon. The earth’s surface was a molten ball of magma during this eon. The Hadean eon was incredibly violent, with lots of major impacts from accretion still happening.

Theia and Our Moon

One particularly noteworthy impact was when the planetary body Theia dealt a glancing blow to early Earth. Both celestial bodies were molten. When Theia hit Earth, Theia tore off a chunk of Earth’s mass. Theia continued on her orbit, but the torn-off chunk of Earth did not. As it cooled, this chunk remained in the Earth’s orbit and turned into our moon.

As with everything in geologic time, scientists are currently rethinking the creation of the moon, with some arguing that it wasn’t Theia’s impact.

The late heavy bombardment marks the end of Hadean eon and the beginning of the next eon, which is the Archean. The late heavy bombardment was caused when gas giants Uranus and Neptune fled further away from the sun. This change in solar system gravity caused tons of asteroids, comets, and meteorites from the asteroid belt to be pulled closer towards the sun, and therefore Earth. Tons and tons of these asteroids impacted Earth, Venus, Mars, and Mercury. These collisions made Earth gain mass and heat.

We have no rocks from the Hadean Eon because the Earth was all lava. Scientists believe life couldn’t have formed before the incredibly riotous time of the late heavy bombardment.

Archean Eon – The Origins of Life

The Archean Eon wasn’t nearly as violent as the Hadean, but Earth still wasn’t a place you would want to visit. After the late heavy bombardment, the crust of the earth was able to solidify into a rock, rather than magma. Earth had no atmosphere and the land was completely inhospitable.

The First Fossils, the First Life

The first fossils of life on earth appear about 4-3.7 billion years ago during the first part of the Archean era. Of course, early life was incredibly basic compared to what we’re used to today. Viruses also appeared around this time. Some scientists think the relatively rapid appearance of living organisms on earth, being only a few hundred million years after the planet itself appeared, is evidence supporting the existence of life all over the universe. The oldest fossils we know about are in Australia and date to 3.5 billion years ago.

About 3.5 billion years ago, life figured out how to capture energy from the sun via photosynthesis. These ocean-dwelling microbes released oxygen as a byproduct. However, this oxygen didn’t help create an atmosphere just yet. Instead, the high concentration of iron in the oceans reacted with the oxygen, preventing it from escaping out of the ocean.

Proterozoic Eon – Something and Then Nothing

The Proterozoic eon is, by far, the longest in Earth’s history, at about 2 billion years. Earth’s atmosphere and lithosphere (rocks) changed significantly during the first part of this period. The second billion years of the Proterozoic, in contrast, were not very exciting.

Oxygen began to accumulate in Earth’s atmosphere around 2.3 billion years ago. The accumulation of oxygen distinguishes the Archaean Eon from the Proterozoic Eon.

Ironically, the addition of oxygen to the oceans and atmosphere was catastrophic for life on Earth, at least in the short run. Life in the oceans had evolved to live in an anaerobic, or oxygen-free, environment. The introduction of oxygen led to the extinction of many of these anaerobic bacteria.

As the name implies, the period from about 1.8 to 0.8 billion years ago was remarkable in only one way; that Earth was stable and not much happened. Tectonics didn’t shift much, life didn’t really evolve, there weren’t many available nutrients, and the climate didn’t change.

Some scientists think that eukaryotes (life with a nucleus) evolved all-important characteristics during the boring billion, such as sexual reproduction, which made the Cambrian explosion possible. Additionally, algae and the beginnings of plants evolved during this time. But considering this was over 1000 million years, those evolutionary accomplishments seem fairly minimal. I guess all of us, the Earth included, need periods of rest.

Geologists aren’t exactly sure when the Earth’s crust divided into different plates, causing plate tectonics. This may have happened anywhere from 1-3 billion years ago. Scientists who argue for the more recent evolution of plate tectonics believe that this process couldn’t have happened when the Earth was still a ball of magma or otherwise very hot. Ever since the late heavy bombardment, the earth has been cooling. As the crust of the earth turned from magma to rock, tectonic plates were able to form.

Plate tectonics has been essential to the development of life on Earth over the past billion years. These tectonics create mountain ranges and oceanic troughs. Along with glaciers that crushed rocks, the eroding of mountains made via plate tectonics provided the nutrients necessary for life to finally end the boring billion.

550 million years ago to present

All the nutrients pouring into the ocean from eroding mountains provided the building blocks for life to diversify. The beginning of the Phanerozoic Eon is marked by the Cambrian Explosion. Tons of exciting life forms first appeared during this time. Importantly for us, the first animals evolved during this biological explosion. While we don’t have fossils of the very first animals, creatures like hallucigenia and jellyfish give us clues into the first animals that swam (they were all sea-dwelling) the earth. Here are just a few examples of new life that evolved during the explosion; sea creatures evolved eyes and legs, mollusks appeared, predators evolved jaws and teeth, and worms evolved plume-like gills.

About 470 million years ago plants finally made the move from the ocean to land. About 100 million years later, these plants began to resemble the plants we have today with roots, leaves, and stems. Fun fact: grass hadn’t evolved by the time dinosaurs walked the Earth.

Supercontinents – A Crucial Step in the History of the Earth

The formation and breakup of the supercontinents Gondwana and Pangea had massive impacts on the history of the earth. The size of landmass, the location of that landmass relative to the poles of the earth, and the volcanic activity of that landmass all contributed to the different climates of the Phanerozoic eon.

Of course, dinosaurs are an integral part of the history of Earth and our current eon. Dinos evolved about 250 million years ago and dominated the earth until 66 million years ago. You may recognize the words Triassic, Jurassic, and Cretaceous. These are all periods of geologic time, which are smaller than eras, which in turn are smaller than eons. Dinosaurs roamed during these three geologic periods, which together make the Mesozoic era.

Since the Cambrian explosion, there have been six mass extinctions (including the human-caused one happening today). These extinctions were major events in the evolution of life because they culled down the number of species on the planet. Over the next tens of millions of years, new forms of life evolved from those that made it through the extinction, eventually leading to the world of life we know today.

Some people speak of evolution as if the appearance of humans was the end goal of evolution. Evolution has no goals and will continue long after humans go extinct. We are merely a byproduct of natural processes. As demonstrated above, if the age of the earth was condensed into 12 hours, humans would appear 11 hours 59 minutes 58 seconds into that 12 hours. Our presence is very new to this planet.

However, a history of Earth necessarily ends with the evolution of homo sapiens because that’s where we are today. Some scientists are fighting for the Anthropocene to become our present-day geologic epoch. This geologic period would start after World War II, when humans began to change the climate and create vast amounts of waste, especially plastic. Evidence for this new geologic period is the presence of plastic all over the world, which will eventually become incorporated into rocks and earth’s lithosphere, the rapid warming of the planet, and the mass extinction event happening currently.

Geologists as a whole haven’t accepted the designation of the Anthropocene as its own geologic period, but that may change in the coming years.

The History of Earth Continues