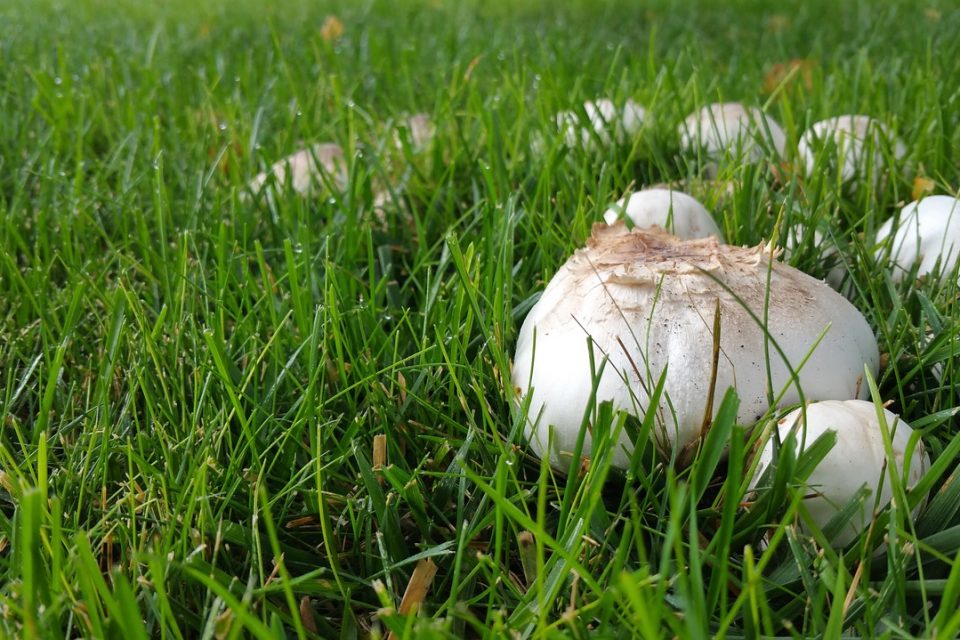 Backyards are quite lovely. They can be so many different things. Some people have a simple lawn, while others commit to spending lots of time gardening. Other people have replaced their lawns with drought-tolerant plants. Some homeowners plant native plants to encourage wildlife and make habitat. No matter the type of backyard, I can assure you one thing- it will absolutely have fungi.

To Kill or Keep Backyard Mushrooms?

Lawn owners sigh when they see mushrooms pop up in the middle of their turf. Wildlife gardeners might rejoice in seeing a new species. If you don’t want mushrooms in your back yard, I’ve got tough news. It’s virtually impossible to eliminate them. If somehow you were tricky enough to eliminate fungus from your backyard, many plants wouldn’t be able to survive. Fungi are an essential part of all fertile soil. They break down organic matter and turn it into nutrients that turf grasses or tomatoes use to grow. Next time you see mushrooms fruiting in your backyard, view it as an essential part of the life cycle.

However, there are a few steps you can take to minimize fungus in your yard. First, you can simply mow over or knock down the fruiting bodies. While this won’t harm the fungi in the soil, it will temporarily get rid of the mushrooms. Second, get rid of rotting material, such as wood and leaves. Fungi use this material as food. If you take it out of your yard, less fungus will be able to survive.

Fungus fruits into mushrooms in wet, shady conditions. Theoretically, a homeowner could get rid of all shade and never water their yard, and voilà! fewer mushrooms would fruit. Herbicides will do nothing to mushrooms because they are not plants. Fungicides exist, but using these chemicals will only get rid of mushrooms temporarily. The easiest path to success is to welcome mushrooms into your backyard!

Keep in mind that the fungus kingdom is incredibly diverse. While only 50,000 species have been described in North America, scientists believe that over 5 million species could exist worldwide. No article could begin to address all of the fungi, but here’s a start. 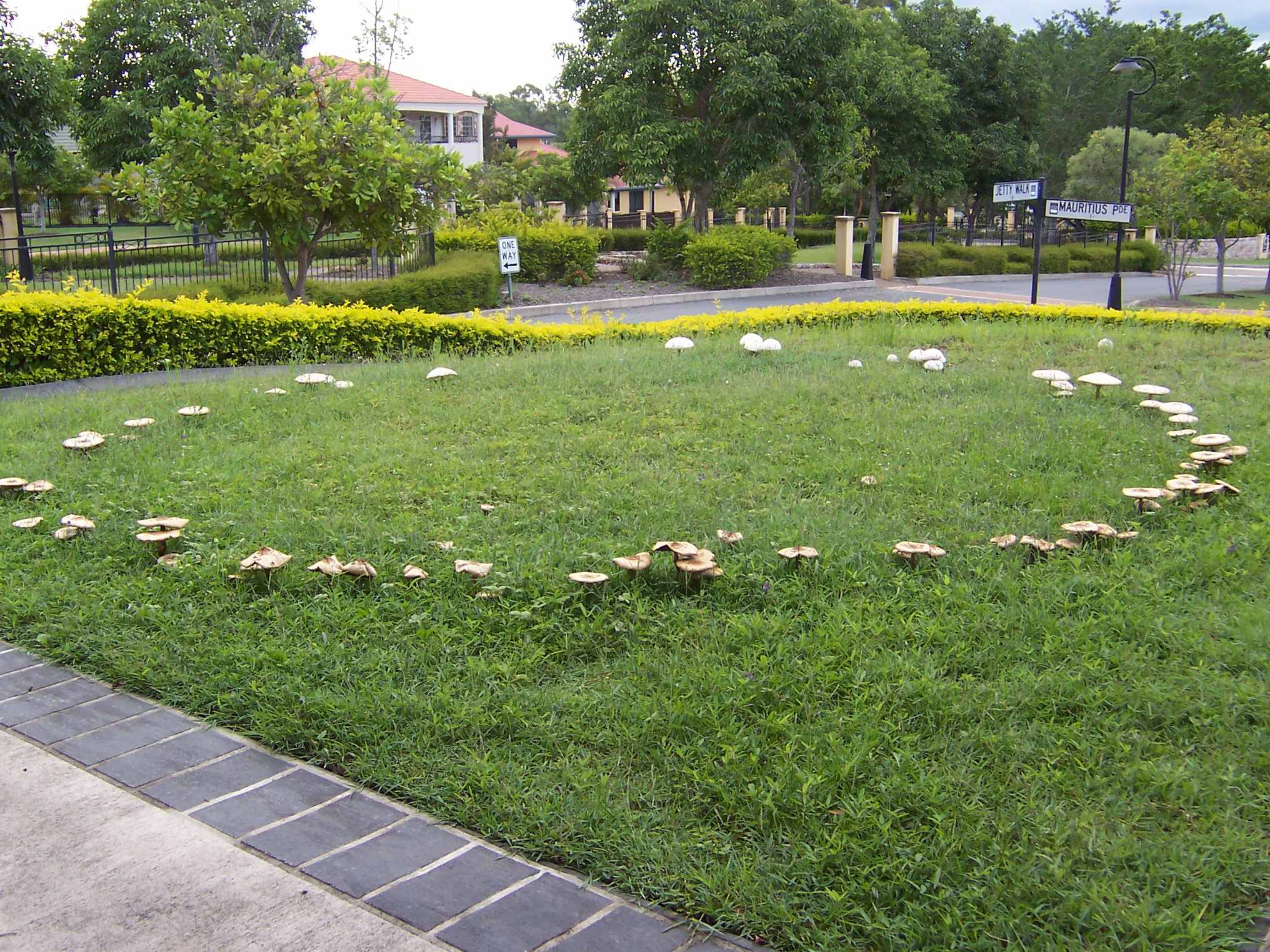 These magical features seem to appear out of nowhere. There are about 60 species of fungus that form fairy rings in lawns, and they all belong to the group Basidiomycetes. These fungi begin at a center point, which is typically a tree stump or a large, buried piece of wood. Fairy rings are especially common in grassy areas that were previously wooded, because the soil contains a lot of mushroom food. The fungi use this wood as food to grow outwards, in a circle. Some kinds of ring-forming mushrooms create beneficial plant nutrients. These good nutrients cause grass to grow taller in the fairy ring. Other species of fungi can make it difficult for water to enter the soil. These kinds of mushrooms can kill grass in the fairy ring because the grass can’t reach any drinking water. Other kinds of fairy rings leak chemicals into the soil that poison grass. Yikes!

Fairy rings can grow until the fungus uses all of the nutrients in the stump or buried log. The largest known fairy ring is in France. It spans 2,000 feet across, and is thought to be 700 years old! Imagine what sort of nutrient load must be at the center of that circle. Fairy rings are common in folklore and mythology. Next time you see a fairy ring, contemplate the wonder! 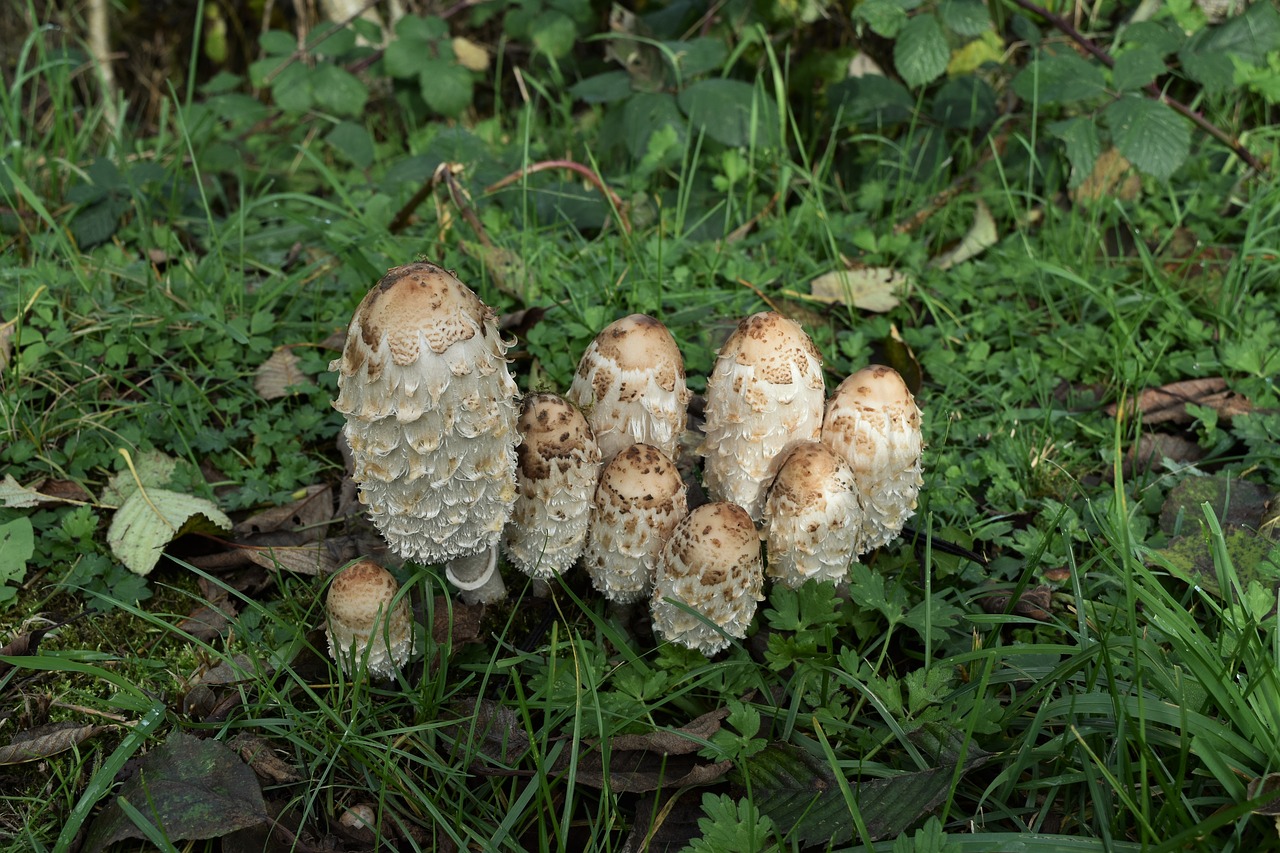 Mushrooms from the genus Coprinus often show up in backyards. The most charismatic of this kind of mushroom is the Lawyer’s Wig (also known as shaggy ink cap). This mushroom grows in a tall cylinder. When it is ready to release its spores, the mushroom will dramatically change from white and plump to inky blank and shriveled in a few hours. This can also happen if you pick them.

This sort of yard mushroom is edible, as long as you cook it before it turns into an inky mess. In China, these mushrooms are even cultivated as food. Like always, please don’t eat mushrooms if you aren’t experienced at identifying them.

While we eat this mushroom, it is busy eating nematodes in the soil. A small group of fungus specializes in attracting and digesting these little soil worms. That’s pretty cool! 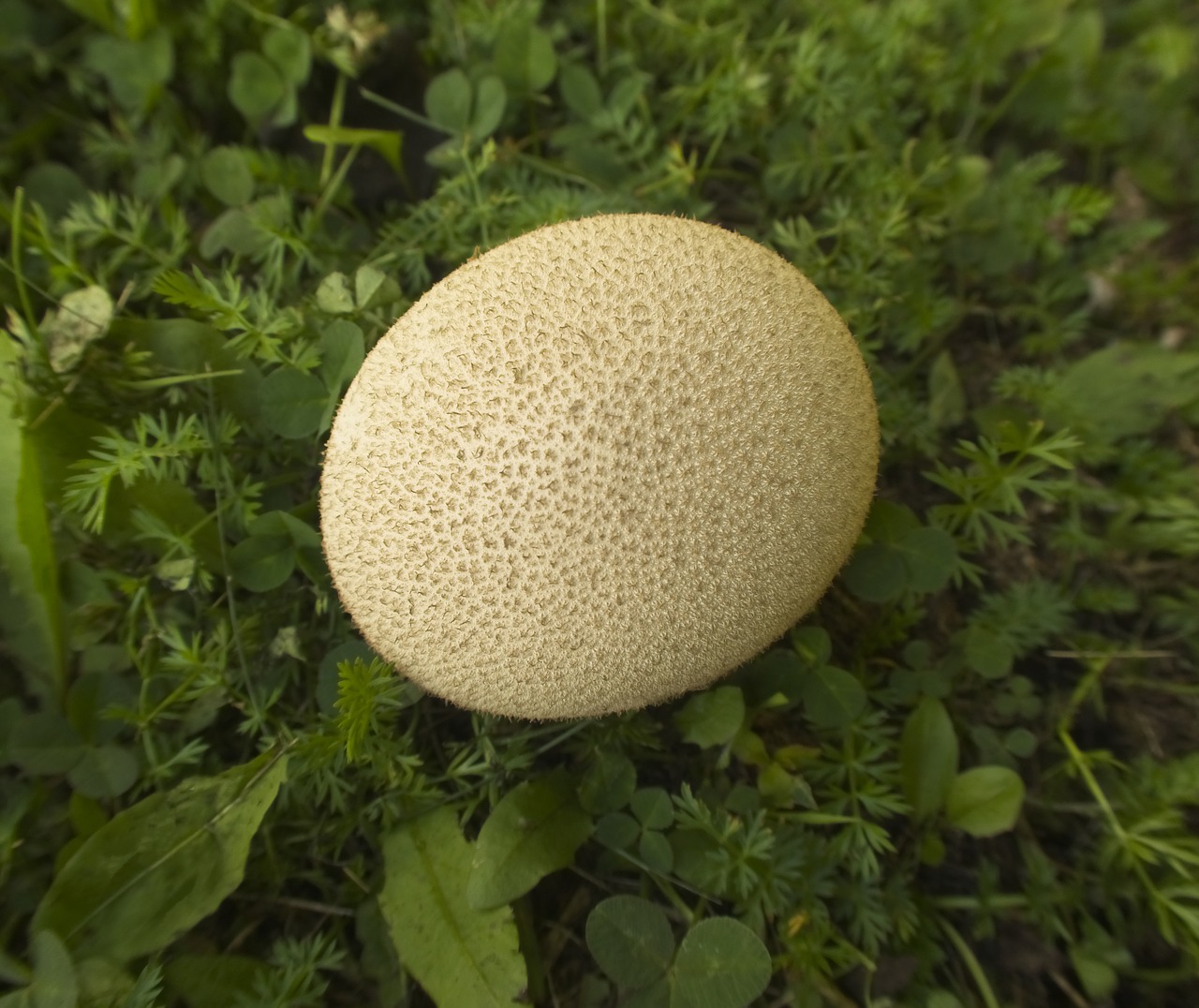 Puffball. Fun name, eh? This is another hodge-podge group of fungi. These mushrooms don’t have a stalk, or gills underneath their heads. Like most backyard mushrooms, these guys aren’t parasitic or infectious. They just exist. These mushrooms release spores through a small opening in the top of their fruiting body. I’m sure many readers have stepped on these mushrooms, releasing a surprising cloud of brown spores.

One kind of puffball mushroom grows up to a foot across. It’s called the Giant Puffball Mushroom (go figure). It can be grilled, made into a flour, or cooked down into a stir fry. While you probably won’t find one of these in your yard, little puffballs up to two inches across are some of the most common backyard mushrooms. 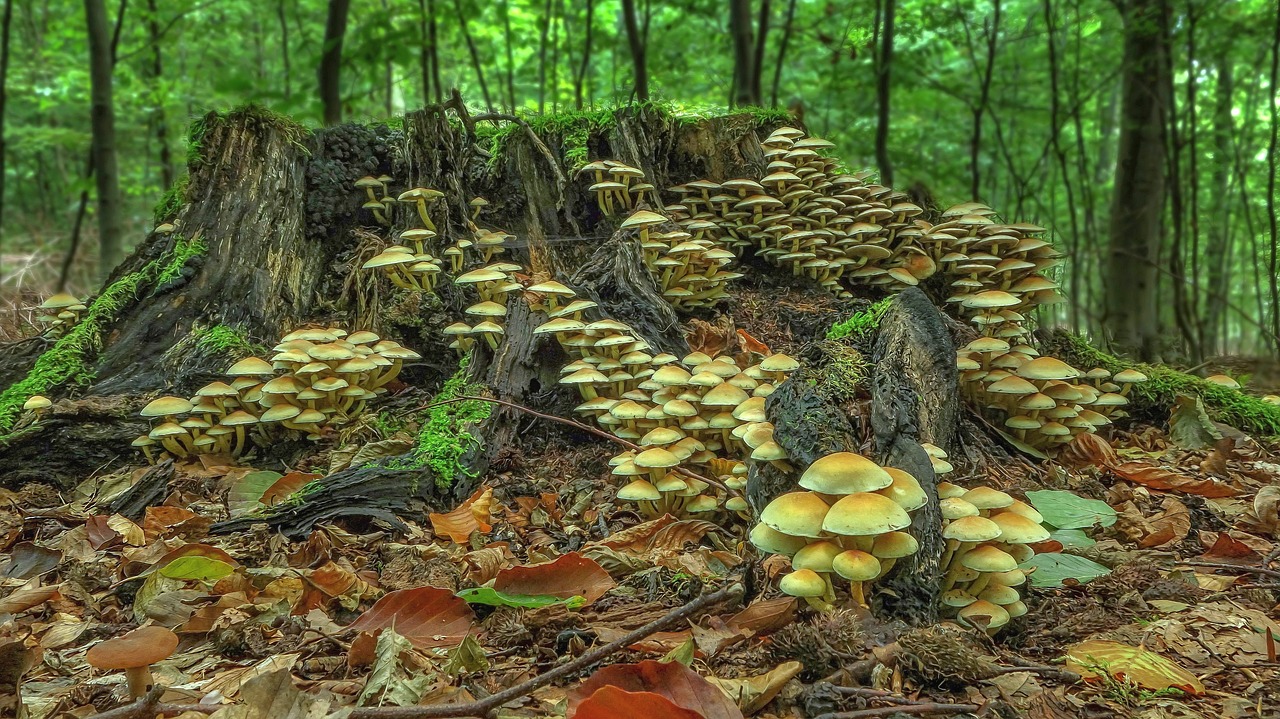 This article only covered three broad categories of the thousands of mushrooms out there. Be curious, and explore websites like this to broaden your backyard mushroom knowledge. Perhaps you are wondering about the possibility of growing mushrooms in your yard? Whatever it may be, we humans have a long, long way to go before we understand much of anything about the fungus among us.